Is there space for a burger on a seafood joint's menu? At Ella's Oyster Bar, which opened in Little Havana in May, the answer is yes. But this isn't your standard Cuban ground round. Instead, crabmeat and spicy Mexican chorizo are combined into a Frankenpatty pepped up with cilantro, lime, and Old Bay seasoning. It's crisped on a flattop and then flipped onto a Cuban roll slicked with chipotle aioli, mimicking the salt and spice of the classic's ketchup and onion. The frizzled potato strings called papitas lend some crunch. Purists might request that the crowning slice of Vermont cheddar be left off.

The place is named for co-owner Christian Plotczyk's daughter. At first glance, it seems to resemble the flurry of oyster bars that have opened (and closed) across town over the past three years. A sprawling azure mural of a menacing octopus fills a back wall across from an open kitchen. The 78 seats surround raw-wood tables next to a whitewashed brick wall adorned with a picture of the Miami skyline. A light fixture spells out the word "oysters" in orange bulbs.

Plotczyk and co-owner Jordan Marano met nearly two decades ago while helping Jeffrey Chodorow's China Grill open a short-lived expansion in Brickell. During the years that followed, the two crossed paths at places such as Jonathan Eismann's original Pacific Time on Lincoln Road and as higherups in the Rosa Mexicano chain. By last October, both were ready to leave the corporate grind for something more personal.

Ella's is designed in a Cape Cod-hipster motif that only hints at Latin America.

"There's no place in Miami like Calle Ocho," Plotczyk says. "Originally, it was more of a straight-up oyster bar with a Miami feel, but once we settled on Little Havana, that changed everything. We knew we needed to do something to make it a neighborhood restaurant."

Ella's may be designed in a Cape Cod-hipster motif, but the decor only hints at influences that also include the Caribbean and Latin America. Take, for instance, the oysters Rockefeller. The classic preparation is modified by whipping creamy, salty sea urchin into the perfunctory butter that glosses the dish. A good, hard squeeze of lime juice cuts the richness while buoying the salty meatiness of plump Arrowhead oysters.

For just-shucked oysters, a chalkboard menu on two separate nights listed three and then four varieties, mostly East Coast. The selection is more modest than those at some other places, but Ella's boasts a delightful mignonette with red wine vinegar, which gives the tincture a sweeter, gentler bite that lends itself well to saltier oysters.

Croquetas here are filled with béchamel-licked shreds of crabmeat encased in a crackly shell. In case these sweet, rich fried fingers of the sea are too healthy for you, lather them up with a pool of Old Bay hollandaise sauce.

Even simpler are the fish tostadas ($12), which include lime-dressed corvina on a crisp tortilla rubbed with crema. A little knot of watercress adds freshness, while crumbled bacon acts as the salt. The dab of truffle oil, however, is unnecessary — these ingredients fare well on their own.

And though the one-page menu lists plenty of busy-sounding dishes (think "chili-queso" pancakes with fried chicken and jalapeño honey), it's the simpler ones, the ones that hold true to diets of people who live near the sea, that make the most sense.

A pair of bulbous, sinister-looking cuttlefish proves the point. The kitchen marinates the cephalopods overnight in salt, pepper, lemon, and olive oil and pops them onto the grill to pick up some warmth and a light char. The results are as soft as perfectly cooked shrimp. They're brightened with a hit of lemon and barely caramelized sugar that imparts a sweetness to complement the brine. A thick slice of red-green tomato is like an exclamation point that adds brightness to each buttery bite.

From there, things get a little more involved. Ella's house chop ($12) is well suited as a plate of greens for the table. Kale is tied up with plenty of biting watercress to liven the woody, still-fashionable brassica. Yet it's the bits of avocado, quinoa, carrots, corn, and sunflower seeds that add sweetness, texture, and ever-changing variety to each bite, seasoned with a peppy serrano chili dressing. 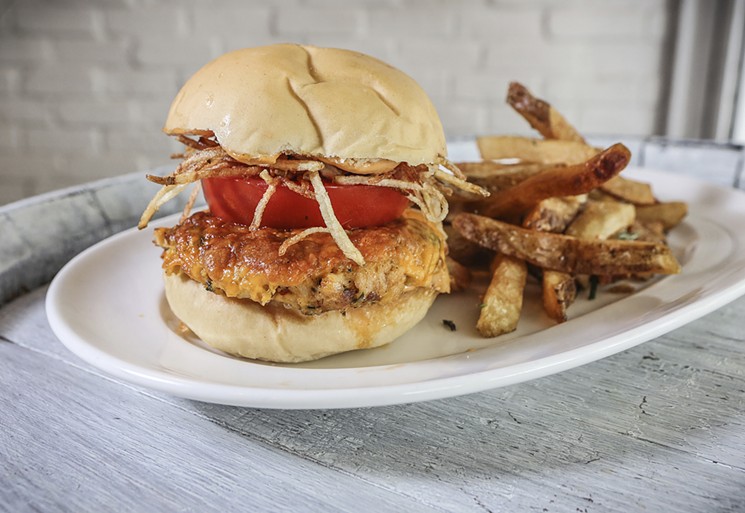 The lobster roll, a hallmark of oyster bars, is the only letdown because it's a missed opportunity. The best part of a lobster roll can be the bun, a hot-dog-like affair with the crust of either side shorn away, revealing a spongy, sweet crumb. This is the surface that's grilled in a deluge of butter, turning it a gorgeous golden brown and soaking the vessel with delicious fat. Ella's replaces the usual roll with a medianoche-style version. It's a clever move because the butter and sugar are already built in. But the bread seems stale and overtoasted, leaving it dry and crumbly. There's also a dearth of lobster, and what is on hand seems to be mostly cheaper claw meat.

However, the Little Havana clam bake, large enough for two, leaves no desire unfulfilled. It's stocked with supple lobster, clams, head-on pink shrimp, and mussels. The broth lacquering it all is like a deep ocean secret, akin to the translucent, eyeless shrimp that live thousands of feet underwater next to thermal vents where the temperature climbs hundreds of degrees above boiling. The brew begins with a light tomato water combined with sake, lemon juice, chives, and butter. Somehow it all emulsifies with the sweet oceanic liquor from the shellfish and the juice from chorizo to yield an assertively rich sauce that's also light as a breath of beach air. Be sure to coat every bite of yellow corn and purple Peruvian potato with it. 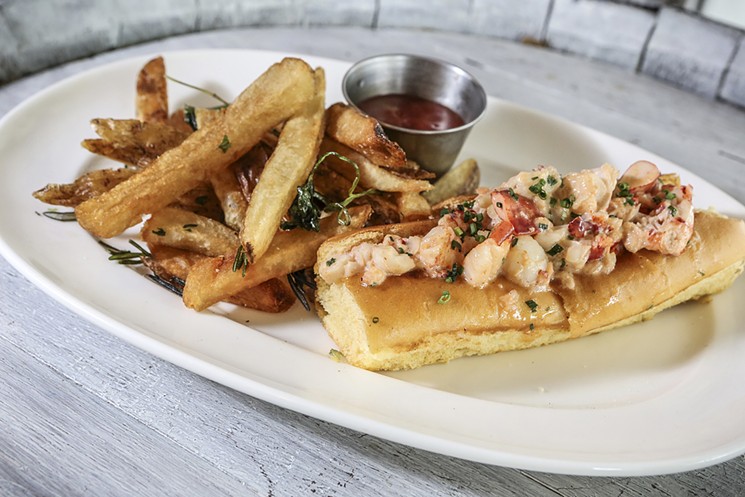 Achieving the same goal at dessert seems unfairly easy. After all, Suzy Batlle's Azucar Ice Cream Company is down the street. The shop supplies a rotating selection of ice cream that often arrives at the table sandwiched between two guava pastelitos ($7). The tamer option is the daily cobbler, which on a recent night contained luscious peaches enveloped in a buttery, cinnamony, sugary sauce crowned with a scoop of creamy pale-yellow manteca ice cream.

Just like everything at Ella's, half of these desserts is something you know and trust, while the other is a new love. The croqueta ($12), the frita ($15), and the clam bake are the proof. Even the lobster roll ($19), if it's polished up, could confirm that New England and Miami can walk together. Whether you're a transplant from the Northeast or simply love cold-water eating, Ella's has little trouble combining the best of both worlds in a way that preserves the strengths of each.