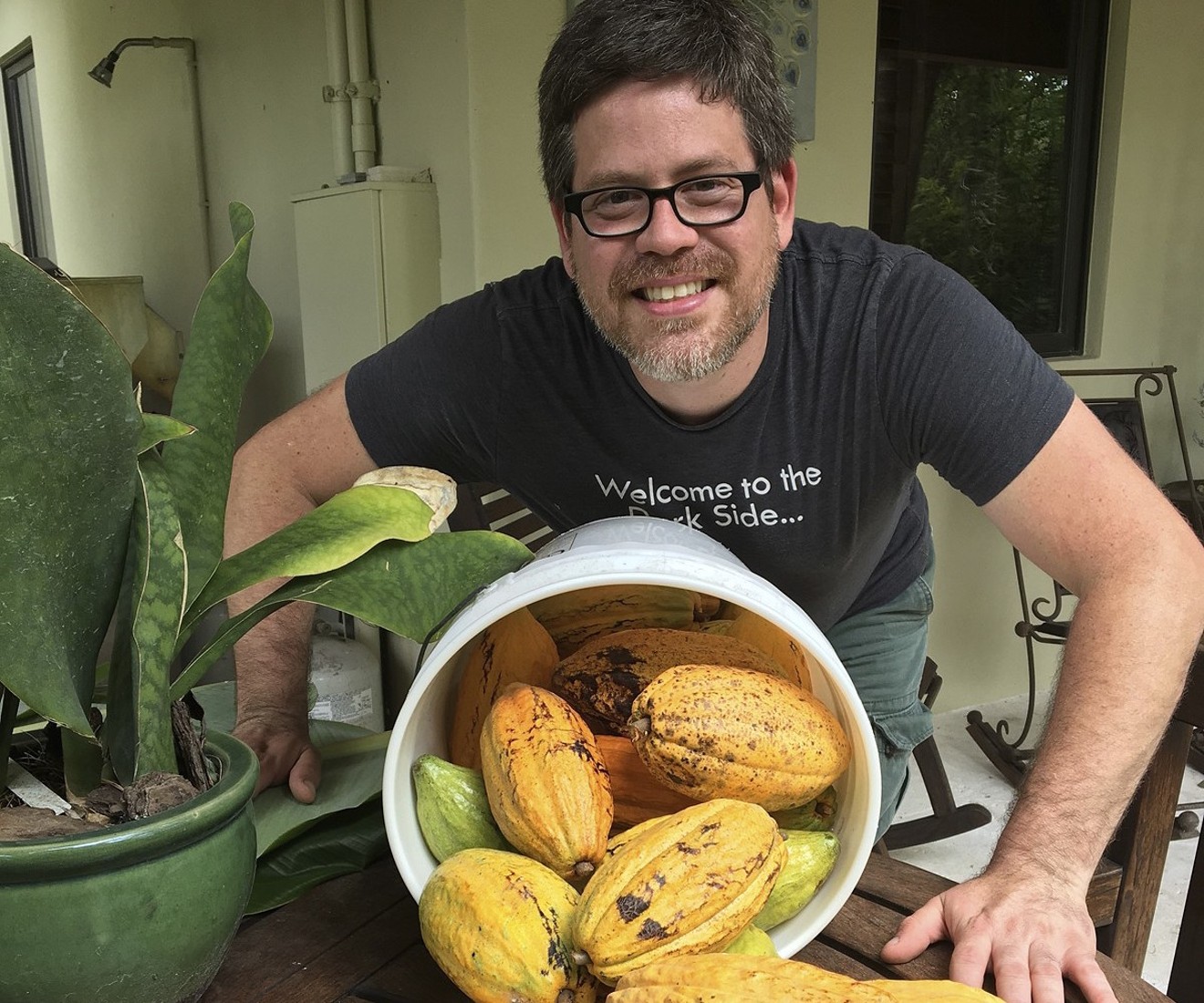 Down south in the Redland, just a long stone's throw from Krome Avenue and the Everglades, 350 cacao trees tower over Patch of Heaven Sanctuary, a 20-acre nature conservation site at 21900 SW 157th Ave. Dozens of yellow and orange oval pods filled with brown cacao beans hang from the branches.

This is one of the very few working cacao farms in the United States.

It's August now, and in a month or so, the pods will be ready to harvest. The beans, removed from the bitter exterior, will be fermented inside small wooden boxes, dried in the sun, crushed, and transformed into homegrown Miami chocolate — which, if all goes as planned, will debut before year's end at Cao Chocolates (9800 SW 77th Ave., Miami; 305-879-0281; caochocolates.com), a shop near Pinecrest owned by self-taught chocolatier Ricardo Trillos.

That brings the potential for big money. Chocolate sales, which account for $20 billion a year worldwide, have hit a sweet spot in the past few years, according to the National Confectioners Association. In 2017, sales of premium and dark chocolate grew 6 percent and are expected to continue to rise.

As of now, Trillos is the only one among them growing his own beans.

But there's a problem. Cacao isn't supposed to thrive in a place like Miami. The trees, found in hot and humid climates across Central and South America and parts of Africa, typically grow 20 degrees north or south of the equator. Miami is at 27, Trillos says. Hurricanes, frequent rainstorms, and winter freezes can kill the trees. In fact, 2017's Hurricane Irma destroyed all of the cacao fruit at the Patch.

But giving up is not in Trillos' blood. Think of the stocky 39-year-old as the Henry Flagler of chocolate. Born in Caracas, he grew up drinking Toddy, Venezuelan chocolate milk. He snacked on chocolate as often as his father, an attorney, and his mother, who ran an engineering company, would allow.

"Chocolate was something we always had around," he remembers.

Trillos never thought chocolate would become his career, though. In high school, he met Anelith Ortega, a brunette with a bright smile and charming dimples, who later became his wife and business partner. In 2004, six years after marrying, the two left Venezuela for Miami in search of opportunity. "It was a big change coming to the U.S.," he says, "but my wife's brother was here, so knowing someone helped."

Trillos worked in human resources, but despite his lack of culinary training, he thought he could make something better than American chocolate. So at home after work, he began experimenting with making small truffles and creamy ganache.

"I Googled recipes, bought a few books, and watched some tutorials," he says. "As I learned more, I started to switch up the recipes to create my own versions."

In 2009, Trillos was laid off. He dove into full-time chocolate-making. "I've always been a dreamer with crazy ideas," he says. "But my wife is even crazier because she said, 'Yeah, let's do it.'"

Ortega, the Miami manager for a Venezuelan toy company, continued working while Trillos launched Cao Chocolates. By 2012, he had opened the shop in Pinecrest. Two years later, Ortega quit her job to work with her husband full-time.

"My wife is even crazier because she said, 'Yeah, let's do it.'"

As Trillos built a following in the area, Patch of Heaven's horticulturists — Fred Hubbard and Roberto Del Cid — bought a few $20 cacao trees at Fairchild Tropical Botanic Garden and planted them in the hammock. The Patch, which preserves plants and wildlife both native and nonnative to Miami, dates back to the '60s when it was owned by the Mathesons, a pioneer family that also owned Key Biscayne. It was sold in the '80s and turned into a petting zoo for about 20 years. In 2008, Pinecrest couple Joyce and Bruce Chesney, who an auto tag agency, began purchasing parts of the land in an effort to restore and transform it into a refuge.

By 2013, the trees planted three years earlier had begun to grow tall and show signs of small pods. So Hubbard, a 50-year-old New Yorker with a thick white beard, and Del Cid, a slender 54-year-old from Honduras, planted more. Two years and more than 100 trees later, they had enough fruit to make chocolate.

"The more we talked about it, the more other horticulturists told us it couldn't be done," Hubbard says. "We heard over and over again how Miami doesn't have the right conditions. But here we are. Our trees have survived the cold and hurricanes."

That's when Hubbard contacted Trillos, one of the only chocolate makers in Miami at the time, and asked if he'd be interested in the beans. "They told me they knew how to plant the trees," Trillos remembers. "But they needed someone to take care of the pods after they were harvested."

Since 2015, Trillos has made a handful of chocolate batches using the Patch's cacao — though he hasn't released any to the public.

"I can't tell you what it was," he says. "I just wasn't totally happy with it. I've really perfected my formula, so I think this year will be the year we launch."

In Miami, once a cacao tree is grown, it takes four to six months for the oval fruit to mature, Trillos says. That time frame is about the same in the Amazon or Africa.

Trillos the ripe fruit and slices it in half. The 40 to 60 brown beans inside each pod are removed along with a fleshy white pulp and then layered inside a custom-built 12-by-12-inch wooden box and wrapped with banana leaves, which kick-starts the fermentation process.

About 48 hours later, Trillos moves the beans to a smaller box for two days and repeats the process again. The beans are then dried in the sun.

"I've been working on my own formula for years," he says. "How long you leave them in each box can change the beans' flavor. That's why it's taken me so long to find the exact process that works."

Trillos expected to produce at least 50 bars with last year's crop. But after Hurricane Irma wiped out the cacao fruit, he had to start over. "We couldn't find a single fruit," he says.

When Trillos is not on the farm, he's busy producing other chocolate inside his store using beans sourced from Venezuela, Honduras, and Brazil. He says he personally visits with farmers and generally purchases about two pounds of cacao beans for $7.

"Beans from Honduras are woody and smoky," he explains. "Others, like from Venezuela or Brazil, are nutty and a little sweet. It depends on the country, the soil, and the fermentation process."

Back at Cao Chocolates, Trillos' small and charming store is stocked with dozens of brightly wrapped cacao products. Everything is made onsite, from chocolate bars featuring cacao from different countries to dark-chocolate-covered almonds, truffles, and bonbons filled with toasted coconut or almond chocolate cream. Prices start at $5.

His chocolate is used at restaurants such as Edge Steak & Bar and the Ritz-Carlton Key Biscayne. It's also sold at Books & Books, Jackson Hall, and Miami International Airport. He and his wife also host and wine tastings, as well as monthly chocolate-inspired dinners at the Patch.

By the end of September, Trillos plans to harvest this season's cacao trees. In the next year, Hubbard and Del Cid expect to plant nearly 1,000 more trees.

"Everyone thinks they're a chocolate maker," Trillos says. "They have no idea. And still people think you can't grow cacao in Miami, but look where we are now."