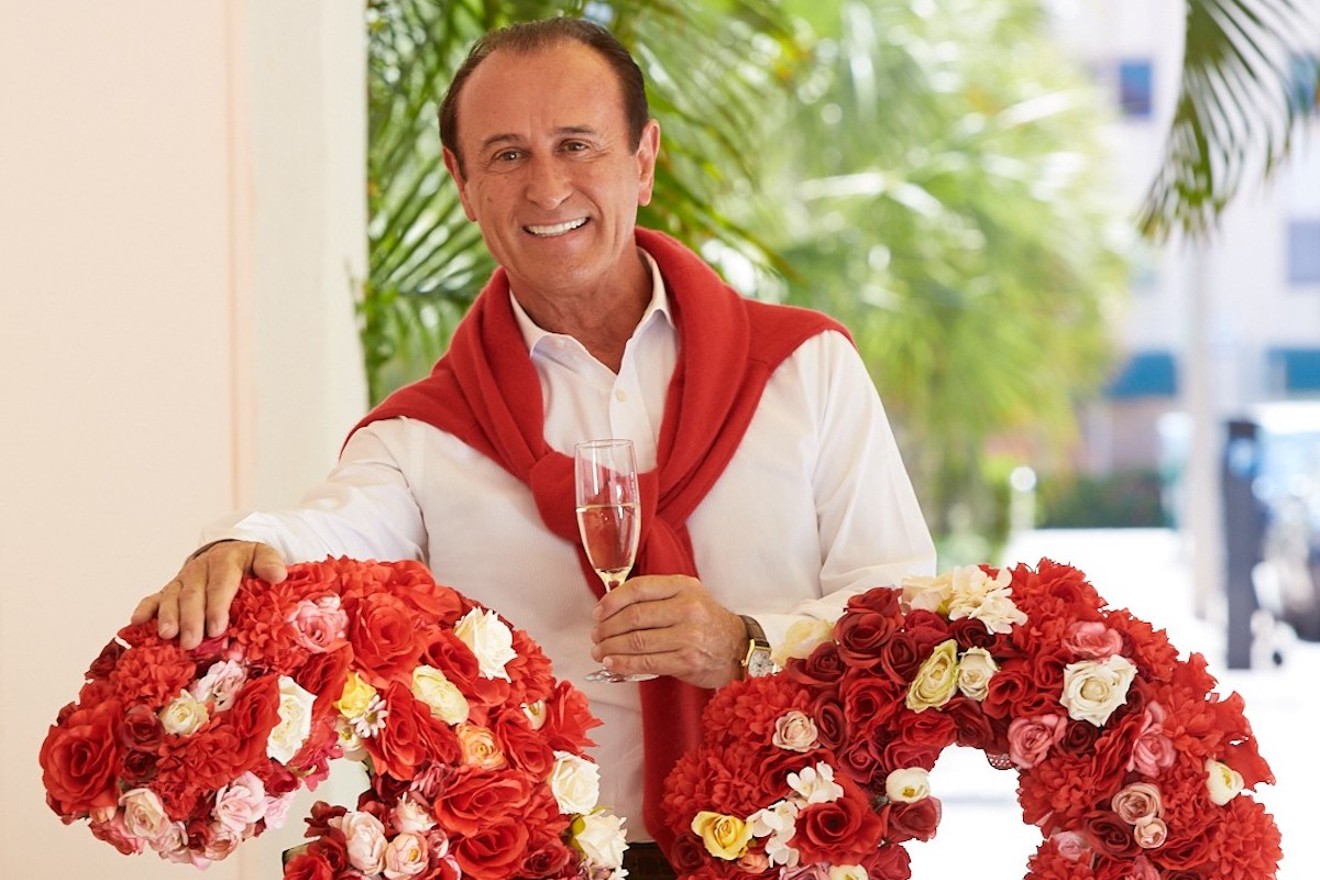 Caffe Abbracci's Nino Pernetti Lynn Parks
Ask anyone in Coral Gables for a restaurant recommendation, and chances are Caffe Abbracci will be at the top of the list. Known for its Northern Italian specialties and topnotch service, the Italian eatery is turning 30 this month.

How does a restaurant keep its status as one of Miami's best-loved culinary destinations?

It treats its staff and all who visit the restaurant like family, according to Caffe Abbracci's founder and owner, Nino Pernetti. "I look after my restaurant like it's a 2-year-old toddler," he says.

ce opening Caffe Abbracci in 1989, Pernetti has walked the dining room daily, getting to know his customers and ensuring his staff extends the same respect and warmth to regular guests and celebrities alike. When Robert Redford visited for the first time, Pernetti greeted him like a friend: "I'm finally glad the man who everyone says looks like me is here." He said that greeting prompted a loud laugh from of one of his favorite actors.

Sports stars such as LeBron James and Pelé and Hollywood A-listers such as Al Pacino have dined there. Emilio and Gloria Estefan are regular clients, and politicians Rick Scott and Jeb Bush have also been spotted at the eatery. Asked to share amusing stories or dietary quirks about the luminaries who frequent his establishment, Pernetti politely declines to comment, saying only that he wants to keep the restaurant a safe haven for an eclectic crowd. "It's meant to be a spot for regular customers, a constant destination like in Italy, where people come into their favorite eatery every day. Diners have stuck with us over time because they are treated like family."

A native of Lake Garda in the Lombardy region of Italy, Pernetti began his career in the hospitality industry at the age of 13 as a barista in his hometown. The several years he spent working for hotels around the world taught him two things: Miami was where he wanted to live, and dealing with people on a daily basis is what he wanted to do. He borrowed money from a friend and set his sights on Florida.

Pernetti, who turns 74 today, runs Caffe Abbracci with the same two original managers and a loyal staff of 17 longtime employees. He has always rejected the idea of opening a second location because he believes his presence at the restaurant and dedication to the customers have kept the eatery going for 30 years.

"He acts as if he were another employee," manager Eduardo Gutierrez says. "He's here day and night, and if he's gonna be a few minutes late coming in, he calls to let us know."

In the beginning, Pernetti's aim was to bring modern Italian cuisine to Miami by introducing simple ingredients that were rare when the restaurant opened: balsamic vinegar, mozzarella, salumi, and good olive oil for dipping bread. "Back then, the only rice most people knew was the one offered at Chinese restaurants. I was like Christopher Columbus when he voyaged to the Americas — I just kept on sailing," he says. "I took one day at a time and thought short-term." The decor at Caffe Abbracci changes every five years.
Photo by Ana Adams
As grew, the menu evolved. "Food is like fashion. You have to go with what people like," Pernetti notes. "You have to adapt it to look and taste the way people want in a given moment." For the past five months, the restaurant's new chef, Salerno native Antonio Alfaro, has been refreshing the menu and helping to keep it current by using ingredients such as farro, raspberry and tomato sauce, and less popular fish such as John Dory and turbot.

But guests can still order some of Caffe Abbracci's original items, such as the boccacino melted mozzarella with port wine and mushroom sauce ($14.50) — and the dish named for one of Pernetti's daughters, tortellini Tatiana, made with asiago cheese, pear, and prosecco pink sauce. Other signature dishes, such as veal with tuna-mayonnaise sauce ($13.75) and red snapper "" baked in parchment paper with vegetable and potatoes ($28), have also become permanent favorites.

To compete with Miami's steady stream of restaurants, Pernetti says he's also been vigilant about refreshing the interior design every five years so that "old customers will feel they are walking into a new restaurant." Caffe Abbracci's original vaulted ceiling is now flat, and chandeliers and paintings have been added to the decor. Because the dining room has no windows, a rotating choice of colors illuminates the space.

Though the vision for his restaurant has remained constant, the city in which it resides has changed dramatically since the late '80s, the restaurateur says. "When I opened it, there was close to nothing going on in Coral Gables. You could play tennis in the middle of the street. Now it's become a metropolis for foodies of all ages."

Though restaurants in Coral Gables have come and gone, Caffe Abbracci remains a constant because of one basic rule, Pernetti says. "Our focus will always be on the food and making sure our customers get good value for their money. A restaurant can be the trendiest place with the splashiest fare, but if the food fails, it won't survive."

As for the next 30 years, Pernetti doesn't anticipate any major changes to his operation or retirement for himself. "I'm happy to come in . I feel like I'm on a stage: I dance, I kiss, I talk, I have a very good time. It is very gratifying to hear millennials tell me they come in, because if my restaurant was good enough for their grandparents, it's good for them too."

Caffe Abbracci. 318 Aragon Ave., Coral Gables, 305-441-0700; caffeeabbracci.com.
KEEP MIAMI NEW TIMES FREE... Since we started Miami New Times, it has been defined as the free, independent voice of Miami, and we'd like to keep it that way. With local media under siege, it's more important than ever for us to rally support behind funding our local journalism. You can help by participating in our "I Support" program, allowing us to keep offering readers access to our incisive coverage of local news, food and culture with no paywalls.
Make a one-time donation today for as little as $1.
Juliana Accioly
Contact: Juliana Accioly