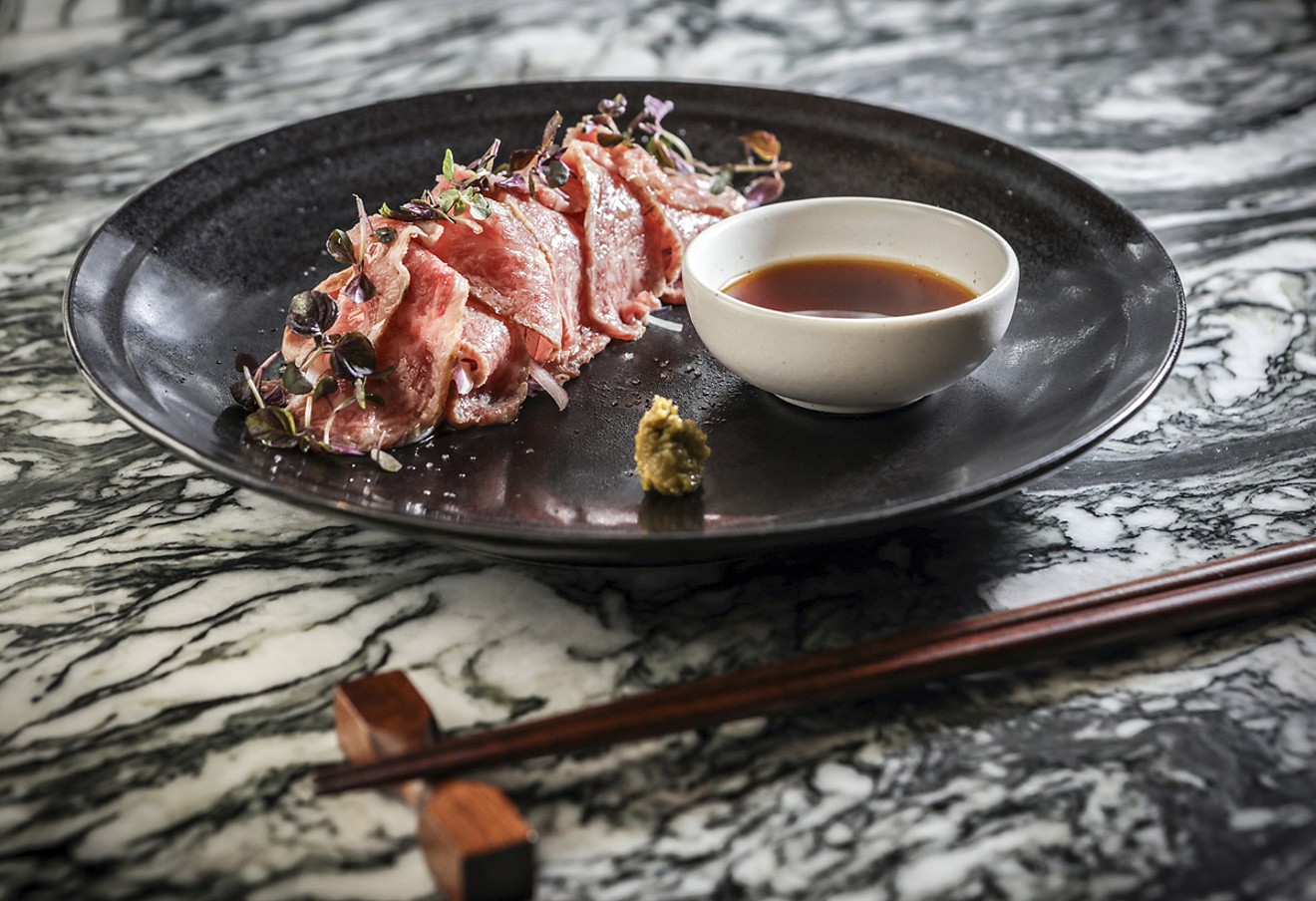 What comes to mind when you think of Ocean Drive? Overpriced frozen margaritas? Rowdy, scantily clad revelers? The weirdest traffic jams on the planet?

Well, try this on for size: a hushed place where your order is taken promptly and food arrives quickly. You'll be checked on periodically and, once your meal ends, encouraged to lounge at the table — for a few minutes or even hours.

It's called omotenashi, Japanese for "selfless service." It's based on the notion that a diner's needs should be met without a verbal request and that servers should show complete sincerity. No fake smiles here.

Just up the block from Nikki Beach, Azabu (161 Ocean Dr., Miami Beach; 786-276-0520; azabuglobal.com) is based on a sister concept in New York City's Tribeca neighborhood that earned a Michelin star for serving traditional and somewhat affordable omakase in an underground speakeasy. Miami's Azabu, which opened this past January and is named for a residential street in Tokyo, is decidedly more casual despite its practice of omotenashi. The restaurant defies the usual limitations on classic Japanese cuisine by offering large portions of Tokyo comfort food at reasonable prices with exceptional service.

Located in the Stanton Hotel, Azabu is owned by Plan Do See, a company that has operated more than 30 bars, restaurants, and other venues across Japan for a quarter-century. In 2008, the group opened Azabu New York. Since then, it has added restaurants and hotels in Chicago, Los Angeles, and, most recently, Miami. At the Stanton, the firm also owns Lolo's Surf Cantina, serving Baja-inspired street food since its opening in January 2017.

"Coming to the United States," says Mahmood Abousalem, Plan Do See's Miami managing director, who previously oversaw operations at the Delano, "was the company's way of bringing and introducing omotenashi across the world."

The restaurant's entryway is located on the left side of the Stanton's lobby and covered by a pair of midnight-blue drapes. They serve as a border between the chaos of South Beach and the sophistication of Japanese dining. Once inside, you'll snack on deep-fried tofu, bacon-wrapped vegetable skewers, and tender chicken bites in sweet soy, all for about $35. 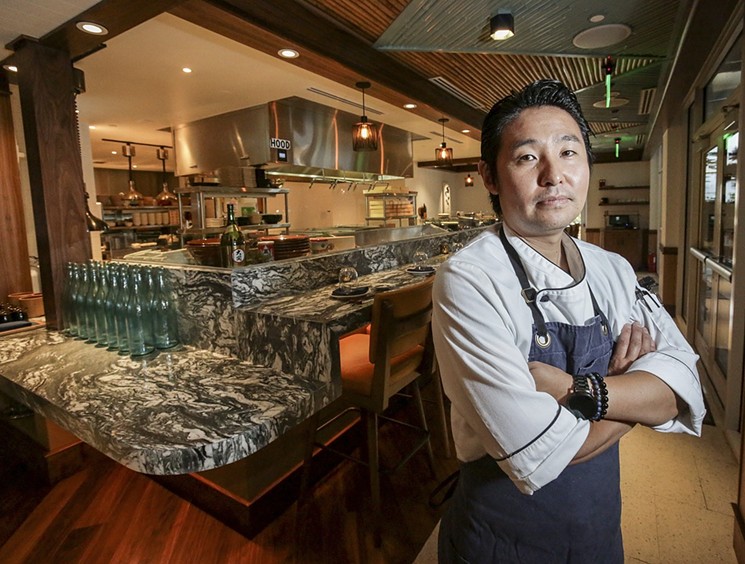 "Not all of it is traditional," Abousalem says. "But we want to offer an experience that's attractive to everyone."

Unlike the New York City flagship, the Miami Beach outpost includes a large main dining room with 80 seats, wood decor, and an open kitchen. Adjacent to the dining room, a secluded sushi den provides a more intimate experience. The 11-seat bar, which requires reservations, offers a higher grade of omakase-style dining with seafood flown in from Japan.

Every meal begins with a warm hand towel that's quickly picked up by the elegantly dressed waitstaff. Then comes a sake and whiskey menu that includes more than 40 varieties. On a recent evening, a $26 carafe of Junmai Ginjo's Fukuju Blue sake tasted bitter. Informed of the disappointing flavor, the waiter removed it from the bill without question. A better choice was the Haru cocktail, a bright and light drink containing mint lemongrass shochu, matcha tea, and yuzu ($16). Forgo alcohol with the Shuwa Shuwa, a bubbly concoction made with apple juice, lemon, and ginger ale ($9).

The kitchen is led by 39-year-old, Tokyo-trained chef Masatsugu "Masa" Kubo. Much of his menu, which is divided into 11 sections, is cooked on a robata, a Japanese charcoal grill, using binchotan coal heated to 1,832 degrees Fahrenheit. Plates are served izakaya-style, which means a variety of small, sharable items.

Start with a selection of hot and cold appetizers, such as the agedashi tofu ($12). Served in a large bowl, chunks of tofu and eggplant are flash-fried with potato starch, placed in a warm dashi broth, and topped with grated daikon radishes ($12). The crisp golden-brown tofu cubes create a more exciting flavor than the soft tofu used in a traditional miso soup. 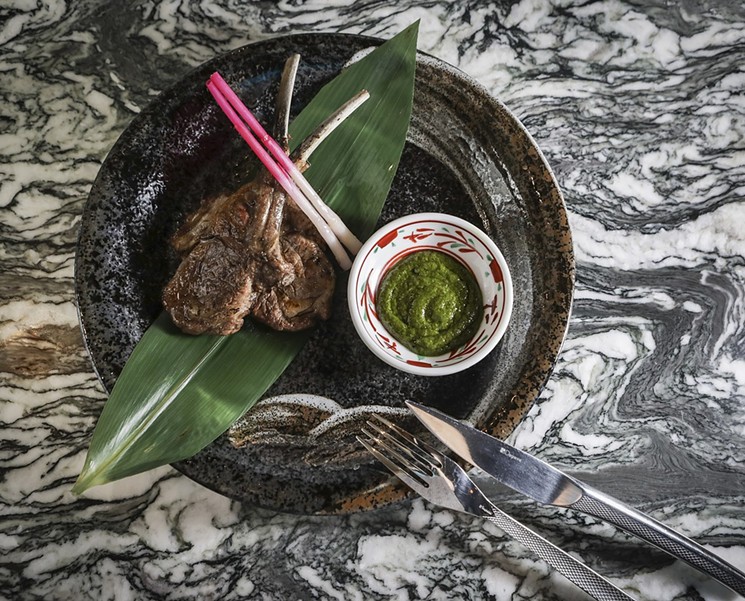 The star of Azabu's appetizers is the tomorokoshi tempura curry salt, inspired by a dish served at a local restaurant in Fukuoka, Japan. Slices of corn are fried in tempura batter, resulting in a crunchy shell to be dipped in the spice-heavy salt ($9). The curry salt, which blends nicely with the corn's sweet finish, is on par with what you'd expect at a quality Indian restaurant.

"When you think of curry, you don't think of Japanese food," Abousalem says. "It's actually very popular in Japan, though. And this recipe is the chef's grandmother's."

Move on to the larger items, including robata-grilled meats and vegetables. You'll notice much of Azabu's produce is placed on skewers and wrapped in bacon. The treatment is trending at izakayas in Japan, according to chef Kubo. "The juice from the bacon seeps into the vegetable," he explains. The result is heavenly. Try the asparagus or zucchini skewers, which burst with meaty flavor ($10).

As for meat and seafood, consider the yakitoro momo, in which plump and juicy pieces of grilled chicken thigh are placed on a skewer and doused in a sweet soy ($12). The tarabagani kanimiso maki brings two tender king crab legs with a light crab miso sauce, which accentuates the crab's sweetness ($30). There's also a distinctly Miami plate of two lamb chops served with Japanese chimichurri, which adds scallions and toasted sesame to the South American recipe ($26).

The restaurant also offers filet mignon and a porterhouse, priced at $80 and $130, respectively. Both come seasoned with truffle salt and ponzu and are grilled on the robata, which sears the meat and creates a crisp, smoky crust.

As expected, a wide selection of maki, sashimi, and nigiri is available ($6 to $58). The fish is high-quality, much of it flown in regularly from Japan. Expect spicy tuna and beef tataki rolls, as well as sashimi and nigiri platters of tuna, salmon, toro, and amberjack. Flavors can be robust, but overall the sushi is average.

Excitement returns with dessert. A mountain of shaved ice arrives drenched in strawberry syrup and condensed milk ($12), and the Instagram-worthy raindrop cake captivates with a clear Jell-O dome topped with brown-sugar syrup ($9). A rather traditional chocolate cake with cream and vanilla ice cream boasts a satisfying mousse-like texture ($9).

Azabu is an antidote to Ocean Drive lunacy, a retreat with excellent food and personable service. If cost usually prevents you from enjoying South Beach's more upscale options, Azabu eliminates the barrier by offering many plates for less than $20. Amid Miami's growing trend of secret sushi bars and fancy fish at high prices, Azabu is a welcome surprise. After a meal, it becomes what you wanted all along.

"We are authentic," Abousalem says, "but more so, we are approachable."