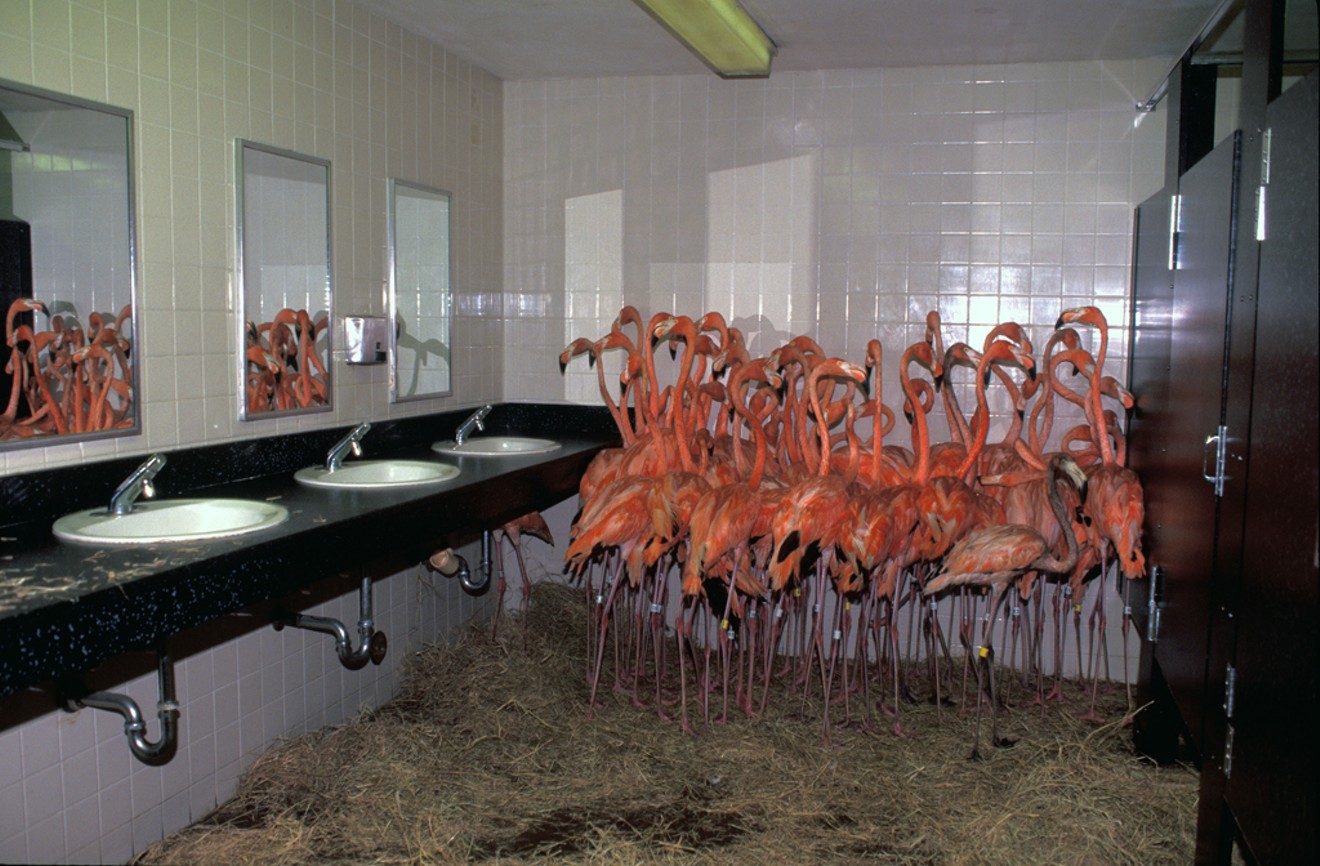 Flamingos huddled in the men's room at Zoo Miami during Hurricane Andrew. Ron Magill/Zoo Miami
In 1992, as Hurricane Andrew roared toward South Florida, at Zoo Miami found an unlikely place to house its 30 flamingos: the men's bathroom. Ron Magill, then the assistant curator, was walking out the door after helping get the birds situated when he turned around to take one last look. He was struck by the sight.

"I thought, Who would have ever thought these flamingos would be next to urinals looking at themselves in the mirrors?'" recalls Magill, now the zoo's communications director. He grabbed his camera to take a picture, which would become one of the most iconic images from the historic storm.

With Hurricane Irma now barreling toward South Florida, employees at the zoo have been working almost nonstop to make sure all the animals are safe, Magill says. None are being evacuated — such a relocation can be dangerously stressful for animals — though some will go inside concrete buildings. And this time around, the flamingos aren't headed to the bathroom.

"I think I've gotten that question no less than 100 times in the last few days: 'When are we putting the flamingos in the bathroom?'" Magill says. "That was just us using what we had available."

After Andrew, a concrete holding block was added to the flamingo exhibit. It's designed for major storms, Magill says, and will house the flamingos as Irma approaches.

The anxiety of a new environment can be deadly, Magill says. So the zoo doesn't move animals unless a storm is Category 3 or greater. In an effort to minimize the amount of time the animals spend in unfamiliar surroundings, the zoo is holding off on most of the Hurricane Irma relocations until first thing Saturday morning.

"People don't realize an animal can die from the stress of moving them," Magill says.

Those being moved indoors include large birds in the aviary and small mammals in holding areas that aren't made of concrete. Animals in enclosures made of netting are also on the move because the netting might not be able to withstand items the wind picks up and hurls.

Though Zoo Miami was devastated by Hurricane Andrew, Magill says most of the animals survived without a scratch — including all 30 of the flamingos.