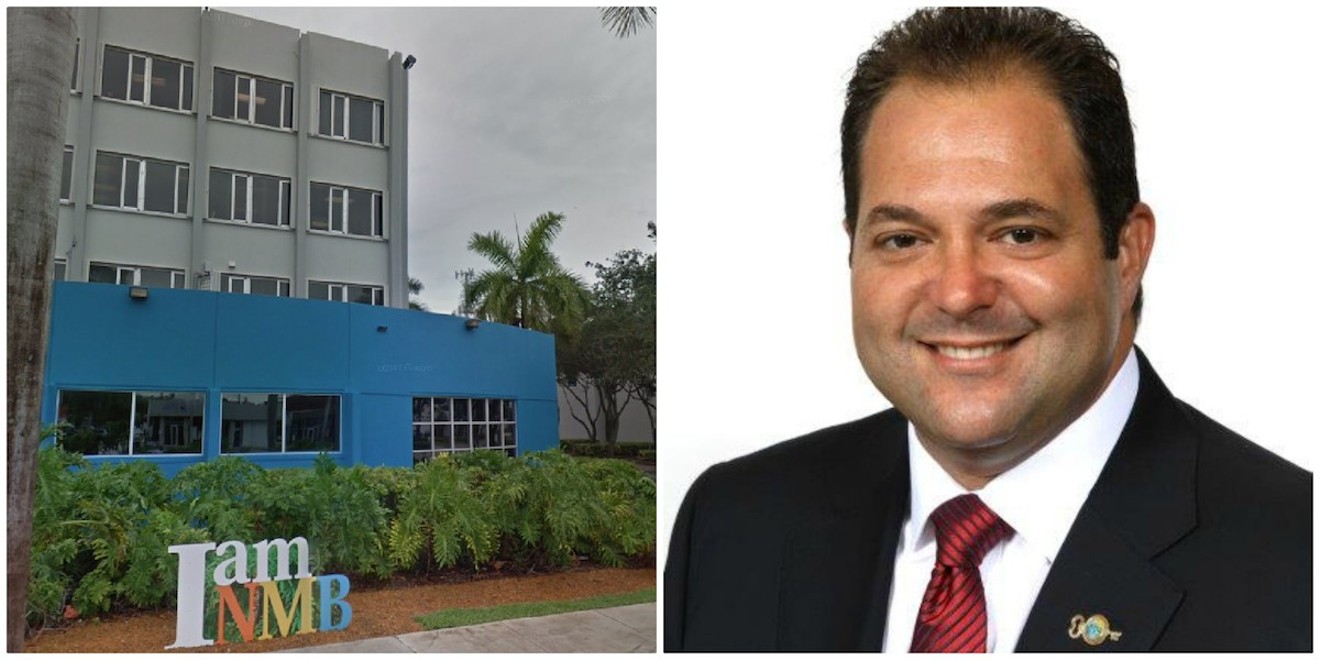 North Miami Beach Commissioner Anthony DeFillipo plans to run for mayor. Photos: Google Maps / City of North Miami Beach
North Miami Beach, one of Miami-Dade County's most corrupt municipalities, recently handed off its public sanitation services and water utility to private companies amid cries of graft and unfair bidding. The FBI even investigated the water deal at one point.

But now the two companies that won those private contracts to take over the city's waste and water — Waste Management and CH2M Hill Engineering, respectively — are funneling campaign donations to a North Miami Beach candidate who was a key player in backing those privatization deals. Both companies have given maximum $1,000 donations to Anthony "Tony" DeFillipo, who loudly supported both privatization deals.

"Residents deserve to trust that their public servants are working in their interest," says Robert Dempster, who is running against DeFillipo for mayor and has pledged to ban city contractors from donating to candidates. "There's no way for them to do that if you vote for something one year, and then that company gives out the maximum possible in donations that the company can make to you. It's absurd, and it's beyond poor judgment."

DeFillipo, though, insists there's nothing unseemly about taking campaign cash from a company he helped via a key vote. "The bottom line is these are legal campaign contributions, and the conclusions you have drawn are simply ridiculous," he said in an email. "There is no quid pro quo."

Spokespeople for CH2M did not immediately respond to New Times' requests for comment. A Waste Management spokesperson in Florida stressed that the company's actions were above-board.

"Waste Management has been pleased to be the environmental services provider for the City of North Miami Beach since 2015," the company's South Florida spokesperson, Dawn McCormick, said. "As an engaged corporate citizen supporting good government, we participate in the political process and follow all federal, state and local laws in doing so.”

In the most bizarre case, candidate Ketley Joachim reported receiving two $1,000 checks from CH2M this election cycle. Cashing both checks would violate the city's $1,000 cap on donations from individuals. Joachim stated she received a $1,000 check from a company listed as "CMH2" August 23, 2018, and then another $1,000 from a company correctly listed as "CH2M" September 4. Both contributions came from Englewood, Colorado, where the company is headquartered.

But these kinds of donations — from contractors to the very people who approve their lucrative contracts — are straight-up illegal in some other cities in Miami-Dade. Contractors who do city business are barred from donating directly to commission races in Miami Beach. In 2016, a similar law nearly passed in Miami-Dade County, but the county commission voted down that proposal.

But contractor donations are still legal in North Miami Beach, and many candidates are reaping the benefits — particularly thanks to its privatized water and waste services.

In 2015, the city voted 6-1 to outsource its sanitation department to Waste Management of Florida, a local offshoot of the $14.5 billion sanitation giant based in Houston. The deal drew heavy pushback from the local AFSCME workers' union, which staged protests outside city hall. Workers argued that the private company would try to cut costs by laying off union workers.

Then, in 2017, the city moved to privatize its water utility, which served nearly 200,000 people in multiple cities, not just North Miami Beach. The leadup to that vote was even more contentious.

AFSCME union representatives called that plan outwardly corrupt and noted the supposedly "failing" water plant had been given numerous state-level awards only a handful of years earlier. Critics argued that the city, led by Mayor George Vallejo, hired outside consultants to craft skewed reports that made the plant look like it was in a shambles. (Vallejo later pleaded guilty to separate campaign-finance violations and resigned.) New Times even confirmed that the FBI investigated the privatization deal, though no one was ever charged with criminal wrongdoing.

Despite the fact that the city's Public Utility Commission refused to support the plan, the city commission voted in May 2017 to hand control of the water plant to CH2M Hill. The firm Jacobs Engineering bought CH2M last December. DeFillipo had already taken $500 from CH2M before voting for the water plan.

Those two contractors are now sending maximum donations to candidates in almost every 2018 city commission race. Local lawyer Michael Joseph, for example, also accepted $1,000 from Waste Management. Reached via phone, Joseph said that the check came in as part of a larger fundraiser and that he was not aware Waste Management held the city's sanitation contract. He stressed he's endorsed by the AFSCME union and the Miami-Dade County Democratic Party and supports union workers.

"I'm a labor guy!" Joseph emphasized. "This is a drop in the bucket compared to everything else I've raised. I don't need the money." (Though he declined to commit to returning the donation.)

Dempster, though, is running for mayor in part on a platform of forcing elected officials to recuse themselves from any votes that could affect their campaign donors. He also said he would support a measure banning donations from city contractors.

"This is incredibly important, and it's one of the things that motivated me to get into the race," Dempster says. "The residents of North Miami Beach, with the recent history of corruption here, have not been able to trust that their elected officials are actually representing their interests."
KEEP MIAMI NEW TIMES FREE... Since we started Miami New Times, it has been defined as the free, independent voice of Miami, and we'd like to keep it that way. With local media under siege, it's more important than ever for us to rally support behind funding our local journalism. You can help by participating in our "I Support" program, allowing us to keep offering readers access to our incisive coverage of local news, food and culture with no paywalls.
Make a one-time donation today for as little as $1.