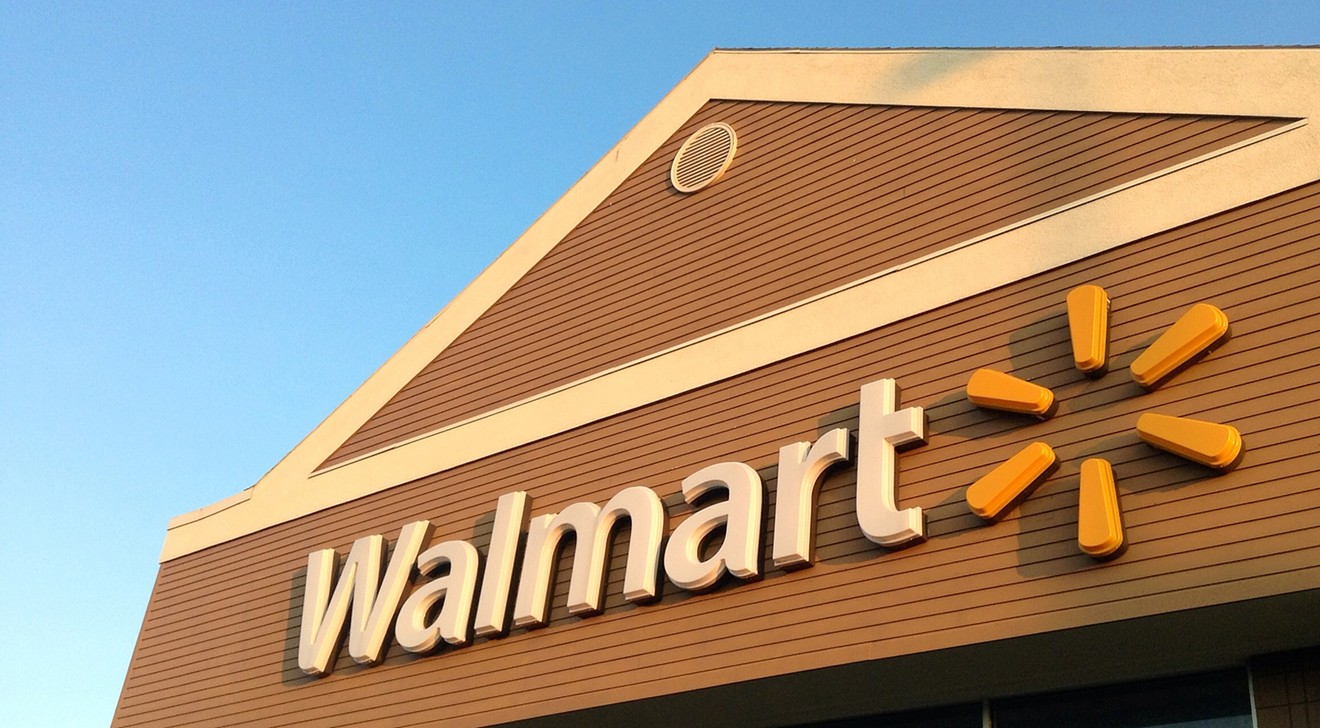 Mike Mozart / Flickr
A group of female workers has been fighting for nearly two decades to force Walmart, America's largest employer, to recognize what workers say is clearly a gender-based pay gap. In 2001, Betty Dukes spearheaded a class-action lawsuit alleging she and other women had been regularly passed up for raises and promotions. The case made it to the U.S. Supreme Court, which in 2011 invalidated Dukes' lawsuit on technical grounds in a highly controversial ruling. Since then, many of the women have filed new class-action suits across the nation.

This past February 1, nearly 100 women filed two legal complaints against Walmart in the U.S. Southern District of Florida. Many are Florida residents who say they were funneled into lower-paying jobs in some instances because of outright sexism from managers.

In one case, Lisa Rohdy of Brevard County says she was told she "was not cut out" for  because she "had children" and they were "her priority." In a different case, Kimberly Sparks of Glades County claims she was told her store needed "a man to do this job if we want it done right.” In yet another instance, Jacksonville resident Pamela Peck said she was supervising men who were being paid more than she.

Other women say they were hired at minimum-wage levels despite the fact that men hired for the same positions were making starting salaries of $14 to $21 per hour.

"Managers in the store(s) where Plaintiffs have worked, and managers who supervised those stores, justified denying promotions to women or paying them less than their male employees because of perceived family obligations of the women and male responsibility to support their families or because of their presumed inability to relocate," a portion of one lawsuit reads.

Via email, a Walmart spokesperson disputed the women's numerous complaints and claimed they were not representative of what most women experience while working at Walmart.

“Walmart has had a strong policy against discrimination in place for many years, and we continue to be a great place for women to work and advance," LeMia Jenkins, Walmart's director of national media relations, told New Times via email. "The allegations from these plaintiffs are not representative of the positive experiences that millions of women have had working at Walmart. We’ve said all along that if someone believes they have been treated unfairly, they deserve to have their timely, individual claims heard in court. We plan to defend the company against these claims.”

But the suit alleges the company has dragged its feet in implementing anti-discrimination measures. The plaintiffs allege managers receive "regular reports about compensation for hourly and salaried employees within the store(s) where Plaintiffs have worked, showing that female employees are paid less than men on average." In many cases, the women allege male managers have been aware of pay issues but failed to fix them. Some female employees allege Walmart uses discriminatory formulas to set starting wages for positions ranging from store clerk to manager.

Many of the women have been to receive compensation for issues that in the late 1990s or early 2000s. The suit says that until 2004, Walmart had no procedures in place to punish or reprimand managers who failed to meet diversity goals.

Walmart barely skated by the 2001 Dukes case. Dukes was a former Walmart greeter who at the time was working at a store near Oakland, California. Her lawsuit, on behalf of as many as 1.5 million female Walmart employees, nearly succeeded, but in a controversial 5-4 decision, the Supreme Court ruled in 2011 that Dukes' suit had not properly listed a "class" of plaintiffs who had facts in common.

Conservative Justice Antonin Scalia, who ruled repeatedly against cases before his death in February 2016, said it was implausible that a company of Walmart's size could coordinate discrimination to the extent that Dukes alleged.

"In a company of Wal-Mart’s size and geographical scope, it is quite unbelievable that all managers would exercise their discretion in a common way without some common direction,” he wrote in the court's majority opinion.

Dukes died in 2017 at the age of 67. In an obituary, the New York Times wrote that she "helped draw attention to the working conditions of low-paid workers in so-called big box stores that dominate the retail landscape." Her niece called Dukes "a voice fighting for equal rights and against racial and gender discrimination in the workplace."

But though Dukes is now gone, many of the women who joined her case are still around and still upset about the treatment they say they received at Walmart. The vast majority of the women are Floridians: Iris Marchard, a Broward County resident, says she began working for Walmart in 2000 and was promoted to the store's jewelry counter. She then repeatedly asked the store's managers when she could earn another promotion. She says she was told her store "needed her" to stay at the jewelry counter. In the meantime, male co-workers were promoted. Connie Gamarra, one of the few plaintiffs from Miami-Dade County, says she had to "fight for raises — even just a $0.03 raise," while men never needed to struggle in the same way.

In some cases, women came to Walmart with prior experience but were allegedly still treated poorly. Diane Johnson, a Lee County resident, has a criminal justice degree and says she used to work as an overnight clerk for the Lee County Sheriff's Office. She eventually became a store assistant manager at Walmart — but found out that male assistant managers with less experience were making more money.

Another woman, Catherine Hern of Fort Pierce, says she was told that if she wanted a raise, she would have to agree to transfer to a store farther from her home.

Worse yet, many women reported outright sexist statements from managers or bosses. Rohdy, from Brevard County, says that after she became pregnant, a store manager asked, "Why can’t you be like those Vietnamese women who have a baby, drop it, and keep working?”

But perhaps no other case encapsulated the issue quite like that of Hernando County's Lucy Giacobbi Sotomayor Ray, who worked for Walmart from 1996 to 2010. She was a single mom who says she did the work of three men. When she asked why one of her raises was so small, she was allegedly told, "If you were a man, you would have received a larger raise.”
KEEP MIAMI NEW TIMES FREE... Since we started Miami New Times, it has been defined as the free, independent voice of Miami, and we'd like to keep it that way. With local media under siege, it's more important than ever for us to rally support behind funding our local journalism. You can help by participating in our "I Support" program, allowing us to keep offering readers access to our incisive coverage of local news, food and culture with no paywalls.
Make a one-time donation today for as little as $1.