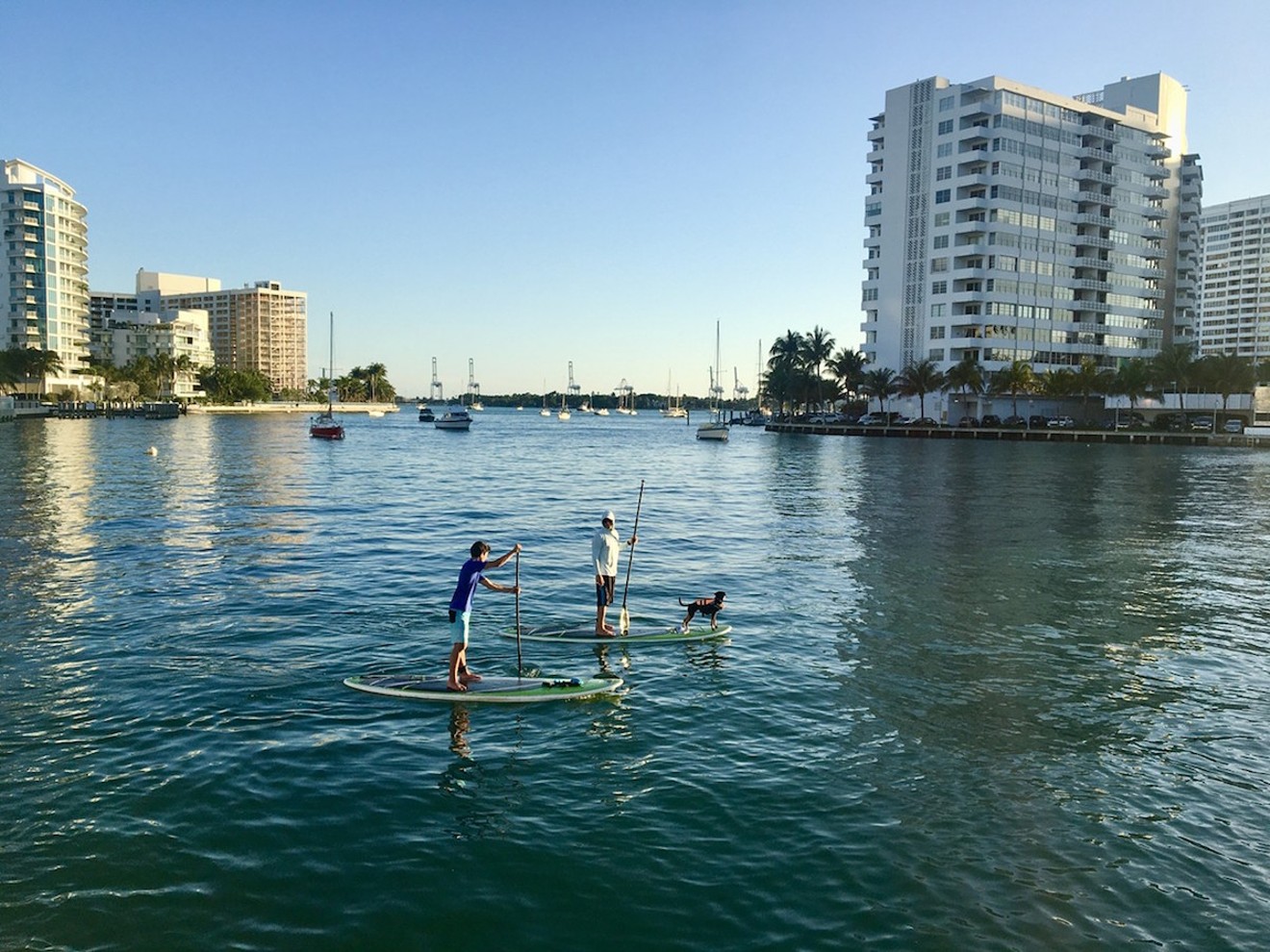 A "No Contact With Water" advisory was issued after the City of Miami Beach reported two sewage breaks last week. Photo by Julienne Gage
During the first week of February, two wastewater pipes ruptured in Miami Beach, spilling sewage into waterways that feed into Biscayne Bay. Certain parts of the city remain under a "No Contact With Water" advisory, which recommends "not swimming or engaging in recreational water activity."

But what does that mean for the seagrass, coral, fish, manatees, and other marine wildlife that can't avoid the bay?

Rachel Silverstein, executive director of the environmental nonprofit Miami Waterkeeper, explains that sewage leaks, in particular, have higher amounts of nitrogen and phosphorous — nutrients that prompt algal blooms that block necessary sunlight to the sea floor and cause fish and seagrass to die off. Nitrogen and phosphorous have also been found to undermine corals' ability to fight infection.

"The bay is truly at its limit for pollution," Silverstein tells New Times. "If you lose the seagrass, you lose all the fish and wildlife who rely on it for food and habitat, including manatees, and you end up with a situation like in Indian River, where manatees are starving."

Last Tuesday, the city reported an underwater sewage pipe had burst near the Venetian Causeway and Maurice Gibbs Park. Whenever there is a "potential of contaminating a water source," Miami Beach spokesperson Melissa Berthier tells New Times, the city immediately issues a "No Contact With Water" advisory.

In order to lift the advisory, Berthier explains, the city must report two consecutive days of clean water samples, specifically testing for fecal coliform and enterococcus, an indicator of the presence of excreta in water.

"However, as we were preparing to lift the advisory from the first break, we experienced that second break," she notes.

The second break, reported on Friday, occurred near Dade Boulevard and Bay Road in a pressurized sewage pipe called a force main, which moves wastewater from low-lying areas to higher elevations for treatment. That led the city to extend its "No Contact With Water" advisory to include the Collins Canal and the waterways surrounding Sunset Islands.

"Fortunately, both breaks have not exceeded water quality standards for fecal coliform and enterococci when tested," Berthier notes.

On Monday, the advisory was lifted for the area near the Venetian Causeway and Maurice Gibbs Park, but it remained in effect at the Collins Canal and the waterways surrounding Sunset Islands.

"We are awaiting laboratory results from Monday, February 7, and anticipate receiving them Wednesday, February 9," Berthier says. "We are hoping for continued clean results, which would allow us to lift the advisory in all locations."

Last October, Miami Beach City Manager Alina Hudak wrote a letter to commissioners informing them that the pressurized sewage pipe on Dade Boulevard had suffered multiple ruptures since 2019. A month earlier, she told commissioners the same pipe had ruptured for the third time in only 30 days.

But the pandemic has complicated the city's ability to replace the aging infrastructure.

"While the emergency procurement is being expedited, the global shortage of raw material is creating significant lead times," Hudak told commissioners at the time. "It is expected that the emergency project will commence in the first quarter of 2022."

Berthier tells New Times that construction to replace the aging pipes won't begin until May of this year at the absolute earliest.

Old sewage pipes, leaking septic tanks, and other aging wastewater infrastructure around Miami-Dade County have been deteriorating and polluting Biscayne Bay with harmful nutrients for years. Sea-level rise is only making it worse.

The county is under a 15-year consent decree to rebuild and rehabilitate $1.6 billion worth of new infrastructure in three local wastewater treatment plants.

Parts of downtown Miami and Miami Beach seem especially susceptible to sewage pipe breaks, which over the years have dumped hundreds of thousands of gallons of wastewater into the bay.

In 2020, rotting, dead fish filled Biscayne Bay after low oxygen levels in the water effectively drowned the underwater creatures. Miami Waterkeeper's Silverstein explains that the northern portion of the bay is especially vulnerable because the island of Miami Beach partially blocks polluted water from flowing and diluting into the ocean.