Crandon Park Photo by Chris Garcia / Greater Miami Convention and Visitors Bureau
With Environmental Protection Agency Director Scott Pruitt at the helm, the Trump administration has proposed cutting federal programs that monitor contaminant and fecal-mater levels in the Atlantic Ocean, keep tabs on phosphorous and mercury in the Everglades and Florida Keys, and clean up leaking underground tanks. Florida has the nation's highest number of leaking, corroded storage tanks that leach carcinogens like benzene into the soil.

In short: The Trump EPA budget would decimate areas like Miami-Dade County, where millions of people rely on clean air, water, and soil to prop up the tourism and real-estate industries. A report released today by the nonprofit Environmental Defense Fund (EDF) lays bare exactly how the Trump/Pruitt EPA plans to severely damage South Florida. There is everything from cutting programs that monitor ocean toxins to making it harder to clean up toxic Superfund sites. The results don't look promising.

"Hollowing out the EPA would be a disaster for Florida’s health and tourist economy," the EDF's vice president of  U.S. climate and political affairs, Elizabeth B. Thompson, writes in the report. "Millions of Floridians could be at risk of exposure to dangerous or even toxic pollution in the air they breath and the water they drink. And the state’s beaches would be more vulnerable to contamination. Cleanup of toxic Superfund sites and some of the nation’s most polluted air could languish. Millions of dollars in hazardous waste cleanup costs could be shifted from polluters to taxpayers."

One of Donald Trump's central campaign promises was to hollow out the U.S. regulatory state, especially the EPA. On the campaign trail, Trump pitched crippling or even abolishing the EPA in order to fight the evil scientists pushing climate-change conspiracies. But climate change proved an easy distraction from the fact that cutting the EPA is a massive gift to some of the nation's largest companies, from mountaintop coal miners to sugar farmers to car manufacturers and power companies.

In May, Trump unveiled his proposed 2018 fiscal budget, which included reductions to every single federal program that funds climate-change research, as well as cutting the EPA's regulatory budget by 40 percent. Thankfully, presidential budgets are simply a request made to Congress — the plan will hardly look the same after the U.S. House and Senate toss rocks at it. But with the GOP controlling every arm of government, it's almost certain that huge cuts to the EPA are in the offing.

The EDF outlined which Florida-specific programs Trump and budget director Mick Mulvaney proposed cutting earlier this year: Among those Trump wants to eliminate are the BEACH Act grant program, which helps communities monitor pollution and human waste in the ocean; the National Estuary Program, which protects areas including Florida's Tampa Bay, Sarasota Bay, and Indian River Lagoon; and the South Florida Geographic Initiative, which prevents harmful chemicals from flowing into the Everglades. 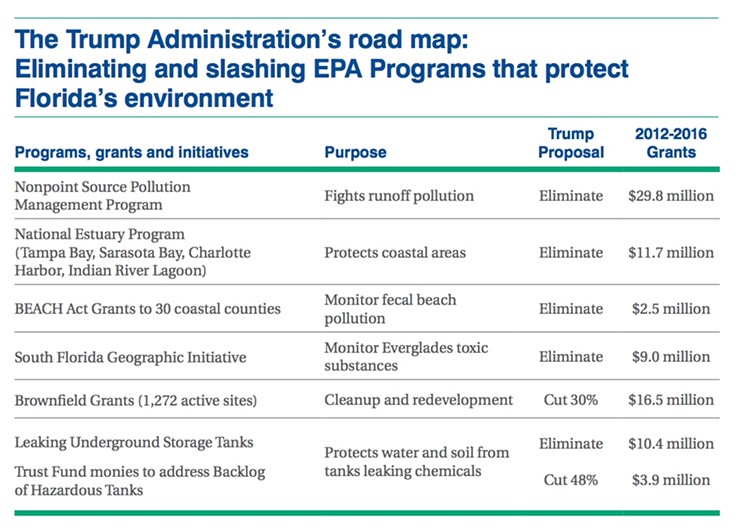 Environmental Defense Fund
The EDF warned cuts to the BEACH Act program could hurt Miamians, and residents of color in particular.

"In addition to threatening health and recreation, these cuts would also damage one of the pillars of Florida’s tourist economy by increasing and lengthening the number of public health beach closures," the report warns. "That means fewer tourists and hotel guests, less fishing and boating, and more uncertainty in the business climate. Miami-Dade County residents, two-thirds of whom are Latino, do more than $7.3 billion of business related to the Atlantic Ocean, at nearly 3,000 businesses employing more than 76,000 people, according to the National Ocean Economics Program."

Swimmers are already regularly shut out of areas of the Miami-Dade coastline thanks to huge floating blooms of poop in the ocean: Miami Beach's North Shore was briefly shut down August 9 due to a wave of human waste in the water.

Trump also wants to cut the nation's Superfund cleanup programs, Brownfield grants that protect public health (Florida has received $16.5 million in Brownfield grants since 2012), and the "Leaking Underground Storage Tank" trust fund. (Florida has the nation's highest number of leaking underground tanks — 10,745.) The EDF warns that cuts to each of these programs will disproportionately affect communities of color, which are often situated on or near polluted sites.

The report also lays into the Trump administration for trying to cut one area-specific program: the South Florida Geographic Initiative. For the past 25 years, the program has helped local communities remove leaking septic tanks and toxic cesspits, which create runoff that flows into the Everglades. The report also warns that the same runoff can also flow south into the Florida Keys National Marine Sanctuary.

"The Initiative’s data was key to a 2012 court settlement that provided $880 million to protect the Everglades from encroaching pollution," the report warns. "John Garder, the National Parks Conservation Association’s director of budget and appropriations, called the proposed cuts to the Initiative’s clean-water efforts 'nothing short of alarming.'"

The same can be said for the Trump administration's entire budget proposal.