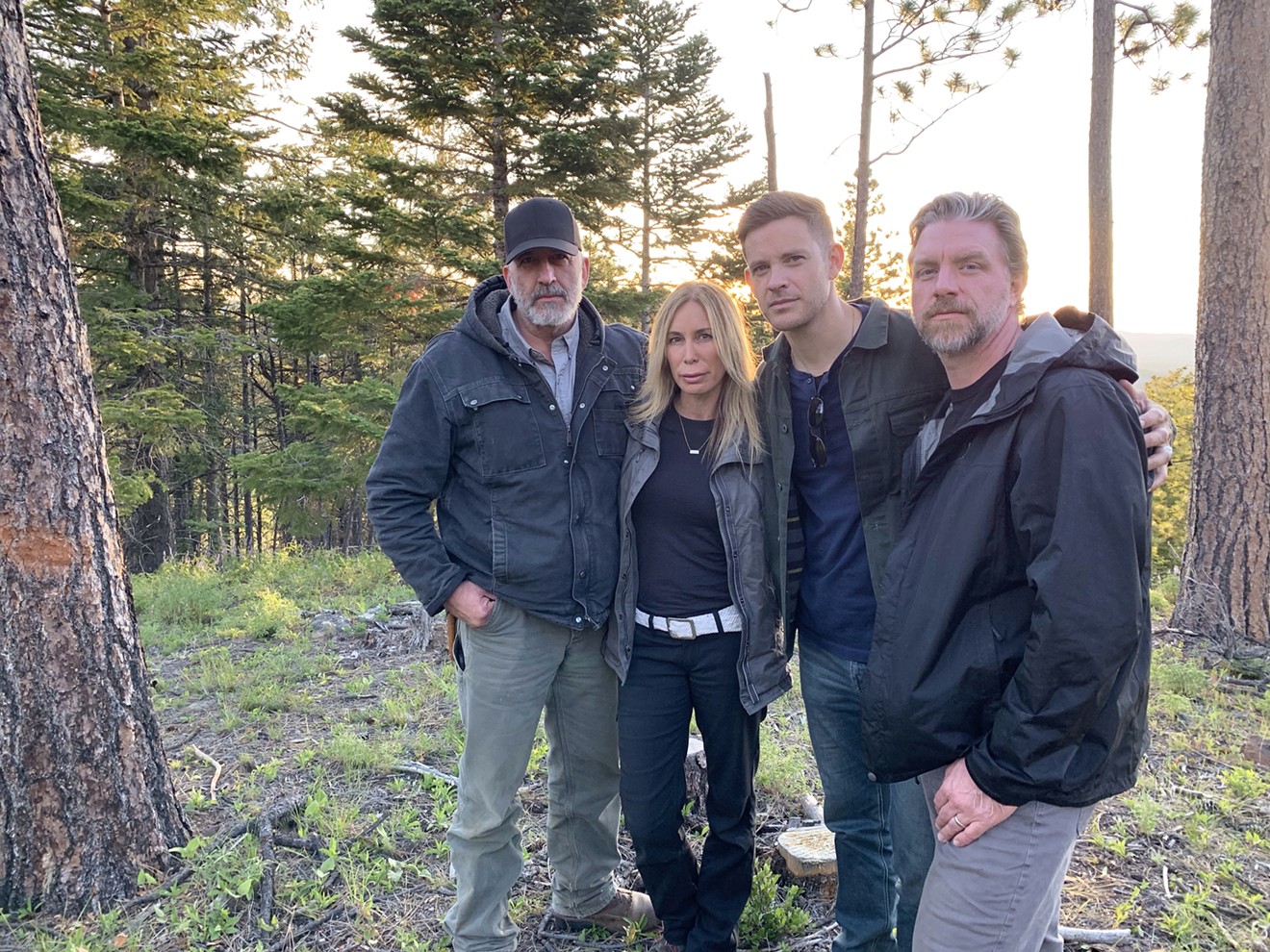 The Expedition Bigfoot team: Russell Acord (left), Mireya Mayor, Bryce Johnson, and Ronny LeBlanc Photo courtesy of Travel Channel
After hearing the enduring urban legend of Bigfoot, thousands of adventurers have tried to track down the mysterious creature, which many people claim lurks in the Pacific Northwest. Despite more than 10,000 reported sightings in the United States, none has resulted in definitive evidence of a real Bigfoot.

However, a team of researchers using advanced data algorithms and modern-day technology claims to have found video evidence confirming the existence of a Bigfoot-like beast.

"Throughout my career, several Bigfoot researchers had approached me about questions they have about prints they found, but I felt this was an opportunity to conduct a proper scientific investigation into the subject matter of Bigfoot," says Mayor, a National Geographic correspondent and the director of Florida International University's Exploration and Science Communications Initiative. "For me, it was a very natural fit. What I liked very much about the premise of this expedition is that it would be a team of experts with very different skill sets and backgrounds working together in one particular hot spot. It was a unique opportunity and approach to find Bigfoot that I have never seen before."


Old legend meets modern-day technology in the all-new series, Expedition Bigfoot. Follow our team as they attempt to prove once and for all that Bigfoot is real.

Mayor — who has been dubbed the "female Indiana Jones" and is credited with co-discovering the world's smallest primate, the mouse lemur — never foresaw becoming a TV correspondent after receiving her bachelor's degree in anthropology and English at the University of Miami and her PhD from Stony Brook University in New York.

"My career path has been anything but linear. I was a cheerleader for the Miami Dolphins when I was an undergrad at the University of Miami and fell in love with the subject of primates," Mayor tells New Times. "I set off to the most remote regions of the world in South America to find little-known primates and then to Madcasgar to again search for primates that I actually was told I would never find. I became a wildlife correspondent because I was out there doing these expeditions, not the other way around."

Over the course of her two-decade career searching for elusive creatures, Mayor describes herself as "an open-minded or curious skeptic" and lets the evidence lead the way.

"I saw things out there that if I hadn't seen with my own two eyes, I really wouldn't believe it. We captured things on video that really has changed my perspective on this subject," she says. "My view of this now, given the video footage that Russell captured out there, is that this animal on this video is nothing that we know of out there: It was upright, walking seemingly bipedal, so to me that says there is something out there that is a large ape-like thing living far from its home."

Although it was a fascinating and grueling expedition, Mayor hopes the series removes the stigma about sharing stories of seeing unusual creatures.

"Throughout the series, different eyewitnesses are viewed, all of whom give incredibly compelling and consistent accounts of what they have seen," Mayor tells New Times. "What really captured me about these witnesses is that they had so much to lose and very little to gain by telling these stories, and they were still brave enough to tell them. So I'm hoping the stigma is removed and people are able to come forward to tell their stories, because that can only help in future scientific investigations."

Mayor says some of her colleagues in the scientific community reached out to show their support for the expedition, while others likely shook their heads in disbelief.

"The positive responses have been overwhelming, and I'm sure there will be people that are still very skeptical," she says. "More people than not are fascinated by the subject or have had their own experiences that they didn't share up until that point when they knew I was involved in this project."

In the end, Mayor expects viewers to be surprised by the compelling evidence the team found. Expedition Bigfoot will air Sunday, December 8, at 10 p.m. on the Travel Channel.
KEEP MIAMI NEW TIMES FREE... Since we started Miami New Times, it has been defined as the free, independent voice of Miami, and we'd like to keep it that way. With local media under siege, it's more important than ever for us to rally support behind funding our local journalism. You can help by participating in our "I Support" program, allowing us to keep offering readers access to our incisive coverage of local news, food and culture with no paywalls.
Make a one-time donation today for as little as $1.

Naomi Feinstein is a contributor for Miami New Times. She is a rising senior at the University of Miami, where she is double-majoring in journalism and political science. She is also the managing editor of the UM student newspaper, the Miami Hurricane.
Contact: Naomi Feinstein
Follow:
Twitter: @naomifeinstein