Who Was Griselda Blanco, the Miami Drug Queen Profiled in Lifetime's Cocaine Godmother? 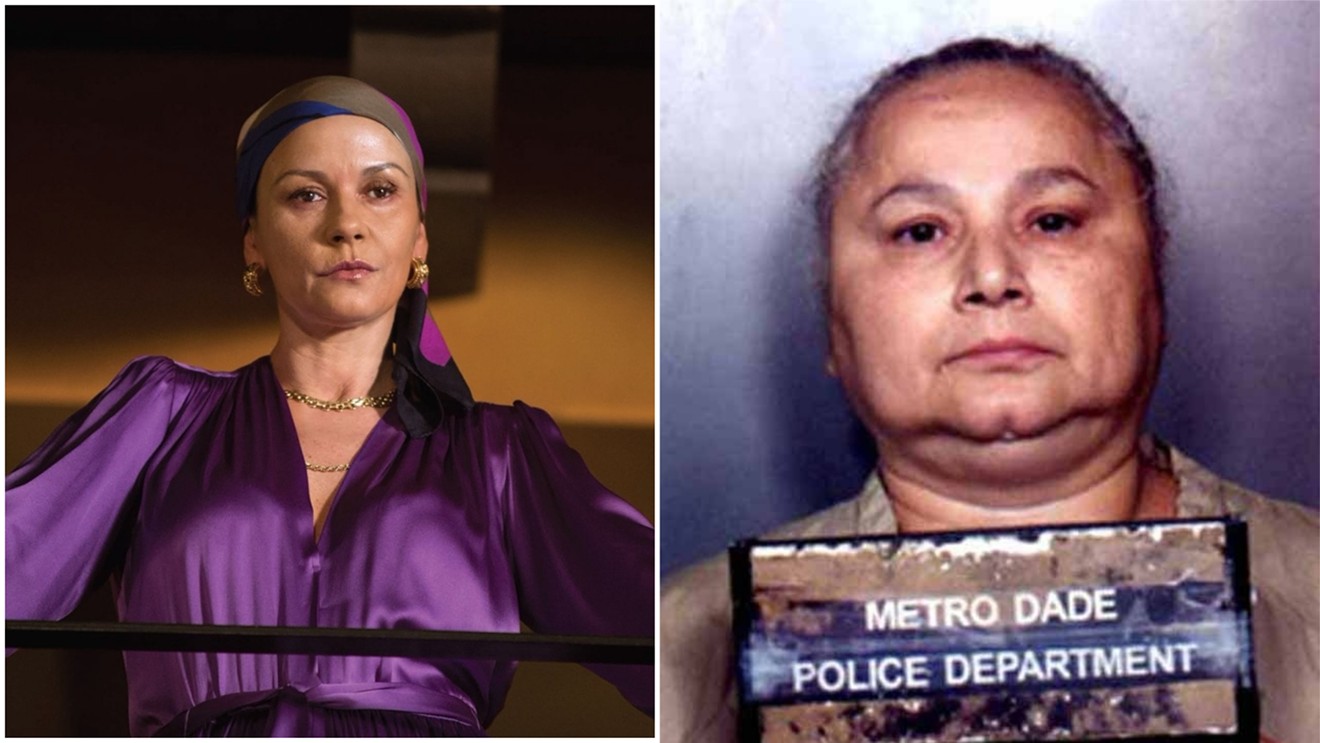 Courtesy of Lifetime / Metro Dade Police Department
There's a reason Quavo from Migos name-dropped Miami cocaine-queen Griselda Blanco on Drake's 2017 hit "Portland." Merely invoking her name during Miami's long ago, drug-hazed heyday terrified a certain sort of Magic City resident. So when the TV channel Lifetime announced that Catherine Zeta-Jones would portray Blanco in a 2018 biopic called Cocaine Godmother, it seemed Miamians finally get an honest look at one of the most vicious drug kingpins in city history.

Premiering tonight, we get the campy, machete-filled Cocaine Godmother, which will explain who Blanco actually was and why multiple feature films have now been devoted to her exploits. Zeta-Jones said she was inspired to play the role after watching Billy Corben and Alfred Spellman's infamous Cocaine Cowboys documentary. A sequel, Cocaine Cowboys II: Hustlin' With the Godmother, focuses solely on Blanco.

Since New Times has chronicled Blanco's life for decades now, allow us to explain:

1. Blanco is, ultimately, most famous for being a bloodthirsty monster.

Let's cut to the chase: People care about Griselda Blanco because she slung dope and hacked her enemies to bits. If you crossed her, she'd kill you. If you messed with her children, she'd have her goons torture you and laugh maniacally as your bones cracked and skin peeled back. Most people believe several factors caused gher viciousness. Firstly, she grew up in an abusive environment. And secondly, she laid the violence on thick to convince the male criminal kingpins around her that she was not to be messed with. It worked.

A few examples of Blanco's insanity and/or penchant for violence: She went by both la Madrina (the Godmother) and "the Black Widow," due to her penchant for murdering her own husbands. She was accused of masterminding at least 40 murders between Miami and New York, including the killing of a two-year-old boy in a drive-by shooting at SW 168th Street and South Dixie Highway. According to the testimony of federal informant Max Mermelstein, Blanco boasted that she was proud to have killed the kid because it upset the father.

2. She was born in Colombia, gave birth to four sons in Queens, and then moved to Miami to escape an abusive husband and federal drug charges.

According to Cocaine Cowboys II, Blanco was a dirt-poor kid in Colombia who committed her first murder at age 11 and later worked as a teenage prostitute. Blanco famously loved the Godfather films, to the point that she named one of her kids "Michael Corleone." Those who got close to her later in life, such as Cocaine Cowboys II's central character, Charles Cosby, described Blanco as a nurturing, caring woman to those who were close to her — so long as they remained loyal. Cosby recounted that when he cheated on Blanco, she sent assassins to scare him by firing "warning shots" that just missed killing him. Two of Blanco's children were later shot dead while she served prison time. In 1975, while living with her second husband, Alberto Bravo, in Queens, she was indicted on federal drug conspiracy charges. But she fled to Colombia and later resettled in Miami.

3. She imported and sold cocaine for Pablo Escobar's Medellín cartel and became the most powerful, and feared, drug lord in Miami.

At her peak, Blanco was running a billion-dollar drug-smuggling empire. She was known for inventing new, custom-designed underwear with secret pockets to stash drugs. She was allegedly importing $80 million in drugs per month — but ultimately killed so many people and made so many enemies that she was forced to flee the city in 1984.

4. She was arrested in 1985 and would likely have been given the death penalty if not for local corruption.

Federal agents caught up to her in California, infamously busting into Blanco's home as she laid calmly in bed. She was convicted the next year but remained an influential figure while in prison. In 1994, local prosecutors in Miami-Dade County attempted to charge her with three murders, but the case unraveled after employees in the Miami-Dade County State Attorney's Office were caught having phone sex with the prosecution's central witness, Jorge "Rivi" Ayala.

5. She was ultimately assassinated in a Medellín butcher shop in 2012.

According to the newspaper El Colombiano, a gray-haired, 69-year-old Blanco had been hanging out in an open-air Medellín butcher shop for roughly 30 minutes when two masked men rode up on a motorcycle. One man got off and pumped two bullets into her head, killing her on the spot. As the newspaper noted, motorcycle assassinations were Blanco's own favored method of killing people; whoever committed the crime likely wanted to send her off with a final shot of irony.