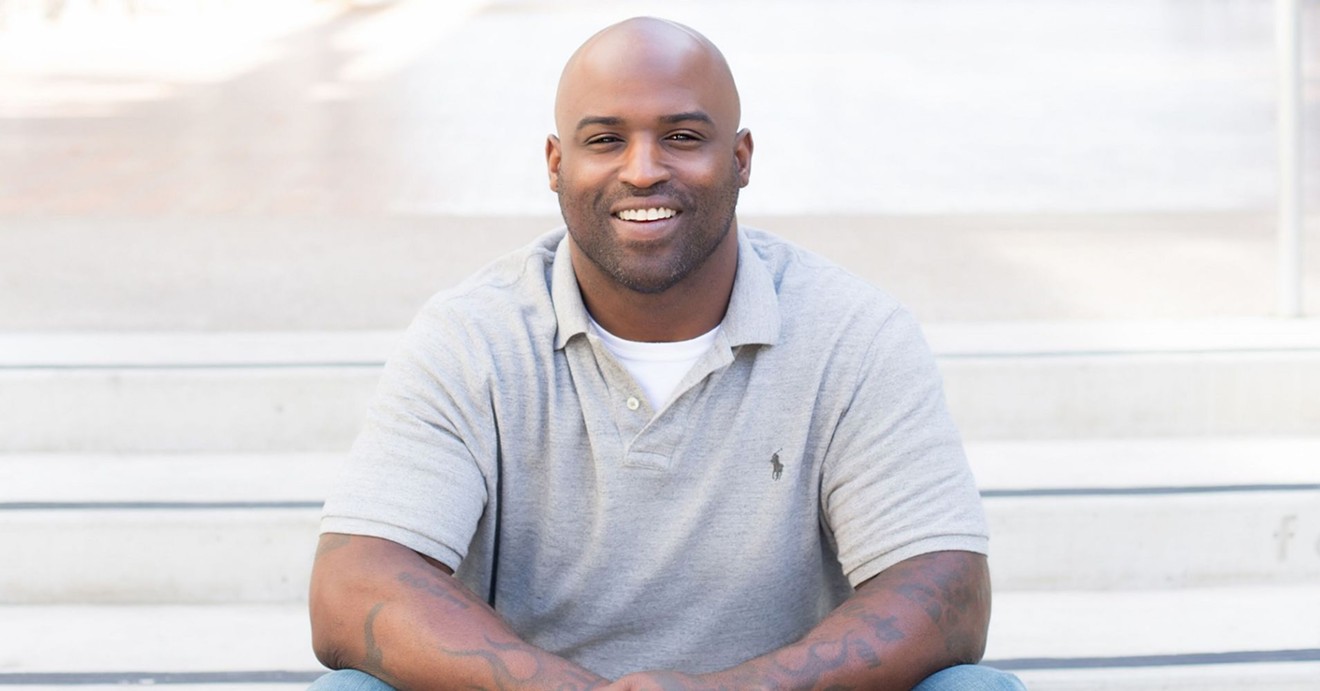 Ricky Williams doesn't have to hide his love for cannabis anymore. Real Wellness
Ricky Williams was the poster child for the National Football League’s long-running Reefer Madness approach to dealing with players who smoke marijuana. Labeled a slacker by sports pundits appalled that a star player of his caliber would walk away from the game so he could puff a joint or two or three, he became known as the Jeff Spicoli of pro running backs, a stoner like the Sean Penn character in Fast Times at Ridgemont High.

This past weekend, Williams admitted as much while hawking a new line of CBD products in front of two dozen people at 360 Spaces, a co-working spot in Miami’s Little River neighborhood. “Back in 2004, I retired to smoke weed,” Williams said. “Well, that’s not all the way true. I retired to take better care of myself. One of those things that helped was cannabis.”

Two years ago, the former Heisman Trophy winner revealed that he likely lost around $10 million in salary and potential endorsement deals because of his marijuana use. The Miami Dolphins  is still getting over Williams’ decision to leave in his prime. The San Diego native had violated the NFL’s substance abuse policy for the third time when he began a pot-fueled journey of self-discovery.

Williams has always maintained he turned to marijuana to self-medicate for depression and social anxiety disorder, not to mention to help dull the pain from football's daily beatings. “When I was with the Dolphins, the team doctor would tell me, ‘Take it easy in practice,’” Williams recalls. “I knew full well I couldn’t... so I had to go on my own and find ways to better take care of myself.”

Williams returned to the Dolphins for the 2005 season, but not before serving a four-game suspension and forfeiting an additional four games of pay for sparking up spliffs (which are now legal recreationally in 10 states; Washington, D.C.; and all of Canada). Yet Williams proved the most productive pothead to ever play in the NFL. He ran for 743 yards and six touchdowns playing as a backup to rookie Ronnie Brown.

Williams failed another drug test prior to the 2006 season. This time the NFL dropped the hammer, suspending him for a year. His return in 2007 was cut short by an injury to his right shoulder in his first game back. But the following year he rushed for 659 yards on 160 carries and scored four touchdowns while helping the Dolphins to an 11-5 record and a rare playoff appearance.

In 2009, Williams was a beast. Brown went down with a season-ending injury and Ricky rushed for 1,121 yards and averaged 4.7 yards a carry. In 2010, Williams' final season with the Dolphins, he racked up 673 yards and two touchdowns while once again backing up Brown. Williams retired a year later after a brief stint with the Baltimore Ravens.

This weekend, Williams was back in Miami promoting his new career in — what else? — the emerging legal marijuana industry. Williams’ cannabis company, Real Wellness, partnered with Miami-based company CBDoobie to launch a line of nonpsychoactive joints that serve as herbal remedies for people who don’t want to get high. The event was produced by Creative Glue marketing agency.

Cannabidiol, or CBD, is one of the fastest-growing products in America. It's one of at least 113 cannabinoids identified in hemp plants that provide medicinal effects similar to those of marijuana — but without THC, the active ingredient that makes people ponder their existence in the vast universe while munching on a Doritos Loco combo from Taco Bell.

Williams' foray into took root when a former teammate, Kyle Turley, invited him to speak at a cannabis conference about his marijuana use. “At first, I was like, 'No,' because I was trying to get deals and rejoin society,” Williams recalled. “I hung up the phone, thought about it, and realized everybody knows I smoke anyway. I called Kyle back and told him I would speak. It was the first time I was in front of a couple of hundred people and told my story honestly. Something I had been shamed for in the past came full circle.”

Williams began speaking at other conferences and meeting cannabis vendors from across the country who are making products in states where marijuana has been legalized for medicinal and recreational use. Some encouraged him to start his own venture. “The first thing that came to my mind was making medicine,” Williams says. “We started Real Wellness in March. I took all my lessons from alternative healing and Chinese medicine and combined it with cannabis.”

In California, where Real Wellness is based and where pot is legal, the company makes products with THC. However, the partnership with CBDoobie allows Williams to sell legally across the country. Cannabidiol made from industrial hemp is legal to purchase and consume in any state.

“Now I have a good excuse to come back to South Florida,” Williams said. “If I did have one regret, it's that I didn’t finish my career here as a Dolphin. I get to do one of those things where I sign for a day and retire a Dolphin.”

Williams, by the way, has a twin sister, Cassandra, who played minor league baseball, is a certified yoga instructor, and was recently reported to be enrolled in a doctoral program in Oriental medicine. He is married to his business partner, Linnea Miron

Williams deserves to be on the Ring of Honor at Hard Rock Stadium next to other Dolphins greats like Dan Marino, Mark Duper, and Jason Taylor.\

Correction: Due to an editing error, an early version of this story misstated the name of Williams' present wife.
KEEP MIAMI NEW TIMES FREE... Since we started Miami New Times, it has been defined as the free, independent voice of Miami, and we'd like to keep it that way. With local media under siege, it's more important than ever for us to rally support behind funding our local journalism. You can help by participating in our "I Support" program, allowing us to keep offering readers access to our incisive coverage of local news, food and culture with no paywalls.
Make a one-time donation today for as little as $1.