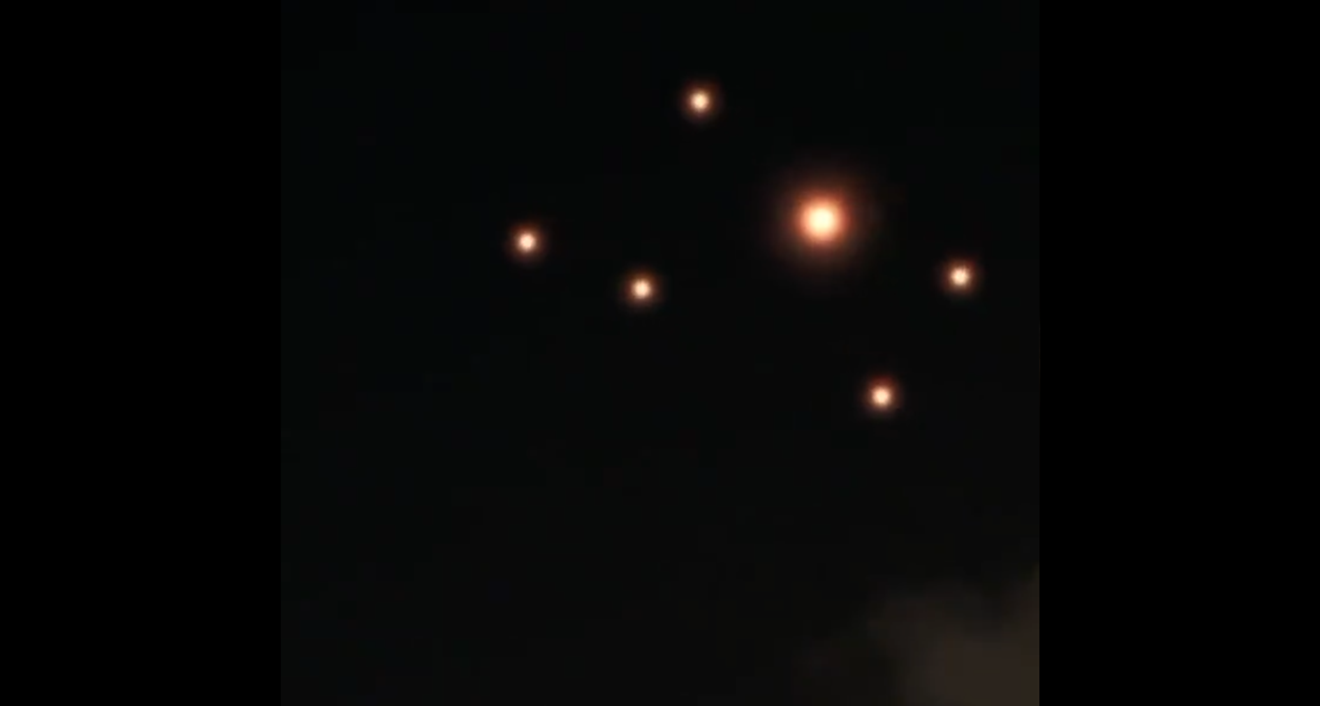 "Um what?!?" he tweeted. "This video is from a friend in Miami. Can anyone explain?"

The videos showed a triangular formation of six mysterious lights hovering over the downtown Miami skyline.

"What the fuck is that?" the narrator said in one of the videos. "Holy shit."

The orbs fanned out in the night sky, and then, one by one, they seemed to hurtle into space.


This is video #2 from the same friend in Miami pic.twitter.com/tQZanVKgf8

The videos, which drew more than 3 million views, 41,000 likes, and 22,000 retweets, also attracted some media attention. Whoopi Goldberg discussed them on the ABC talk show The View. In a year of wildfires, murder hornets, locust swarms, endless presidential shenanigans, and a global pandemic, a UFO sighting didn't seem that far-fetched.

As such, some Twitter commenters joked about adding an alien invasion to their 2020 bingo cards. But several people argued that the videos were poorly edited and fake. Some pointed out that smartphone apps can be used to overlay orbs on videos.

A History Channel program has now come to the same conclusion.

The show, called The Proof Is Out There, featured the Miami UFO video during its series premiere earlier this month. Host Tony Harris, a former CNN and Al Jazeera America news anchor, said the footage is reminiscent of a phenomenon known as the Hessdalen lights, unexplained orbs that have appeared over a small valley in Norway for more than a century.

Witnesses to the phenomenon have described seeing massive balls or helices of light that hover for hours, flash blue and white, or zip across the sky. Scientists theorize that the lights could be caused by ionized gases in the atmosphere, ball lightning, or a natural underground "battery."

But Harris pointed out that the lights in the Miami video are "more orderly." He said the lights look like UFOs flying in formation.

On the show, Harris asked Michael Primeau, a forensic video analyst, and Marc D'Antonio, a photo and video analyst for the nonprofit Mutual UFO Network, to weigh in on the footage.

Primeau focused on the narrator's reaction to the lights.

"When we investigate these types of recordings, we detect that there is a human reaction time where the brain needs to essentially catch up," Primeau said on the TV show. "And in this particular case, we don't see any kind of reaction time to an unnatural phenomenon such as this. It's almost as if the operator knows exactly what's gonna happen, when it's gonna happen. He's reacting almost perfectly. There is no reaction time."

D'Antonio provided a more technical analysis of the video. He studied the footage frame by frame and noticed that the lights and the clouds don't move in concert.

"The object, frame by frame, is changing position, while the clouds are more gently moving in one direction," he said.

D'Antonio claimed that's evidence of bad motion tracking, which he explained as "a process by which you put fake things into real footage to make it look real." A few social-media commenters said the lights were likely edited using Adobe After Effects. One Twitter user even broke down how the person behind the camera may have done it.

D'Antonio and Harris also questioned how a cluster of UFOs could have appeared over Miami without others witnessing it. According to Harris, the person who made the video declined an interview request.

Ultimately, the host deemed the video a hoax.
KEEP MIAMI NEW TIMES FREE... Since we started Miami New Times, it has been defined as the free, independent voice of Miami, and we'd like to keep it that way. With local media under siege, it's more important than ever for us to rally support behind funding our local journalism. You can help by participating in our "I Support" program, allowing us to keep offering readers access to our incisive coverage of local news, food and culture with no paywalls.
Make a one-time donation today for as little as $1.