Looking for God After Surfside Collapse

Scott Ritter traveled 200 miles from his home in Englewood, Florida, to lend a hand at the site of the Surfside building collapse. Photo by Joshua Ceballos
In the parking lot of the Stella Maris House apartments in Surfside, staring at a wall of well-wishes and blessings, Scott Ritter was angry.

He had driven 200 miles to Miami from his home in Englewood, Florida, to volunteer his help in search and rescue efforts at the site of the Champlain Towers South condo collapse, though he learned once he arrived that volunteers weren't being accepted.

So instead, Ritter placed a signed card on a chainlink fence that served as one of several makeshift memorials for the victims of the collapse. Below his card was a handwritten poster that read "SURFSIDE God Is With You" with a cross drawn on it. Looking at the poster, Ritter couldn't help but feel frustrated.

"'God is with you' is a nice thing to say, but right now it's just too easy to say something like that," he said.


A Christian himself, Ritter said he doesn't mean to be a cynic, but it's hard to think of his faith or think of God in the face of a tragedy that claimed the lives of dozens of residents, including children and grandchildren, without warning.

If God was with Surfside, how could God have allowed something like this to happen? Ritter asked.

"I think God should've been around before this accident occurred and got things fixed before it fell," he said.

Questions of faith are prevalent during times of hardship and disaster, when religious communities grapple with questions of how a benevolent god could exact such a toll on the undeserving.

For Surfside, the toll has been heavy, not just with the collapse, but with the myriad struggles the world has experienced over the past 18 months, says the Rev. Barbara Asinger of the Church by the Sea, a Protestant congregation in neighboring Bal Harbour.

Asinger's church has about 500 members from in and around Surfside. Many of them have been beat down by COVID-19 and news of the collapse, she says, and some have considered leaving town altogether.


"A lot of people coming out of the pandemic are having a crisis of faith. They held on tighter during the pandemic, and now all the other feelings of frustration, disappointment, and hopelessness are really penetrating a lot of people," Asinger tells New Times. "People feel like they’re just giving up. People in our congregation are tired. Really tired."

Questions of God's part in this tragedy and others have not been uncommon for Asinger.

Rabbi Yossi Harlig of the Chabad of Kendall and Pinecrest, a volunteer Miami-Dade Police chaplain, has been on-site in Surfside since the day of the fall on Thursday, June 24. He received a call at 5 a.m. asking all chaplains to head to the scene of the collapse and arrived Thursday morning. Since then, he's been there to counsel first responders and family members of victims while they come to grips with the impact of the tragedy as hopes waned that more survivors would be found.

"There was devastated screaming, all those emotions.... One of the most important things for any person, not just a chaplain or rabbi or spiritual leader, is to be there for people in every stage of life, and especially in times of crisis," Harlig says.

Four days after the building fell, Harlig says, he made the decision to bring family members to the site of the rubble.

Some cried. Some screamed. Some wanted to be left alone, while others needed to be held.

In the face of tragedy like this, it's not Harlig's place to offer platitudes or to preach about God's role.

"It's not about giving sermons. People don't want to hear that," he says. "The pain is too great, it's too deep. If they ask me that question, 'Where is God?' I'll just give them a big hug."

Asinger too says that it's hard to evangelize when there's such pervasive hopelessness, in a community where faiths are shaken and so few answers are readily available.

To date, the remains of 94 people have been recovered from the rubble of Champlain Towers South. Work shifted from search and rescue to search and recovery last Thursday, as first responders from around the nation reached two weeks on the site and hope of finding anyone alive approached zero.

Being angry at your god, questioning them, asking how they could allow such a catastrophe to happen — these things are important to the healing process, Asinger says, and faith leaders must allow these questions and nurture them in their communities.

"In grief you can get angry. You want answers. And sometimes we don't like the answers," she goes on. "When media goes away and people move on, someone is still grieving, and it's our job to be there for them and listen. It's our job to remind people that hope is always present, it's just hard to see it."

But in the darkest times, even when many question how a loving god could allow a building to fall in the middle of the night and take so many lives, both Asinger and Harlig say there is hope to be found in the people who come in to show their love, support, and faith in times of tragedy.

"I believe my god weeps when something happens and there is a time of crisis. You can see that in the outpouring of love in our community," Asinger says. 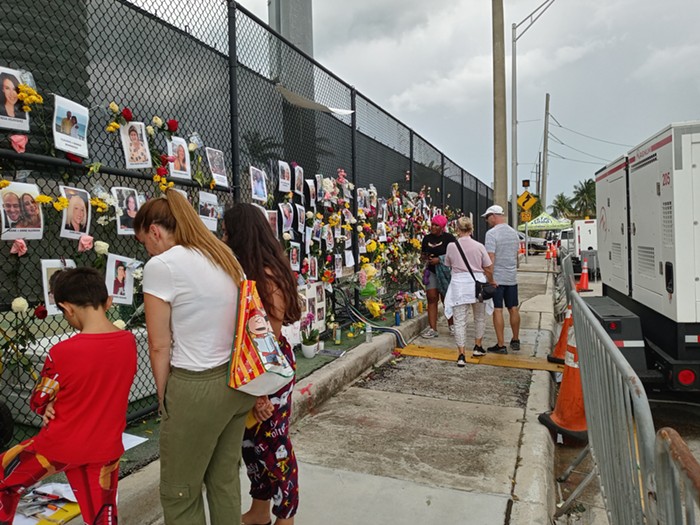 Visitors and residents of Surfside pay their respects to those lost in the Champlain Towers South Collapse at a memorial wall on Monday, June 28.
Photo by Joshua Ceballos
On a rainy Monday afternoon after the collapse, while crews were still searching for survivors in the rubble, Christina Neptune cried as she prayed over photos of those lost in Champlain Towers. Though she wasn't connected to anyone in the building, she felt the call to travel to Surfside from her home in Hallandale Beach each day and pray for the victims and their families, and to offer some comfort to those who were having trouble holding themselves together.

Neptune has also questioned where God could be in this catastrophe, and what, if any, reason there could be for something like this to happen.

"You know, you always hear that phrase: ‘Things happen for a reason.' I’m like: 'I need a reason behind this,'" she says.

Still, the pain in the community brought her out to give in any way that she could — through prayer, company, or a listening ear.

Like Neptune, many have come to Surfside in the past several weeks to offer whatever they can to survivors, families, residents, and first responders.

Local restaurants have donated food and drinks to rescue workers. A donation table at the Starbucks on Harding Avenue in Surfside quickly overflowed with cases of water, snacks, nonperishable food, and pillows. A mere two weeks after the collapse, a charitable fund set up to donate money to victims' families and support recovery work had raised nearly $2 million.

It may be impossible at this time to see how a benevolent force could have any part in this calamity that will likely rock Miami for years to come, but perhaps there is some spark of benevolence and divinity in the aftermath, when the going got tough and the community got going. 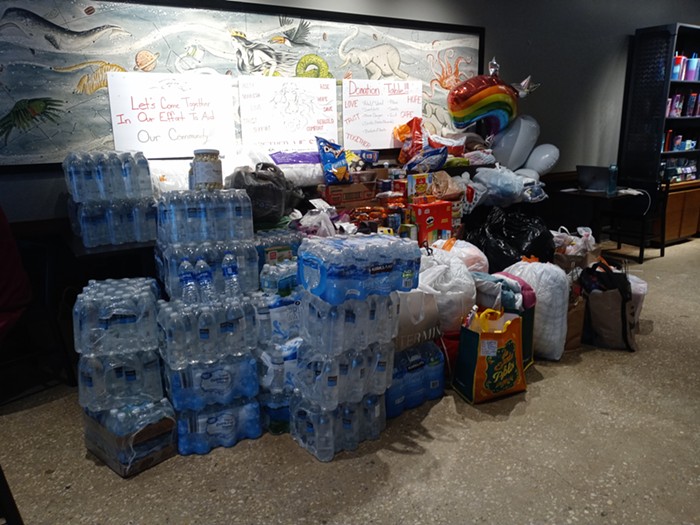 The donation table at a Surfside Starbucks set up for rescue workers and survivors quickly filled to overflowing with charitable gifts from the community.
Photo by Joshua Ceballos
"God wants each of us to make the world a better place, and every single person that got involved here is there for the same mission," Harlig says. "We have no control if a building is gonna come down. But we have power over what happens once it's down."
KEEP MIAMI NEW TIMES FREE... Since we started Miami New Times, it has been defined as the free, independent voice of Miami, and we'd like to keep it that way. With local media under siege, it's more important than ever for us to rally support behind funding our local journalism. You can help by participating in our "I Support" program, allowing us to keep offering readers access to our incisive coverage of local news, food and culture with no paywalls.
Make a one-time donation today for as little as $1.