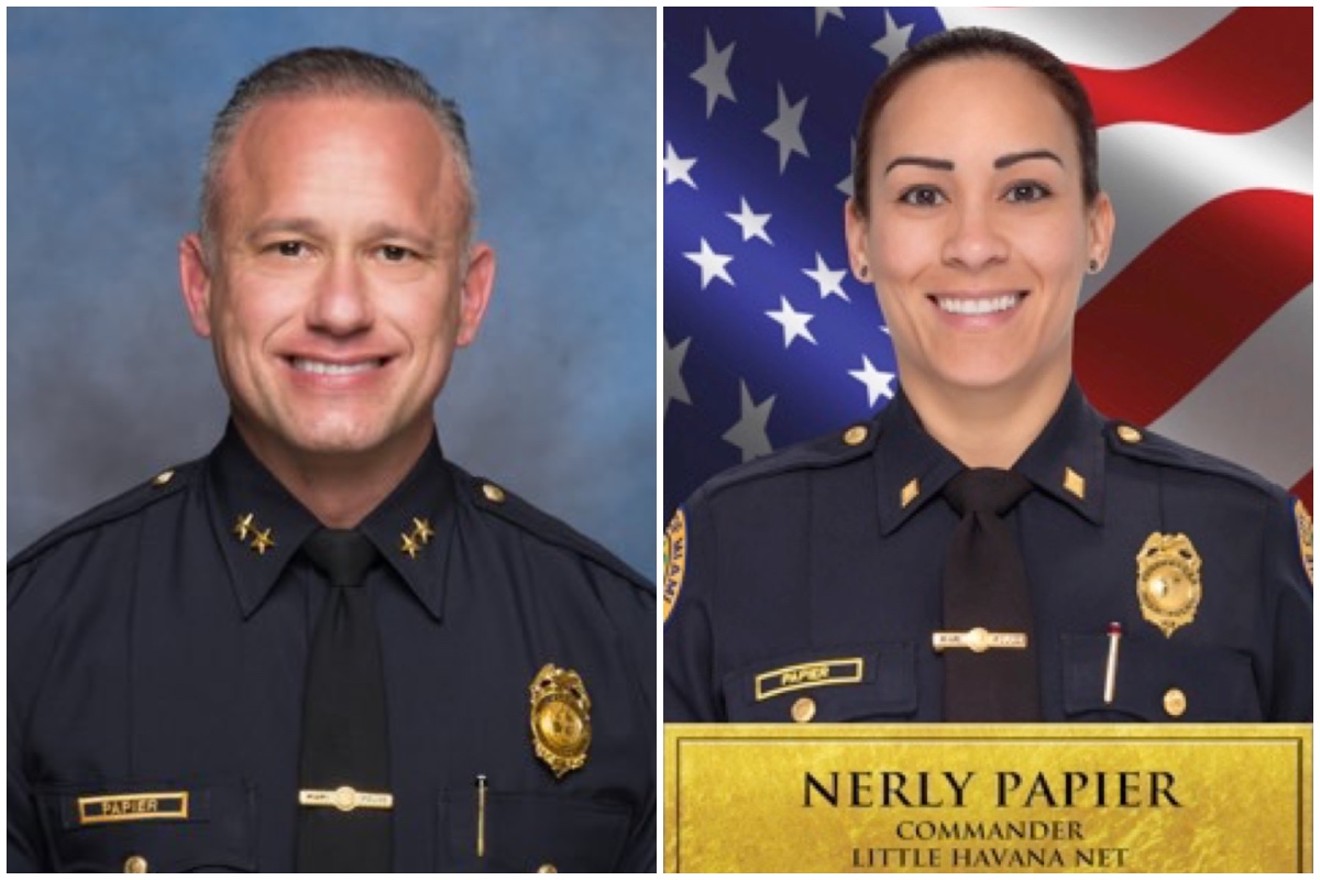 Deputy Chief Ronald Papier (left) and Cmdr. Nerly Papier (right). Photos via Twitter/MPD
Two of Miami's highest-ranking police officers, a veritable police power couple, have been suspended amid an investigation into allegations of corruption and an internal cover-up.

The MPD would not say what led to the suspensions, citing an ongoing investigation, but the disciplinary action comes three weeks after an anonymous source sent an email to several city officials alleging corruption on the part of the Papiers and several other high-ranking officers.

The April 4 email, which was addressed to Suarez, alleged that Nerly Papier was driving "under the influence of control substances" and crashed a police vehicle into a curb "at approximately 40 miles an hour" on April 2, blowing out both tires on one side.

The email alleged that Nerly Papier drove the vehicle on its rims to MPD headquarters before calling her husband, the deputy chief.

"Any reasonable person would have knowledge that after striking a curb at a high speed, with two blown tires and cracked rims, the vehicle would be unsafe to drive. You would definitely feel the instability in the steering wheel as well as loud sounds coming from the rims grinding against the public road as well as loud sound and vibrations from the blown out tires," the email stated.

According to the email, Ronald Papier then contacted MPD Capt. Javier Ortiz to have the vehicle towed and repaired under the false pretenses that it had been vandalized. A police sergeant allegedly wrote a report on the crash without inspecting the vehicle or taking photographs, and the report was purportedly signed off on by a police major without proper review.

New Times was not able to independently verify any of those details. But a crash report obtained via public-records request shows that Nerly Papier was involved in a crash on the morning of April 2 blocks away from MPD headquarters at 400 NW Second Ave.

The report says she was driving a white 2020 Ford Explorer when she swerved to avoid another vehicle and hit a curb, puncturing both tires on the right side and damaging the vehicle's rims. The report states that Nerly Papier was not tested for alcohol or drug use, saying none was suspected. (A copy of the crash report is embedded at the end of this article.)

According to the report, the crash occurred at 9 a.m., but it wasn't reported until 1:45 p.m. The report says the SUV was towed to the City of Miami motor pool at 1390 NW 20th St., but a photo obtained by New Times shows a white MPD Ford Explorer with two punctured right tires in the police headquarters parking lot, about two miles away, on the day of the crash. The email from "Bill Schahwartzman" alleges that the vehicle was towed to the motor pool after Nerly Paper drove it to police headquarters. 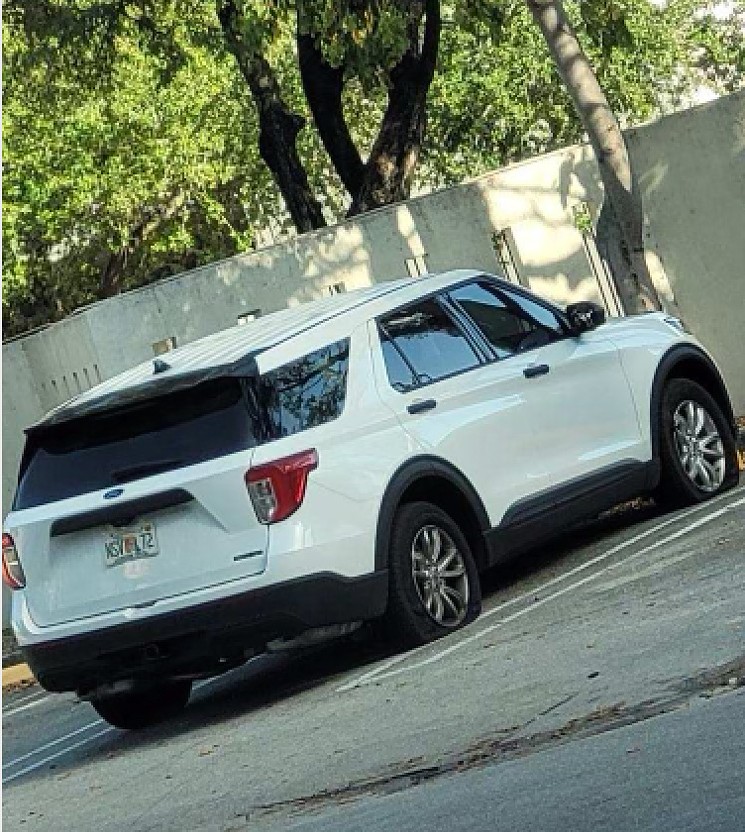 A white MPD Ford Explorer is seen in the Miami Police Department parking lot with two punctured right tires, on the same day Cmdr. Nerly Papier crashed a police SUV only blocks from headquarters.
Courtesy photo
In an interview with New Times earlier this month, Chief Acevedo said that all allegations mentioned in the complaint email were being investigated by the police department's Internal Affairs (IA) division.

"Everything that's alleged will be investigated," Acevedo told New Times. "Whatever allegations are, they're being taken seriously."

Acevedo also said at the time that IA investigators would now be reporting directly to him. Previously, the major for IA reported to Ronald Papier, who would relay information to the chief.

Acevedo said it was already his plan to make that change before the allegations emerged against the Papiers.

"I want IA directly under me. That was already my plan. No one comes into IA unless I approve them and vet their disciplinary history and employment history," he said. "In the past, from what I've heard, cases have been allowed to expire. There's no excuse for that."

Nerly Papier may have violated police rules by not reporting the crash immediately. MPD's departmental orders — the procedural guidebook for Miami police — state that when a member of the department is involved in a crash, they must report it immediately to a supervisor and write up a report of the incident. According to the April 2 crash report, Nerly Papier's crash wasn't reported until nearly five hours after it occurred.

The rules also require that the crash be thoroughly investigated by an impartial employee.

It's unclear if the Papiers were relieved of duty based on the investigation into the crash and the alleged impropriety, or if the discipline arose out of some other investigation.

Ronald Papier was previously acting as interim chief of police for the MPD after the previous chief, Jorge Colina, retired earlier this year. Ronald Papier was one of eight finalists to replace Colina as chief during an interview process this January.

The City of Miami administration surprised many when it hired Acevedo, a chief from Houston, Texas, who was not among the candidates who'd been publicly interviewed or announced.

Since joining the MPD this April, Acevedo has said he intends to address concerns about corrupt officers and has plans to fire ten or more problematic cops.