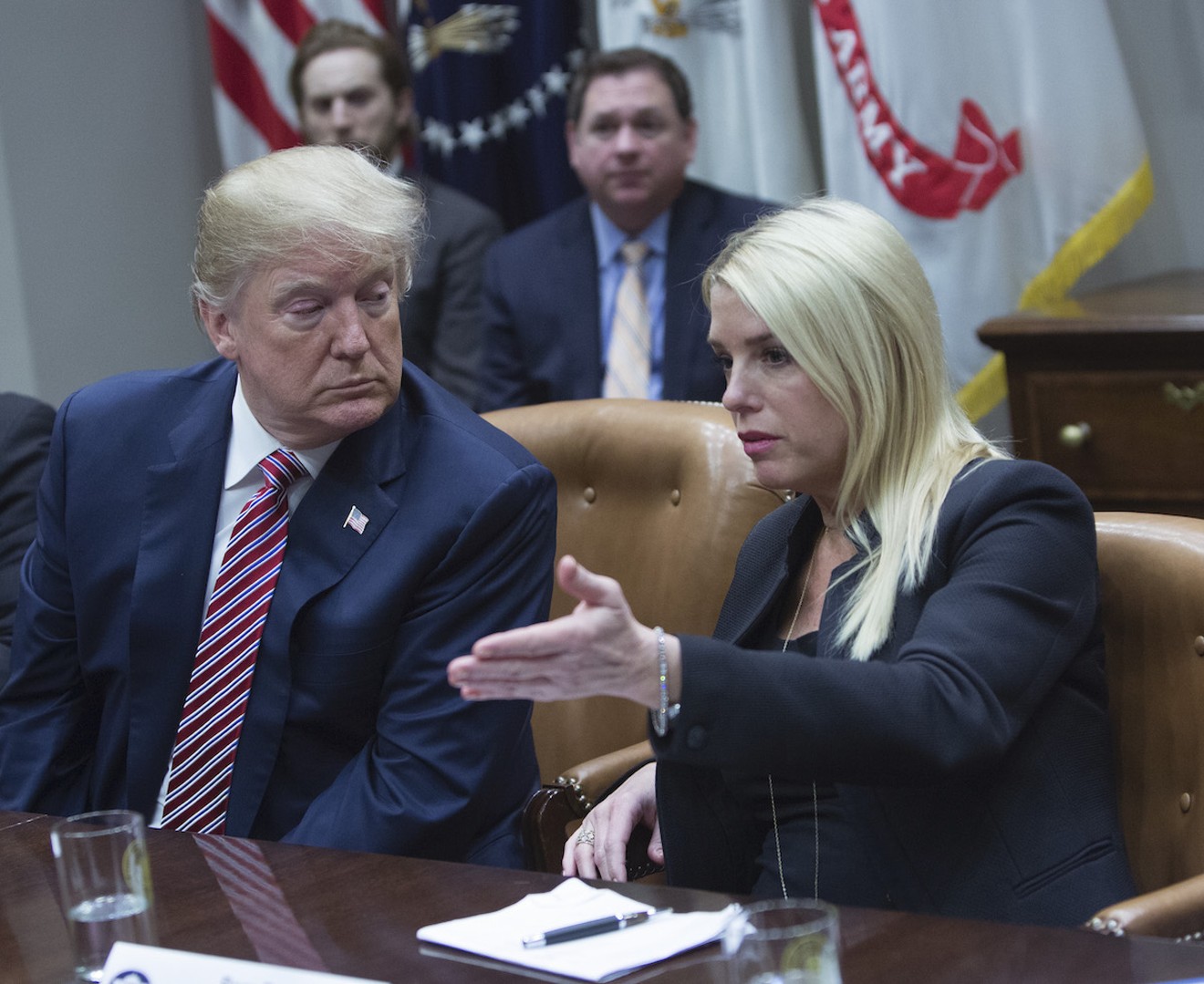 Today's announcement that Pam Bondi will join the Trump White House has ethics watchdogs furious. Photo by Chris Kleponis-Pool / Getty
In 2013, then-Florida Attorney General Pam Bondi announced she wouldn't bring criminal or civil charges against Trump University, the online for-profit so-called college Donald Trump founded that did not actually offer university courses and was long accused of being a scam designed to defraud vulnerable people looking to get ahead. Bondi made that decision immediately after the Trump Foundation donated $25,000 toward her reelection bid.

Now Trump is putting Bondi in the White House. The Wall Street Journal this afternoon reported the president is hiring two new staff members to assist with public relations and legal strategies to stave off his possible impeachment. One of those two people is supposedly Bondi.

Trump has had a consistent and borderline weird alliance with Bondi, Florida's first female attorney general, for a number of years. She was an early supporter of Trump's 2016 campaign and frequently spoke on his behalf. Perhaps most notable, she gave a pro-Trump speech on live TV during the 2016 Republican National Convention in which she led a series of "Lock her up!" chants directed at Trump's then-opponent, Hillary Clinton. After leaving office earlier this year due to term limits, Bondi joined Ballard Partners, an ultrapowerful lobbying firm with a foothold in D.C. and Florida that brags about its closeness to the Trump family. She's also a frequent guest on Fox News.

Thus, today's news isn't entirely stunning, especially because Trump himself said in 2018 that he "would consider Pam Bondi for anything" and that he'd "love to have her in the administration." It has long seemed a matter of when, not if, he would hire her, but outstanding questions about her actions regarding Trump University have seemingly kept her sidelined until now.

As a team of New York Times investigative reporters recounted during Trump's first presidential campaign, the Florida Attorney General's Office had received 23 complaints about Trump University before Bondi had taken the job and yet another complaint afterward. She never opened an investigation into any of the allegations.

In the meantime, the New York State Attorney General's Office brought its own lawsuit against Trump University in 2013. The state alleged Trump used illegal marketing tactics and promised nonexistent benefits to people who signed up for the weeklong so-called business courses Trump had been offering. On September 13, 2013, the Orlando Sentinel published a report stating Bondi's office was debating joining New York's case.

But in 2016, the Times revealed that four days before the Sentinel story was published, the now-closed Trump Foundation gave the pro-Bondi political action committee And Justice for All a $25,000 check. Bondi received the check four days after the Sentinel story and, conveniently, then announced she wasn't joining the Trump case after all.

Today's announcement has ethics watchdogs furious. The nonprofit Citizens for Responsibility and Ethics in Washington (CREW) this afternoon posted a long Twitter thread outlining the numerous shady ways in which Bondi, Trump, and his now-shuttered foundation have intersected over the years.


Trump is adding Pam Bondi to his impeachment defense team, which is interesting, considering when she was reportedly investigating him, he gave an illegal $25K political donation supporting her. Her office never went after his business. It's story time. 1/ https://t.co/CWyl2YNErP

CREW, for example, noted that in 2016, the foundation and other news reporters uncovered that the Trump Foundation's Bondi donation all but certainly constituted illegal self-dealing to benefit Trump himself and that the foundation paid penalties for breaking IRS rules when it funneled cash to Bondi:


CREW filed another IRS complaint against Trump & the Foundation for the donation. The complaint called for an investigation into whether the donation was used to provide a private benefit to Trump and into Trump for engaging in prohibited self-dealing. 14/ https://t.co/s3nHNQpv3b

Per the Wall Street Journal, the White House has not yet formally announced Bondi's new job, but the former Florida attorney general is expected to join the president's team just before the first round of public impeachment inquiry hearings begins in Washington next week.
KEEP MIAMI NEW TIMES FREE... Since we started Miami New Times, it has been defined as the free, independent voice of Miami, and we'd like to keep it that way. With local media under siege, it's more important than ever for us to rally support behind funding our local journalism. You can help by participating in our "I Support" program, allowing us to keep offering readers access to our incisive coverage of local news, food and culture with no paywalls.
Make a one-time donation today for as little as $1.