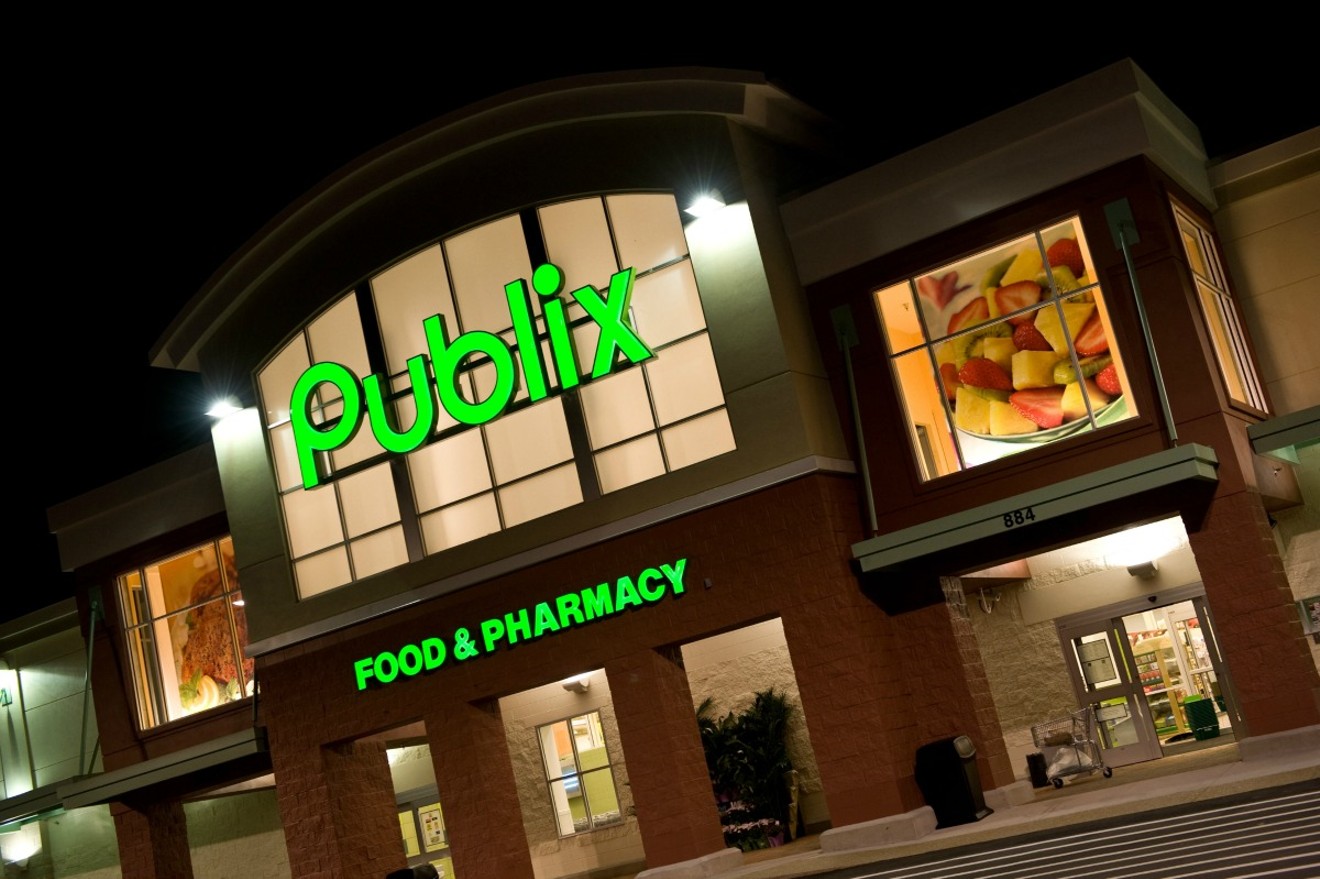 Behind the scenes, Publix has faced waves of criticism. Photo by Josh Hallett / Flickr
Once again, money tied to Publix Supermarkets' founding family is propping up a hard-line conservative campaign. In 2016, Carol Jenkins Barnett, daughter of chain founder George Jenkins, sent an $800,000 donation to an anti-medical-marijuana group. In 2017, Jenkins' heirs funneled money to then-gubernatorial candidate and self-admitted "proud NRA sellout" Adam Putnam. Earlier this year, other members of the family donated wads of cash to Donald Trump's reelection campaign.

Now at least one entity tied to the Lakeland-based family has begun bankrolling Florida Gov. Ron DeSantis, a Trump ally. According to state records, the Julia J. Fancelli Living Trust — named for Jenkins' daughter Julia Jenkins Fancelli — donated $25,000 to the political action committee Friends of Ron DeSantis this past October 30.

Records show the trust has made only three other state-level contributions: two donations totaling $33,000 to conservative attorney general candidate Ashley Moody in 2018 and $30,000 to Friends of Ron DeSantis in October 2018, just before DeSantis won his general election against Democrat Andrew Gillum.

In light of the Jenkins family's political history, it's entirely on-brand that the Fancelli Trust has been propping up DeSantis. Earlier this year, New Times reported that Fancelli and her children had dumped maximum federal donations into Trump's reelection campaign and sent thousands of dollars to the Trump Victory PAC.

Publix remains one of the best-loved companies in Florida. The supermarket chain is employee-owned, heavily pushes its family-friendly message in ads, and often shares stories about its founder. But behind the scenes, the company has faced waves of criticism from farmworker groups, the LGBTQ community, and gun-safety advocates. After the Parkland shooting, the company temporarily suspended all political donations after survivor David Hogg held a series of "die-ins" in Publix parking lots to protest the fact that the company's leaders had donated $670,000 to Putnam's campaign.

Though Publix has said the Fancellis are not directly involved in day-to-day operations anymore, the family has clearly benefited financially from the supermarket giant. Earlier this year, New Times noted Publix regularly bought supplies from Alma Foods, a company Julia Jenkins Fancelli once owned. As far back as 1996, the Sun Sentinel reported that Publix had been funneling as much as $1.7 million to Alma Foods annually. Securities and Exchange Commission records show Publix was buying products from Alma until April 2017, when Fancelli left the company.
KEEP MIAMI NEW TIMES FREE... Since we started Miami New Times, it has been defined as the free, independent voice of Miami, and we'd like to keep it that way. With local media under siege, it's more important than ever for us to rally support behind funding our local journalism. You can help by participating in our "I Support" program, allowing us to keep offering readers access to our incisive coverage of local news, food and culture with no paywalls.
Make a one-time donation today for as little as $1.