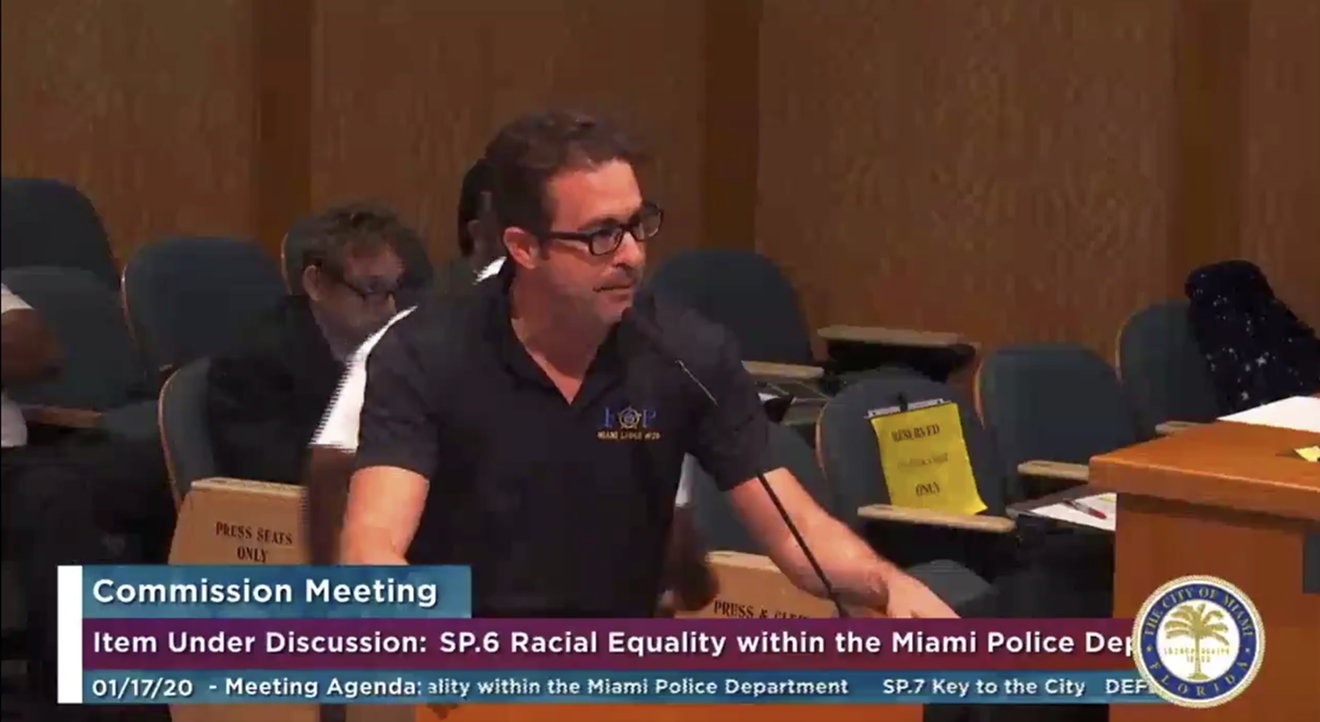 Miami Police Capt. Javier Ortiz Screenshot via City of Miami TV
Miami Police Department Capt. Javier Ortiz — the problematic former head of the police union — was never investigated by Internal Affairs after he falsely claimed on two promotional exams and to city commissioners that he was a Black man. The MPD says the white Hispanic cop never broke departmental policy.

In December 2019, Sgt. Stanley Jean-Poix — who is president of the Black officers' union, the Miami Community Police Benevolent Association — filed a complaint against Ortiz, claiming Ortiz had falsified his race in 2014 and 2017 when applying for promotions to the ranks of lieutenant and captain. Jean-Poix unearthed documents showing that on the two promotional applications, Ortiz said he was "Black (non-Hispanic)."

After the complaint was lodged, Ortiz spoke before the Miami City Commission this past January and said he was a "Black male, or a Negro" under the "one-drop rule" — a dated and racist principle implying that anyone with the slightest bit of African ancestry should be considered Black.

Both Ortiz's application to the MPD and his firearms license identify him as white Hispanic. An MPD roster from January 2019 provided to New Times also lists Ortiz as a Hispanic male.

Jean-Poix believes Ortiz lied about his race to get a leg up on the promotional exams because MPD was under a federal consent decree to hire and promote more minority officers.

But new documents provided to New Times show that Internal Affairs never actually investigated Ortiz for lying, and the case was closed without further action. A report written on June 11 and signed off on by MPD leadership on September 23 shows that Jean-Poix's complaint was received and filed away as informational.

"The complaints state that Captain Javier Ortiz falsified his race and ethnicity (Black or African American/Non-Hispanic) on the 2015 Lieutenant Exam (October 15, 2014) & 2017 Captain Exam (February 13, 2017) as to gain an advantage," the report states. "This case will be filed as Information Only."

Jean-Poix received the informational report after inquiring about the status of his complaint last month. He calls IA's indifference "a slap in the face."

"I'm really disappointed," Jean-Poix says. "Javier Ortiz boldly lied and said he was a Black male. When I see this information report, I'm like, 'What? Are you serious?'"

MPD spokesperson Kenia Fallat tells New Times that IA did not investigate the complaint because the alleged behavior did not violate departmental policy.

Jean-Poix begs to differ. He claimed in his initial complaint that Ortiz was in violation of City of Miami civil service rule 17, which prohibits civil employees from making false statements in regard to any test, certification, or promotion.

"That's ludicrous," says Jean-Poix. "That doesn't even make any sense. Why would we even put race or ethnicity on the test if we can just switch it up whenever we want?"

Ortiz, the ex-president of the Miami Fraternal Order of Police (FOP), has been suspended with pay since January after Chief Jorge Colina said he was under investigation by an outside law enforcement agency.

Yet IA cases against Ortiz have been known to go nowhere, and the captain has been able to avoid major repercussions despite racking up 42 citizen complaints and 18 use-of-force incidents in 16 years at the MPD, according to the Civilian Investigative Panel, an independent police oversight board.

Although Ortiz no longer has a leadership role in Miami's police union, he recently made headlines for criticizing the current FOP president, Tommy Reyes, for a new proposed contract with the city.
KEEP MIAMI NEW TIMES FREE... Since we started Miami New Times, it has been defined as the free, independent voice of Miami, and we'd like to keep it that way. With local media under siege, it's more important than ever for us to rally support behind funding our local journalism. You can help by participating in our "I Support" program, allowing us to keep offering readers access to our incisive coverage of local news, food and culture with no paywalls.
Make a one-time donation today for as little as $1.