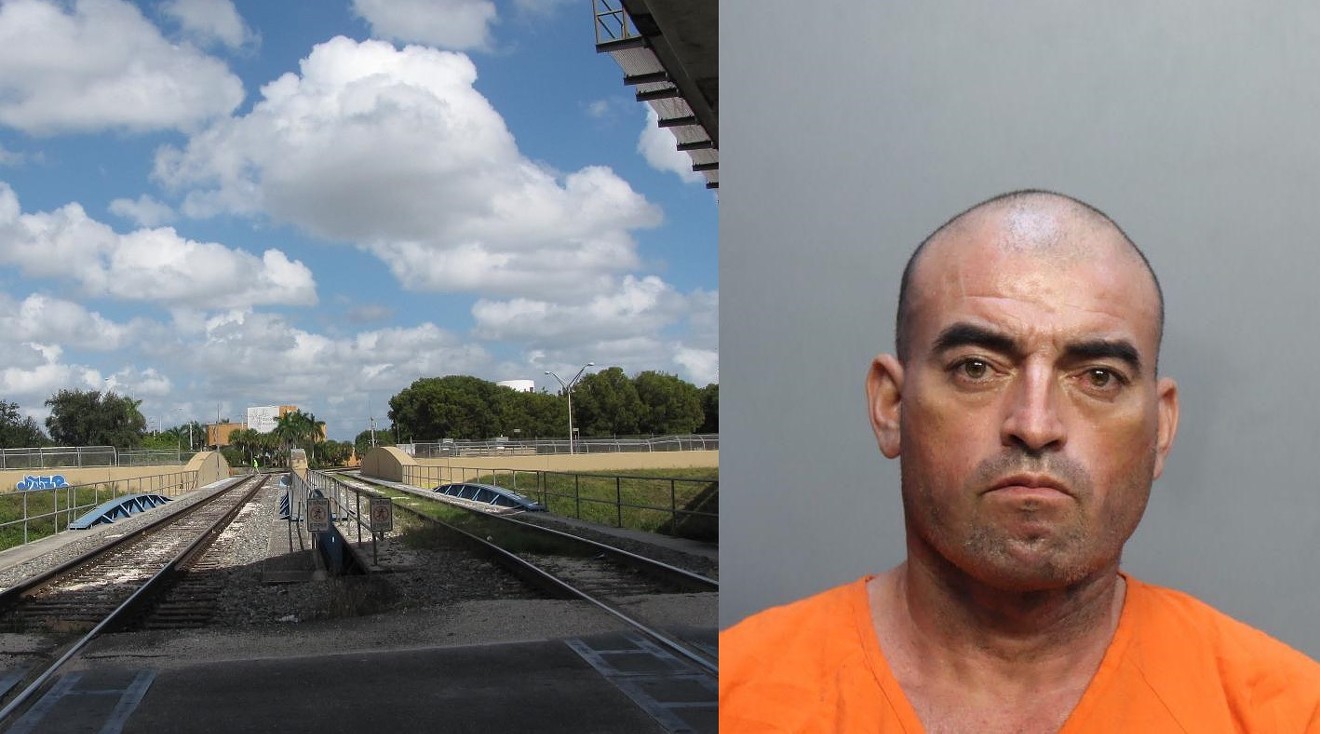 Roberto Hercules was charged with attempted murder after his alleged naked machete attack on a bicyclist. Photo (left) by Theo Karantsalis
A naked, machete-wielding man with painted nails and a cowboy hat slashed a bicyclist and fractured her skull near Miami Springs, according to Miami-Dade Police.

Roberto Hercules, 45, was arrested on an attempted murder charge on October 14, three days after the attack, in the 2100 block of West 10 Court, in Hialeah. Police found him sleeping nude next to two cowboy hats in a tent "hiding within trees," a Miami-Dade Police report states.

The female victim was riding her bicycle at 6:30 a.m., on October 11, along South River Drive in Medley when Hercules asked whether she had a crack pipe, the report states.

"When the victim said that she did not have a pipe, the defendant [Hercules] pulled out a machete and began to attack," police allege.

After striking her multiple times with the machete, Hercules fled on foot, according to the report. Miami Springs police posted a community alert on Instagram.

The victim was transported to a hospital intensive care unit where she was treated for a fractured skull, bleeding in the brain, a broken left arm, and a large laceration on the left hand, the arrest report says.

The knife allegedly used by Hercules was "found in the vicinity," a Miami Springs police report states. There was "information that the victim came from the homeless camp along the FEC railroad," according to the report.

Hercules, a native of El Salvador, has also been charged with armed robbery and aggravated battery with great bodily harm, according to county court records. He is being held without bond at the county's Turner Guilford Knight Correctional Center, where he also has an immigration hold.

The tracks that divide Medley and Miami Springs, where South River Drive and North Royal Poinciana Boulevard connect, is a popular — albeit illegal — cut-through path for students and commuters who use the Metrorail station at 2005 W. Okeechobee Rd.

Locals have found rotting fruit, pennies, and chicken and goat parts presumably offered as ritual Santeria sacrifices, scattered about the tracks. The area sits across from Triangle Park, a popular Miami Springs picnic area where people park to watch alligators or use the Ludlum Drive fitness trail.

New Times reported last year that a homeless encampment at the same site was set ablaze after a standoff with authorities. Last Friday, burgeoning camps underneath the railroad bridge were abruptly cleared out.
KEEP MIAMI NEW TIMES FREE... Since we started Miami New Times, it has been defined as the free, independent voice of Miami, and we'd like to keep it that way. With local media under siege, it's more important than ever for us to rally support behind funding our local journalism. You can help by participating in our "I Support" program, allowing us to keep offering readers access to our incisive coverage of local news, food and culture with no paywalls.
Make a one-time donation today for as little as $1.