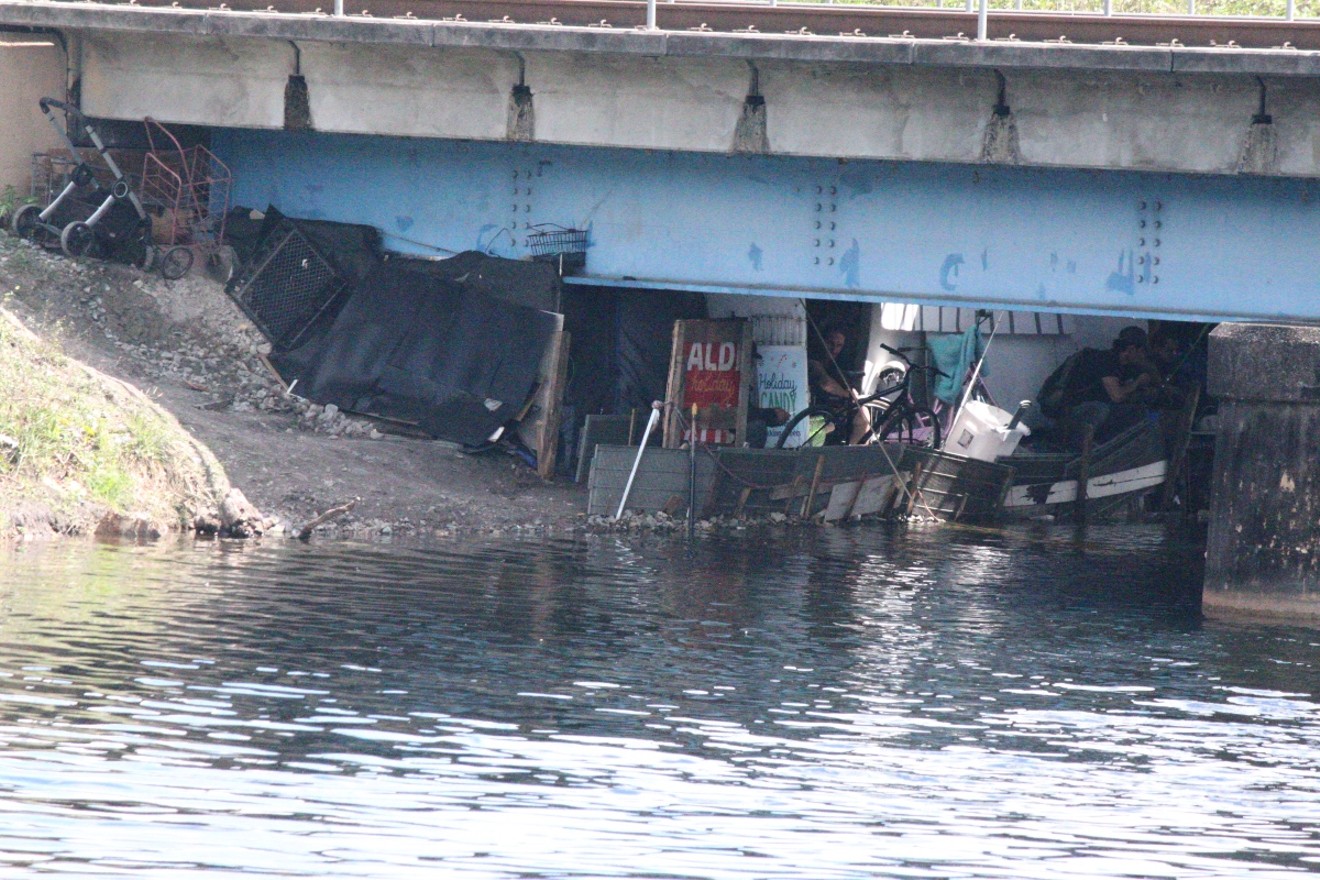 The encampment was home to about two dozen residents. Photo by Theo Karantsalis
A group of homeless people living under a railroad bridge in Hialeah apparently set their encampment on fire during a standoff with authorities in recent weeks after a clean-up crew was dispatched to clear out the site.

In a geographic conundrum, the encampment at West 12th Avenue and Okeechobee Road bordered Miami Springs, Medley, Hialeah, and unincorporated Miami-Dade County, but it sat on property where Florida East Coast (FEC) Railway police have jurisdiction. Located near a string of low-budget motels, the campsite was home to upward of two dozen people.

1-866-JUNK-BE-GONE president Jorge Bustamante tells New Times his company was contracted by FEC to clean debris from the homeless camp and around the tracks. Before his team arrived to clear the area, Miami-Dade County's Homeless Trust went to the camp to offer emergency shelter and other provisions to those living there. Four people from the bridge site agreed to quarantine at a local hotel and three refused services, according to the Homeless Trust.

Bustamante says accessing the camp by land was too difficult, so on March 29, his crew launched a flat-bottomed jon boat from Miami Springs.

Hialeah fire-rescue units were dispatched to the site. According to Bustamante, one man pulled out a shovel to ward off intruders but fled as police arrived.

"It's a horrible place for a fire," he says. "The fire department had no way to get a truck there. They had to run alongside the canal from West 12th Avenue and Okeechobee Road with fire extinguishers."
click to enlarge 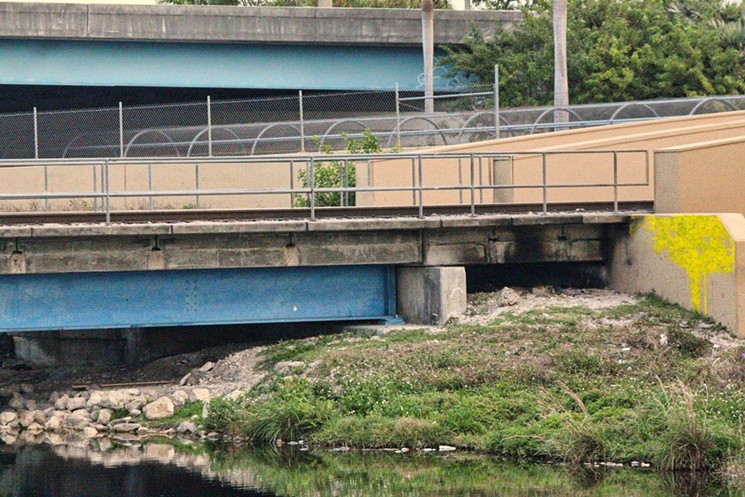 A homeless camp was set ablaze, then cleared out, near the site of a proposed $2 million Okeechobee Metrorail pedestrian bridge.
Photo by Theo Karantsalis
New Times requested incident reports from Hialeah Fire Rescue, the Hialeah Police Department, and the Miami Springs Police Department, all of which responded to the scene. But each of the three agencies said no report was written.

The homeless camp was situated near the site of a proposed $2 million pedestrian bridge that would connect Miami Springs with the Metrorail station at 2005 W. Okeechobee Rd. Miami Springs Mayor Maria Puente Mitchell said at a May 5 city council meeting that the project is in the design phase pending county and Florida Department of Transportation approval.

At the same meeting, city leaders discussed annexing the area west of the FEC tracks, including the patch of land where the encampment had been located. No mention was made of the eviction and fire at the homeless camp.

Bustamante says he feels bad for those who lived under the bridge but that they received "months and months of warnings" that went unheeded, and he was just doing his job. He says his company was recently hired by other agencies to clear two other homeless camps but declined to say where.

Even as the coronavirus pandemic raged across South Florida over the past year, many cities have razed homeless encampments, ignoring guidance from the U.S. Centers for Disease Control. The CDC has recommended that officials not uproot people who are living unsheltered or in encampments unless individual housing options are available.

The CDC cautioned that "clearing encampments can cause people to disperse throughout the community and break connections with service providers," increasing the potential for the spread of infectious disease.

Last year, advocates for the homeless accused Fort Lauderdale city officials of dismantling an encampment by building a parking lot in the area.

And from January 1 to April 8 of this year, the City of Miami conducted 23 homeless-camp clearings, according to discussion at a recent city commission meeting.

"There has been a campaign to close and clear homeless encampments about Miami," says Benjamin Waxman, a volunteer lawyer with Miami's ACLU chapter.

Waxman has championed local homeless-rights issues for decades and was the lead attorney in Pottinger v. City of Miami, a landmark 1988 class-action lawsuit brought on behalf of thousands of homeless persons against the city for civil-liberties violations.

"The enforcement actions that the city was taking were palpably outrageous," Waxman recounts. "They were summarily seizing and destroying their property and basically attempting to disappear them and disregard the circumstances of their homelessness."

Litigation in the Pottinger case stretched for more than ten years until the City of Miami agreed on a consent decree in 1998.

For two decades, the decree shielded homeless people from city-sponsored harassment and property destruction; prior to evicting homeless people violating local laws simply by engaging in "life-sustaining activities" such as sleeping on a sidewalk, urinating in public, or being in a park after curfew, police had to issue an initial warning and offer available shelter.

Last fall, a federal appellate court terminated the decree, opening the door for more aggressive sweeps of homeless camps. Waxman argues that the sweeps are both inhumane and ineffective.

"Homeless people are members of our community and neighbors just like people who live in houses and apartments, and they need to be treated with dignity and respect," he asserts. "People need a reasonable alternative to living on the streets, and that is where I think we should focus our efforts."
KEEP MIAMI NEW TIMES FREE... Since we started Miami New Times, it has been defined as the free, independent voice of Miami, and we'd like to keep it that way. With local media under siege, it's more important than ever for us to rally support behind funding our local journalism. You can help by participating in our "I Support" program, allowing us to keep offering readers access to our incisive coverage of local news, food and culture with no paywalls.
Make a one-time donation today for as little as $1.