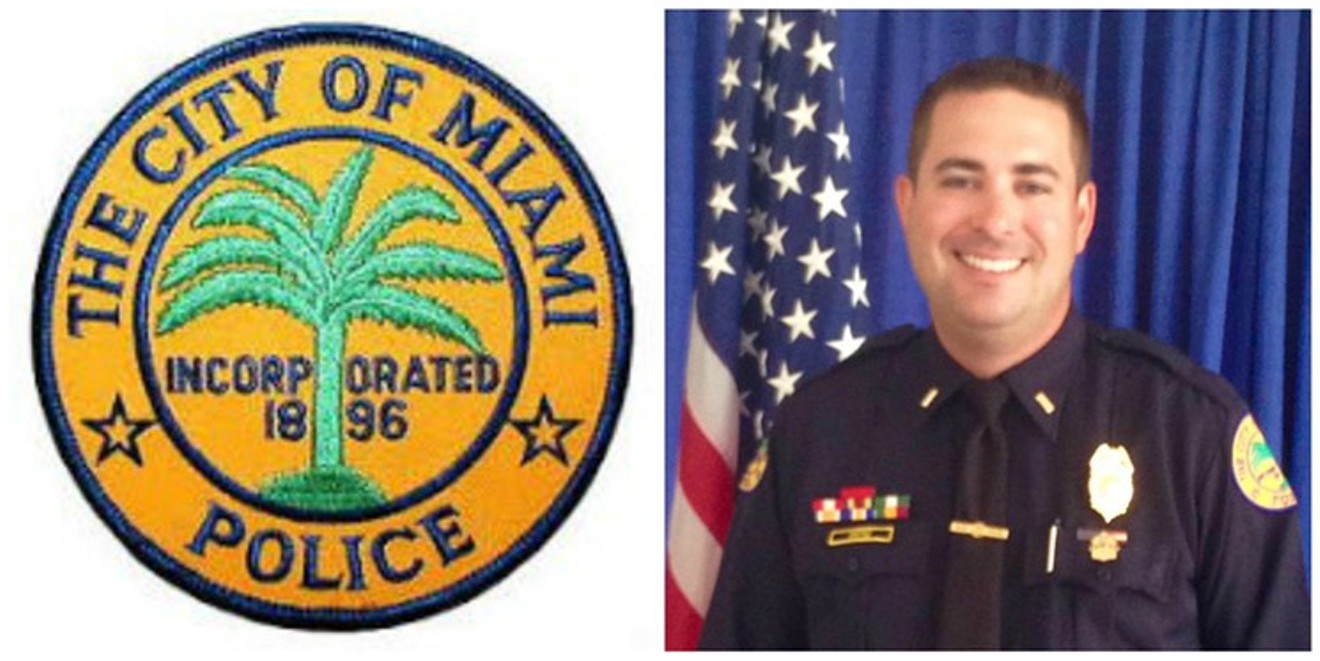 Capt. Javier Ortiz Images via City of Miami
Last Friday, the Miami Police Department's former union boss, Capt. Javier Ortiz, stood stone-faced at a lectern at Miami City Hall and claimed he is neither white nor Hispanic but "a black male."

After writing he was a white Hispanic man on an application to work for Miami PD, Ortiz in 2014 and 2017 claimed he was black on official paperwork. The Miami Community Police Benevolent Association, a union for black officers, has since demanded that Ortiz be punished and that Chief Jorge Colina either deal with racists operating inside his department or step down.

After the video of Ortiz's speech went viral, the Miami-Dade chapter of the National Association for the Advancement of Colored People (NAACP) wrote on Instagram that it was baffled and outraged by Ortiz's comments.

"This is video of an active City of Miami cop at a commission meeting where the topic of discussion is on Racial Equity within the police department," the NAACP wrote Saturday. "His comments are disturbing. And in the manner of how he used them, downright disturbing to say the least."

Neither Mayor Francis Suarez nor Colina responded to messages from New Times yesterday. But over the weekend, the Miami Times reported that the two officials had discussed Ortiz's comments and that the city was exploring firing the captain. In the article, Suarez called Ortiz's statements "not good" and said Colina "will explore his options and can do whatever's legally permitted to do."

Ortiz did not respond to a message from New Times yesterday afternoon.

This is video of an active City of Miami cop at a commission meeting where the topic of discussion is on Racial Equity within the police department. . . His comments are disturbing. And in the manner of how he used them, downright disturbing to say the least. . .

Ortiz, far and away the most controversial and well-known cop in Miami, has for years fended off critics. He has faced lawsuits from victims who've said he falsely arrested or racially profiled them, repeatedly defended cops who've killed unarmed black people, drawn a demon face on the mugshot of a black defendant, started a "We Support Darren Wilson" Facebook page, attempted to initiate a boycott of Beyoncé, and been accused of falsely arresting two black NFL players in separate incidents. Ortiz also nearly lost his job in 2017 after he doxxed a police critic online and told his followers to contact her at her personal number.

Somehow, he has remained on the force and even been promoted. But the city is now reportedly looking into whether he is abusing the city's off-duty work rules and whether he lied on his 2014 lieutenant's application and 2017 captain's application by claiming he's black. Ortiz last Friday, though, claimed he correctly identified his race.

"I'm a black male," he said at the commission meeting. "Yes, I am. And I am not Hispanic. I was born in this country. That's how I feel."

After some questions from city commissioners, Ortiz then told Commissioner Keon Hardemon: "Oh, no, you're blacker than me — that's obvious. And if you know anything about the one-drop rule, which started in the 20th Century, which is what identifies and defines what a black male is, or a Negro, you would know that if you have one drop of black in you, you're considered black."

After his comments caused a stir online, Ortiz tweeted that everyone was making a big deal out of nothing.

"This isn't news," he wrote over the weekend. "People love making stereotypes. It’s actually refreshing to be who you are, like an American."
KEEP MIAMI NEW TIMES FREE... Since we started Miami New Times, it has been defined as the free, independent voice of Miami, and we'd like to keep it that way. With local media under siege, it's more important than ever for us to rally support behind funding our local journalism. You can help by participating in our "I Support" program, allowing us to keep offering readers access to our incisive coverage of local news, food and culture with no paywalls.
Make a one-time donation today for as little as $1.