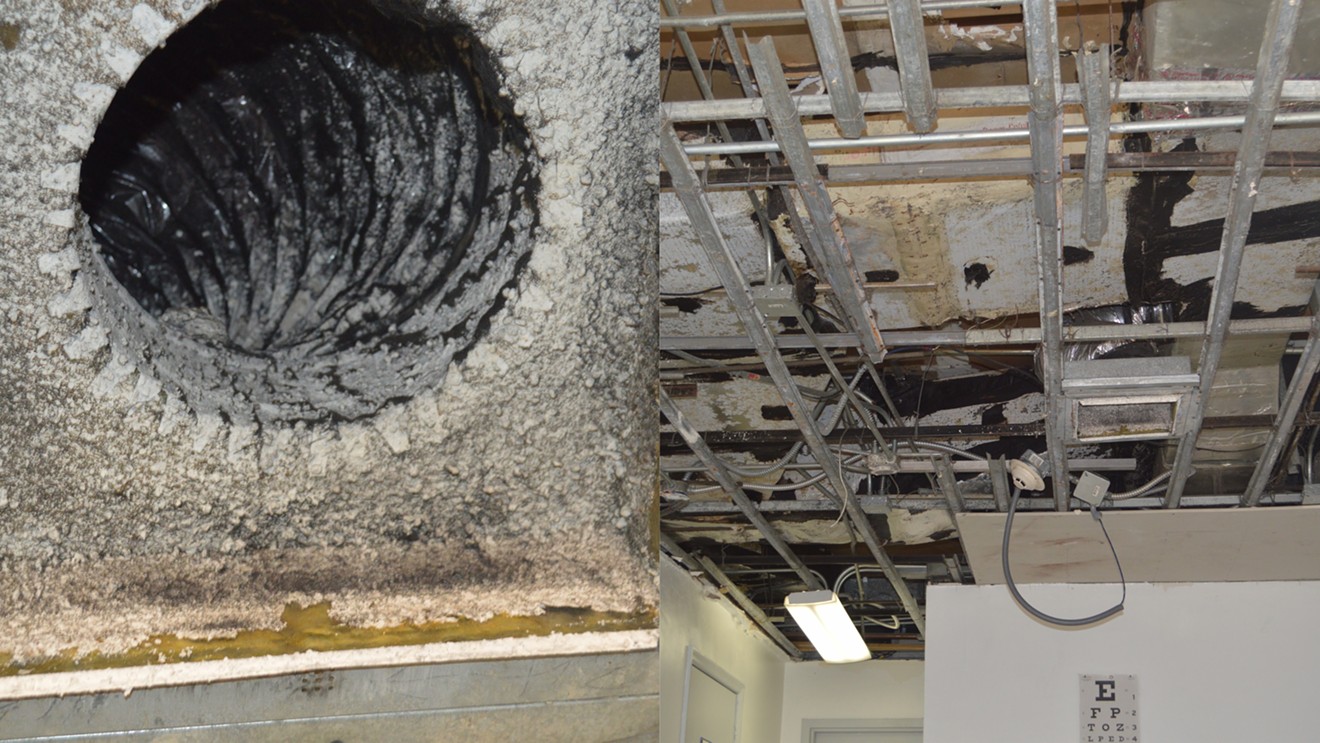 Anonymous
Inmates and guards inside the Federal Correctional Institution in Miami (FCI Miami) have complained for years that the facility is full of enough mold and mildew to sicken those inside. In 2018, New Times obtained documents showing the Occupational Health and Safety Administration (OSHA) has repeatedly found leaking ceilings and mold growing on walls in multiple rooms.

Now New Times has obtained photos taken this week, and they're not pretty. The health-services ward appears to have mold and mildew growing in air-conditioning ducts and portions of the ceiling despite the fact that OSHA has repeatedly ordered the problems fixed.

Additional documents obtained by New Times show the facility's union, the American Federation of Government Employees Local 506, has been complaining for years about the issue as well as constantly malfunctioning air-conditioning. This past September 7, the union filed yet another OSHA complaint over the mold growing throughout the prison. The letter states:

Allegedly, employees are being exposed to upper respiratory illnesses from alleged mold exposure. The hazards are located in the following areas:


Kareen Troitino, head of the local union chapter, told New Times yesterday that employees have been calling out sick due to respiratory illnesses and that if the conditions are affecting guards, they're also harming inmates.

"The agency doesn't care about inmates, staff, or public safety — their main priority is to save money," union president Troitino said. "The higher the cost savings, the higher bonuses are awarded to the agency's higher-end executives."

For years, the union has complained that malfunctioning air-conditioning units have contributed to the mold problem. (For what it's worth, at least the facility has A/C — most state correctional facilities, in contrast, are not air-conditioned.) In June, A/C units failed in the FCI Miami's Special Housing Unit (essentially the solitary-confinement cells) during a monthlong heatwave. Inmates held in those units had to be temporarily transferred to the Federal Detention Center in downtown Miami.

Documents obtained by New Times show the union has been complaining about malfunctioning A/C units since at least last October.

"Numerous employees in your department are being forced to work in inhumane working conditions and are suffering from headaches, dehydration, allergies, and other ailments caused by the humidity, heat, and lack of ventilation in your department," Troitino wrote in an email to the federal Bureau of Prisons this past August 23.

Mold has been a long-standing issue at the facility: New Times previously reported that OSHA found hazardous levels growing across the facility during inspections in 2017 and 2018. In fact, when Hurricane Irma hit Florida in 2017, the Bureau of Prisons flew additional guards to Miami from Orlando and Georgia — and those new guards complained about being housed in mold-infested cells.

Spokespeople for the Bureau of Prisons this week said they were "looking into" the latest round of complaints but did not immediately respond to New Times' request for comment.
KEEP MIAMI NEW TIMES FREE... Since we started Miami New Times, it has been defined as the free, independent voice of Miami, and we'd like to keep it that way. With local media under siege, it's more important than ever for us to rally support behind funding our local journalism. You can help by participating in our "I Support" program, allowing us to keep offering readers access to our incisive coverage of local news, food and culture with no paywalls.
Make a one-time donation today for as little as $1.