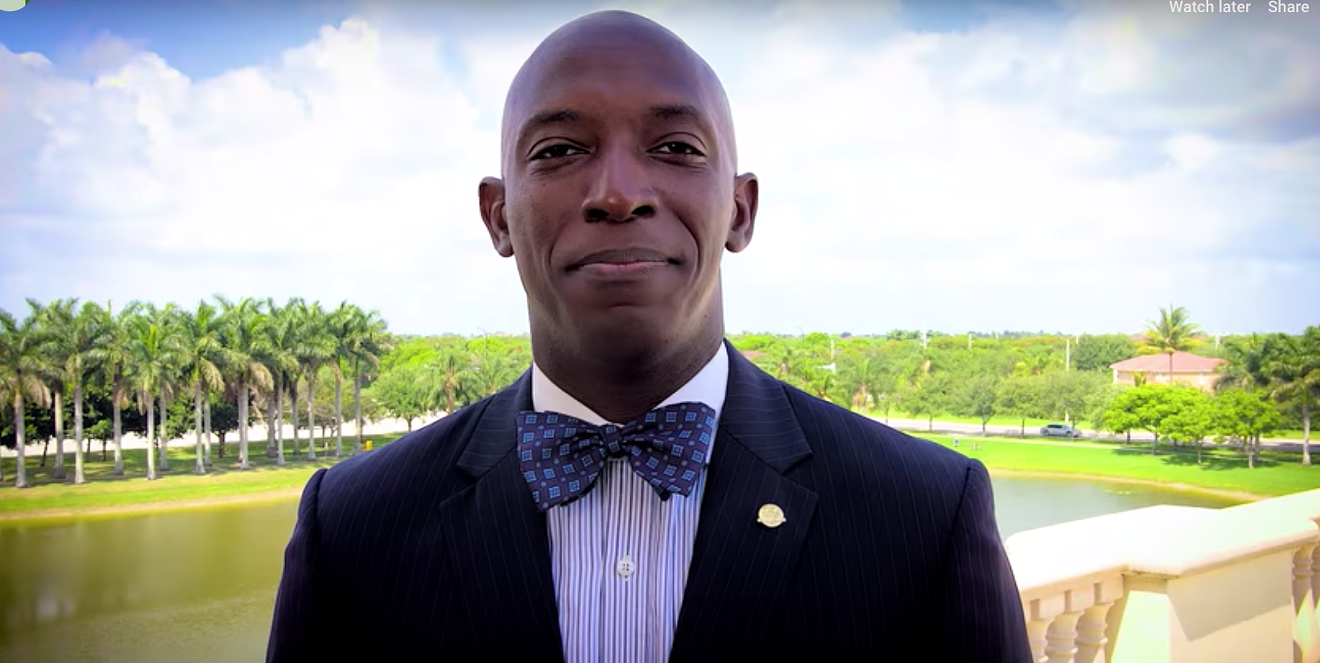 Miramar Mayor Wayne Messam screenshot via City of Miramar
Despite stiff competition, Miramar Mayor Wayne Messam announced last month he was entering the already crowded field of Democratic presidential candidates. So far, his campaign events have been sparsely attended, and he's raised only a sliver of what his competitors have. But for some reason, national media is treating his presidential bid seriously — Nate Silver's FiveThirtyEight says it's "keeping an eye" on him, and last week, CBS News invited him to an on-air interview.

According to a recently departed staffer, however, the campaign is in chaos behind the scenes. The staffer, whose credentials were verified by New Times but who declined to be named, says Messam's team didn't receive paychecks Monday. As a result, multiple campaign employees resigned this week, according to the source.

Screenshots of an email detailing the meltdown were sent to New Times Thursday. With the subject line "Notification of hold on paychecks," the message apologizes for the failure to pay, a problem attributed to Messam's wife, Angela. The email, which was forwarded to the entire campaign team Monday night, appears to have come from someone in charge of payroll.

"Regretfully, I think it is only fair to inform you that Angela Messam, wife of Wayne Messam, has consolidated all of the financial and banking assets of the campaign under her exclusive control and is currently refusing to issue paychecks to staff," the email states. "You are all great, hardworking, talented professionals who deserve to be paid for your hard work."

Reached by New Times, Wayne Messam said he was aware of the all-staff email about payroll. But he declined to substantively answer any questions.

"At this point, we've secured counsel to resolve any of this miscommunication, but we look forward to continuing forward as a campaign," he said. Asked for further explanation, he only repeated that he had retained a lawyer.

Messam also would not say how many staffers had left his campaign.

"I'm not in a position to talk about that specifically," he said.

Later, Messam's attorney, Wendell Locke, told New Times there was confusion. "I think they’re trying to get some affirmation on who worked and who was hired. I think that’s where there’s some miscommunication," Locke said. "To be honest, I don't know if [Messam] knows everybody who's working for him in the campaign. I don't know."

The anonymous staffer who spoke with New Times left Messam's campaign earlier this week. Team members who resigned have been shut out of their campaign email accounts, the person said. Troublingly, it appears Messam is monitoring his employees' inboxes. On Thursday morning, New Times sent an email to Messam's spokeswoman, Charly Norton, requesting comment on the payroll freeze and asking if she had also been affected. A separate message was then emailed to Messam and his wife.

Minutes later, a campaign volunteer named Karen called the newspaper with more questions about the payroll issue. In a followup email coordinating a phone call with Messam, Karen added the staff had read the email intended for Norton, who did not respond to New Times. "FYI your request has been received and being reviewed," Karen's email stated. "In addition, we received your email to Charly [Norton]." (It's unclear if Norton still works for the campaign.)

Earlier this week, the Sun-Sentinel wrote glowingly about how Messam had hired an all-star team, including several with experience working for Barack Obama, Bernie Sanders, and Andrew Gillum. Since then, it appears many have scrubbed their social media profiles of any reference to Messam.

So far, Messam's fundraising totals are dwarfed by those of his competitors. As of the first filing deadline Monday, Messam's campaign had raised just $43,531, putting him at the bottom of the pile of Democratic candidates. (Fourteen Democratic candidates have raised more than $1 million.) Embarrassingly, Messam incorrectly counted his fundraising totals in his initial report to the Federal Election Commission, according to CNN, originally stating he'd collected almost $84,000 before submitting a revised report showing about half that. He attributed the mistake to a software glitch.

Messam has multiple out-of-state campaign events scheduled for later this month and the beginning of May. He says he's currently focused on making it to the Democratic debate stage this summer, which will require improving his polling numbers or increasing his donor base. The first Democratic debates take place June 26 and 27 in Miami.

"The Wayne Messam campaign has gained a lot of momentum," he says. "We're very excited about where we are as a campaign."
KEEP MIAMI NEW TIMES FREE... Since we started Miami New Times, it has been defined as the free, independent voice of Miami, and we'd like to keep it that way. With local media under siege, it's more important than ever for us to rally support behind funding our local journalism. You can help by participating in our "I Support" program, allowing us to keep offering readers access to our incisive coverage of local news, food and culture with no paywalls.
Make a one-time donation today for as little as $1.