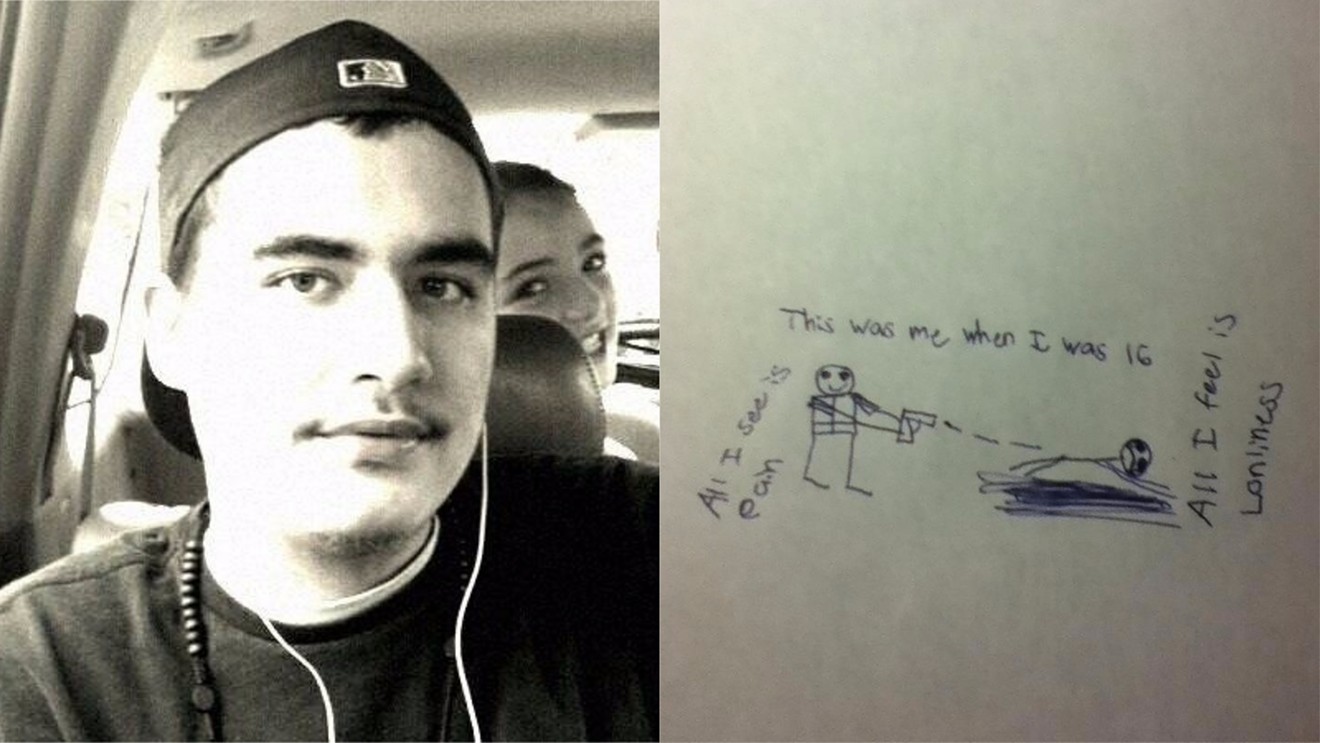 Amalia Villafane via Facebook
At 3:30 a.m. Monday, May 28, 2012, Miami-Dade County Police Officer Luis Perez drove his squad car through the Hammocks area of West Kendall on a hot and humid morning. He passed a teenager, later identified as 16-year-old Sebastian Gregory, wearing a baggy black sweater, black pants, beanie cap, black shoes, and what Perez later claimed was a gun sticking out of the teen's pants. Perez claimed Gregory reached for the supposed gun while he was lying on the ground, so the officer fired six rounds into the teenager's back.

The gun turned out to be a metal baseball bat.

Gregory miraculously survived and sued MDPD in April 2013 for using excessive force and violating his civil rights. But before he could see the case to its end, he killed himself in January 2016 after struggling for years with medical problems stemming from his wounds, including a paralyzed leg.

Gregory's father, Andres, continued to fight in court. Though Officer Perez initially succeeded in having the case killed, on November 17, Gregory's family won a judgment against the cop and the police department in a federal appellate court and succeeded in reopening the case, which will now proceed with a full trial.

The judge in the case suggested police will have tough questions to answer about why Perez shot an unarmed teen so many times as he lay on the ground.

"This case involves not just any battery — such as punching, kicking, or beating — but an egregious, aggravated battery of shooting Gregory with a firearm in the back," federal circuit Judge Frank Hull wrote. "Under Gregory's pled facts, there is not even a pretense of a lawful right to shoot Gregory in the performance of Officer Perez's duties."

Hull added that the case was remanded down to the Southern District of Florida for "a trial on the remaining claims."

In light of the dire facts of Gregory's case — even before his tragic suicide — it's surprising the story hasn't received more publicity. In 2014, Miami-Dade County State Attorney Katherine Fernandez Rundle closed an investigation into the shooting and cleared Perez of any wrongdoing. The latest court decision raises new questions as to why Rundle's office failed to take action for what a federal judge now suggests could be an illegal shooting. (As previously reported, Rundle's office had cleared every single on-duty officer who had shot a suspect from her election in 1993 until 2017, when she charged North Miami Police Officer Jonathan Aledda with attempted manslaughter for shooting an unarmed citizen, Charles Kinsey, in the leg. She has still never charged a police officer for actually killing someone on the job.)

No one called police about Gregory the day he was shot. Perez simply drove past a teenager in a sweatshirt and thought he looked suspicious. Perez turned on his lights, got out of his car, and drew his gun while Gregory walked.

Perez, for some reason, approached with his gun drawn from the outset of the encounter. After Perez shouted and identified himself, the teen stopped and turned around.

According to the judicial order, Perez then realized the two had come into contact the previous month. Perez had arrested Gregory for carrying concealed weapons, including two knives and the same metal baseball bat. Gregory had an open warrant after failing to show up for his court date. After recognizing Gregory, Perez ordered him onto the ground.

This is where police and the family's accounts differ. Perez claims he stood to the teenager's left side with his gun drawn as Gregory rolled up onto his left side and reached toward a metallic object in his pocket, prompting the officer to shoot the teen. But even if that story were true, Gregory was carrying only a baseball bat.

The teenager, though, testified that his hands never left the ground and said he remained prone the entire time while the officer questioned him. He says he was lying on top of the metal bat and simply "wobbled his leg" to make himself more comfortable. Gregory said that once he shook his leg, Perez began firing.

"I tried to move the bat to one side and that's when the officer shot me," Gregory told a Colombian TV station in January 2015.

Forensic evidence showed six bullets entered Gregory's body from both the left and right sides. One bullet pierced the baseball bat. Another struck the base of Gregory's spine.

“I was screaming," Gregory later told NBC Miami. "It’s when I pushed up that I saw the blood gushing everywhere. There was a cop that kept telling me to show my hands even when I was on the ground shot.”

Sebastian Gregory was 16 years old when he was shot 7 times in the back by a Miami-Dade County Police Officer. He suffered being partially paralyzed, in a constant state of pain, sexually impotent, and going in and out of surgery because of the bullet lodged in his back. Then he took his own life. -- We've spent a lot of time with his parents who are seeking justice in their son's name. We must abolish the police and avenge the lives of our people assasinated by police. I want to fight everyday with families like Sebastian's, dreaming of a more just, more equitable, more safe world for Black and Brown and children.

Gregory's father also complained that MDPD placed Perez back on regular duty after the shooting.

“He shot a kid,” Andres Gregory told NBC at the time. “My son was 16 years old, and [Perez is] in the street like nothing happened. I’m afraid for the other kids on the street and what could happen to them.”

The family initially sued MDPD and Perez in April 2013. A lower-court judge ruled in favor of Miami-Dade County and Perez in October 2016 and closed the case, awarding Gregory's family nothing.

But in the new judicial order filed earlier this month, Hull wrote that the law "was clearly established as of May 28, 2012, that shooting a non-resisting suspect who has done nothing threatening and thus posed no immediate danger violates the Fourth Amendment right to be free from the use of excessive force." Hull added that Gregory was, in that moment, neither suspected of a violent crime nor fleeing.

"Instead, Gregory 'wobbled,'" the judge wrote this month.

According to NBC, although doctors feared Gregory would never walk again, he did eventually regained the use of one leg and was able to move around using a walker. But one leg remained paralyzed. He also told the TV station he became sexually impotent and said he also missed walking his dogs to the park and playing sports with his friends. His mother, Amalia, told NBC that her son was depressed and had trouble getting out of bed. After fighting multiple rounds of court appeals, Gregory killed himself January 16, 2016.

In the year since Gregory died, his family has refused to let the public forget what happened to their son. At a few recent community meetings, they brought white T-shirts with one of Gregory's notes printed on the front. He'd drawn a stick-figure depiction of Perez shooting him in the back.