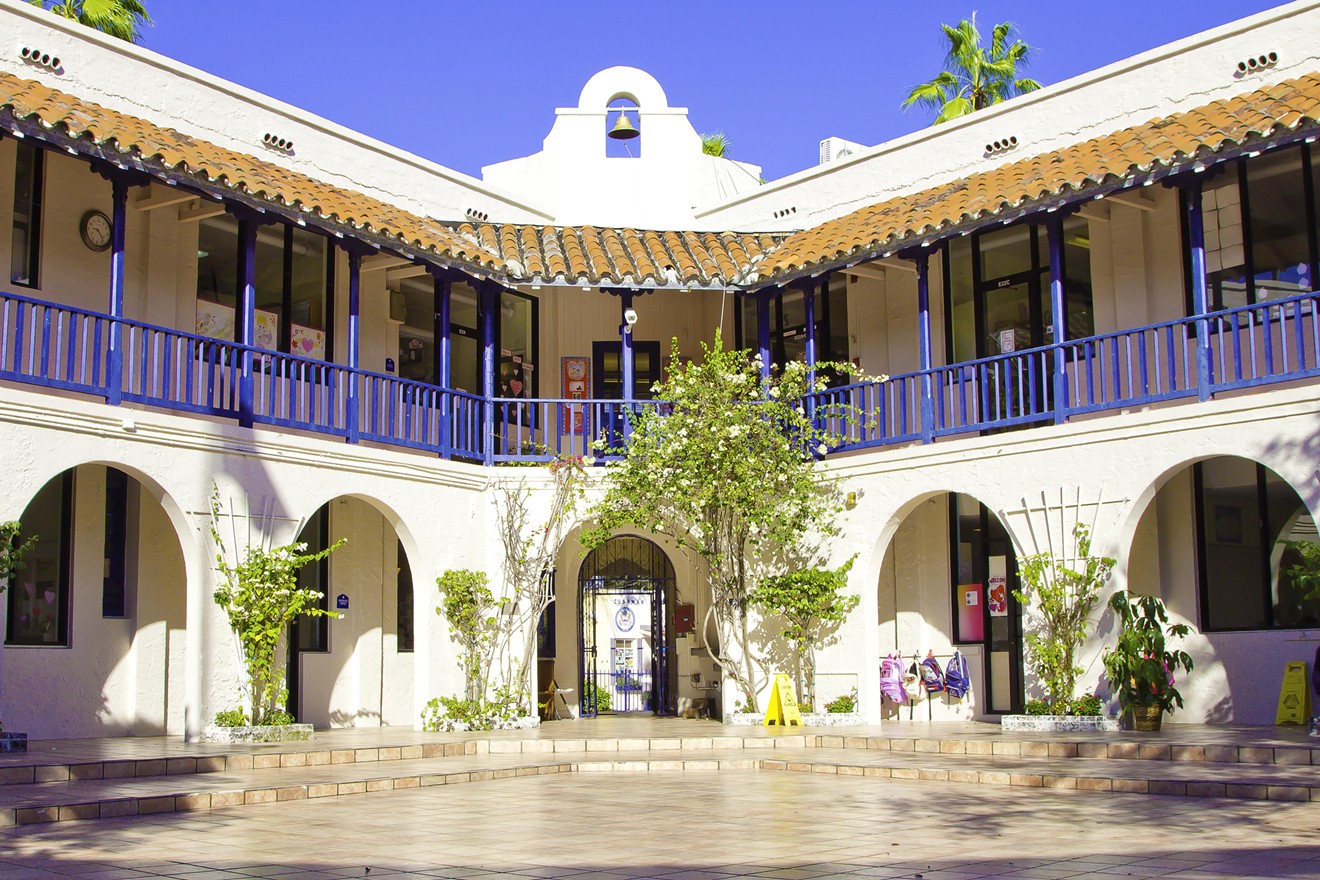 Administrators at Miami's private Cushman School say they've installed a high-tech gun-detection system. Photo by Pedro Hernandez / The Cushman School
The back-to-school season never seemed so grim. To the dismay of parents, bulletproof backpacks now join 64-count crayon boxes and binders on shopping lists for the new school year. Teachers balance active-shooter drills with putting together a curriculum and grading assignments. In many ways, gun violence continues to shape schools across the nation.

Enter the security systems of the future: Administrators at Miami's private Cushman School say they've installed a high-tech gun-detection system on their primary and elementary school campus on the Upper Eastside. The system, provided free of charge to the school by the Fort Lauderdale-based vendor ITContingency, turns school security cameras into active monitoring systems that use artificial intelligence to detect firearms on campus and immediately alert school officials and local police.

According to ITContingency, the system can detect a firearm within seconds and provide live tracking of the gunman anywhere on campus. The system has been fully installed in all ten classrooms in Cushman's elementary school, but its middle school is still undergoing installation, according to the school's risk manager, Jill Sevilla. Details about adding the system to the high school are being hammered out, but Sevilla is confident it will happen soon.

Since the 2018 shooting at Marjory Stoneman Douglas High in Parkland, Florida schools have been in the vanguard when it comes to devising and implementing school security programs. Some have worked out better than others. Hard-boiled plans to arm schoolteachers to the teeth largely fizzled out across the state, while initiatives to install GPS trackers on school buses and sync live feeds from public schools to local police have gained traction in places such as Miami-Dade County. As discussions of technological developments and hardened security measures continue to percolate, parents and privacy advocates have begun to raise concerns about new surveillance methods in classrooms.
Cushman is Miami-Dade's oldest continually operating private school, serving students in kindergarten through 12th grade on two campuses a mile apart near Biscayne Boulevard. Although both locations are gated and staffed with multiple security officers, administrators say the ever-looming threat of a shooting still weighs heavily on parents and students.

"There's so much worry around the threat of a school shooting," says Arvi Balseiro, the head of school at Cushman. "What we wanted to do was find the best technology possible that's effective and won't trigger anxiety in a child like metal detectors [do]."

Just this summer, Cushman ordered more two-way radios for all classrooms and offices, hardened the security checkpoints on its school grounds, and purchased additional fencing around the campus. Last year, administrators acquired touch screens for every classroom for teachers to use in case of an emergency, as well as an LED warning system throughout the school. Now, in the event of a gunman on campus, not only will the usual buzzing alarms go off around the school, but also the warning lights will flash red to signal a lockdown. The school's faculty also recently underwent a school shooter training session with Miami Police.

In schools across the nation, there's a growing sense that the old ways of ensuring the safety of students are no longer sufficient. Security system manufacturers such as ITContingency are forming rapidly, offering new technology to achieve peace of mind. But the recent high-tech renaissance is no panacea and not without its detractors.

Though Cushman is making use of only gun-detection technology, ITContingency's systems are also capable of facial recognition and license-plate reading. Such systems, particularly those involving facial recognition, have ignited serious debates at schools in states such as New York and Missouri. Facial recognition algorithms have been shown to be far less accurate when identifying women, minorities, and children.

Then there are privacy concerns. In the case of ITContingency's systems, the facial recognition tech can operate only if biometric information is fed into a list of people not allowed on the premises (e.g., a disgruntled former employee, expelled student, or parent without visitation rights). But how does a school obtain that biometric information, how will that data be stored, and who has access to it?

"The potential for misuse with these technologies can't be understated," says Michelle Morton, policy coordinator for juvenile justice at the Florida chapter of the American Civil Liberties Union. "Conceivably, this technology could be used to catch undocumented immigrants bringing their kids to school or track someone accused of a petty offense, depending on who the information is shared with."

The case against the new surveillance tech can also be pragmatic. Take, for instance, the case of gunshot detectors. In 2016, Miami-Dade officials revived a multimillion-dollar partnership with ShotSpotter, which uses acoustic sensors to alert police to gunfire within a few miles of the sensor. The county had piloted and abandoned the technology many years earlier due to evidence of its ineffectiveness in solving crimes. Yet ShotSpotter installations have continued — according to a 2018 New York Times story, ShotSpotter sensors cost $65,000 to $85,000 per square mile. This summer, Miami Police installed a ShotSpotter on one of the two Cushman campuses.

"At the end of the day, these high-tech, high-cost solutions are taking dollars away from more concrete solutions like hiring more student counselors, mental-health professionals, and even basic school-hardening techniques, like covering up windows," says Amelia Vance, senior counsel and director of education privacy at the Future of Privacy Forum.

According to ITContingency chairman and CEO James Woodyatt, a full security system with all the bells and whistles would run about $500,000 for an average-size school with 50 classrooms, though the company is offering systems at low or no cost to certain schools. The child of ITContingency's chief technology officer, Aaron McKay, is a former Cushman student, and the company's chief financial officer, Gregg Rodes, was in the first graduating class from Marjory Stoneman Douglas High.

Woodyatt says the issue of school security hits home for the company, although it recognizes the ethical concerns that come with expansive surveillance technology. Woodyatt clarifies it's the clients' decision on how to deploy it, from collecting and sharing biometric information to deciding who receives an alert when a shooter is detected.

"We don't know how [our clients] get their biometric information. We give them a system, and how they get the images of the people they want to look out for, we don't know," Woodyatt says. "[Clients] decide how they want the system to function. They have their own internal rules. We try to be as neutral as possible on everything."

Cushman has avoided many of these ethical quagmires for the time being by opting to stick to gun-detection technology, but Balseiro says facial recognition remains a possibility in the future for faculty and other adults.

"There are serious privacy concerns, and it's important to stress that protecting the privacy rights of children is our goal," she says. "We would never scan the face of a child."

If the school considers implementing facial recognition technology, parents, board members, and teachers will be allowed to deliberate on the prospect, Balseiro says.

As head of school at Cushman, she has been forced to wrangle with rising concerns over school shootings. The same month of the Parkland shooting, Balseiro held an event where Cushman students were invited to toss violent videogames into a bin, and parents were encouraged to sign a pledge that they wouldn't allow their kids to play such games. Experts overwhelmingly agree there is scant evidence linking videogames to violent activities in real life.
KEEP MIAMI NEW TIMES FREE... Since we started Miami New Times, it has been defined as the free, independent voice of Miami, and we'd like to keep it that way. With local media under siege, it's more important than ever for us to rally support behind funding our local journalism. You can help by participating in our "I Support" program, allowing us to keep offering readers access to our incisive coverage of local news, food and culture with no paywalls.
Make a one-time donation today for as little as $1.