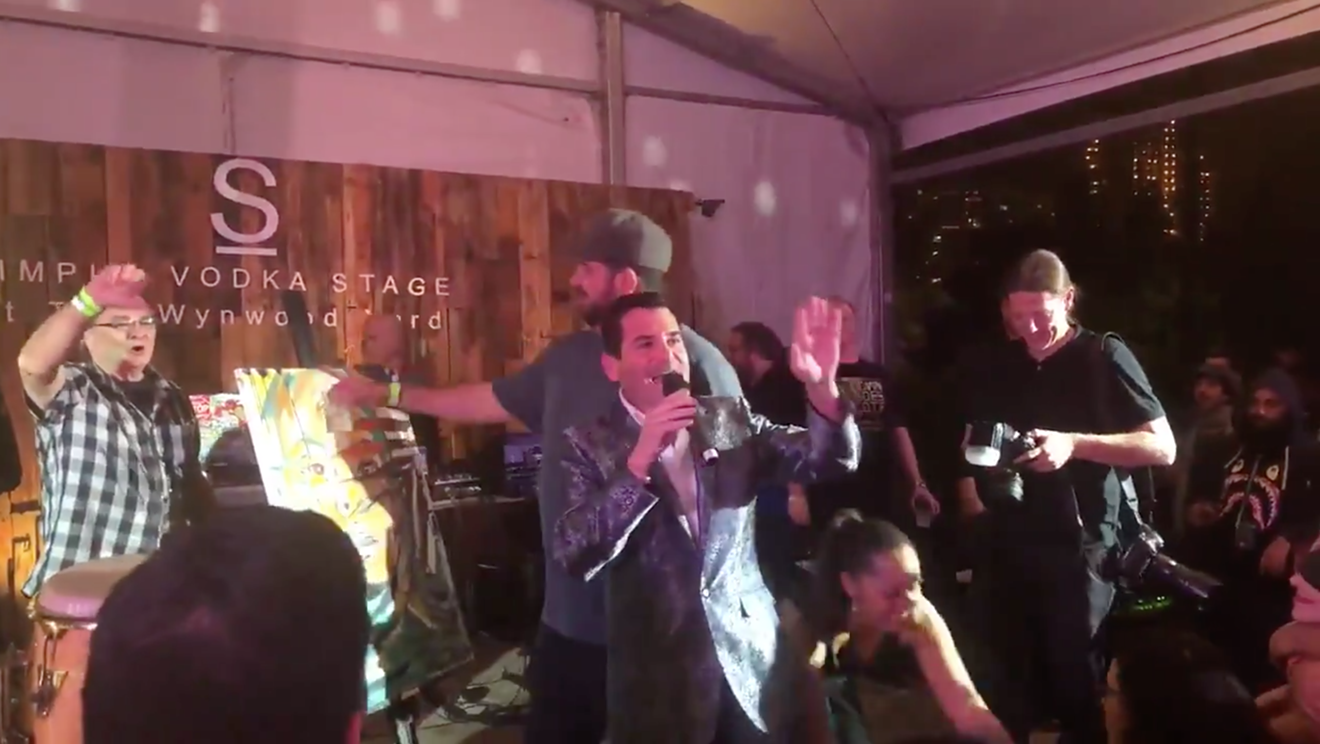 At this point, every single person who worked for the Miami Marlins when Jeffrey Loria owned the team should be under strict FBI surveillance. Robert Mueller should be stalking these people. They keep revealing themselves to be vampires.

Case in point: Loria's former team president, David Samson, hopped onto a stage at ESPN personality Dan Le Batard's birthday party over the weekend and bragged about fleecing Miami taxpayers and sports fans after Loria sold the team for literally a billion dollars. Samson then flipped off the crowd. Had there not been , he might have been guillotined, though Le Batard and Samson now claim that this was some sort of planned "skit." If true, the skit sucked.

Despite the fact that the Wynwood Yard is a low-key hipster joint — Le Batard wore a flat-brimmed cap and oversize T-shirt to his own party — Samson showed up in a shiny rich-guy coat and dress shirt. He walked onstage to a hail of booing from the sort of drunk bros who would hang out at a Dan Le Batard event, though Le Batard and company now claim the crowd was encouraged to boo the executive. (Samson confirmed, however, that he was not reading from a script and that he said what he said on-the-spot.)

But the jeering was absolutely warranted. Samson helped run an organization that spent pennies for players, lost constantly, repeatedly pissed off longtime fans, ruthlessly sued its own ticketholders, and legitimately hoodwinked taxpayers to fund a new ballpark that nobody wanted or needed. (The stadium deal was so unpopular it sparked a Securities and Exchange Commission investigation and got the county mayor recalled.)

So how did Samson respond to fans? He flipped them off and bragged that he and Loria's cartoonishly evil antics helped the owner sell the team for $1.2 billion. That followed a deal, which helped broker, that allowed Loria to pay only $150 million for the team. (Some estimates have put that number even lower.)

"Thank you so much; thank you very much," a drunk-sounding Samson stammered into a microphone as Le Batard lumbered behind him. "Here's why I love when you guys boo me. Right. I want you to keep booing me. Because guess what? One-point-two billion. Fuck you!"

Le Batard shook his head and grabbed the microphone from Samson:

Here is @DavidPSamson’s entrance at Mas Miami. One of the funniest things I’ve seen in quite some time. pic.twitter.com/19x86I2zYA


(Side note: Anyone the time Le Batard wrote story for Cosmopolitan about trying to bed women, which he titled "I Am the Hunter"? The piece was weird and gross.)

It is honestly a miracle that Samson was not pelted with beer bottles until he turned to dust. He has a habit of acting like an asshole, likely because he is one: In 2015, New Times published a listicle chronicling the times Samson has said dumb and/or mean and/or offensive things. In 2012, he called Miami voters "stupid" right after he wheedled a ton of money out of them. The following year, he said he hoped to make even more money from the sad, horrible baseball team he ran. He then went on the TV show Survivor and bragged that his claim to fame was he conned Miami officials into giving him ludicrous amounts of public money to build an unnecessary stadium "during the recession."

This past weekend, Samson was back at it. (Frankly, it was Le Batard's fault for giving him a microphone.) Somebody, please dump a beer on this clown already.

Update: After this story was initially published, Samson appeared on Le Batard's radio program and confirmed that he was not reading from any sort of pre-planned script. He said what he said unprompted.

"I didn't know you were going to do that," Le Batard said on-air.

"All I knew I was going to do was sing 'Happy Birthday' at midnight, Samson responded. He did not apologize.
KEEP MIAMI NEW TIMES FREE... Since we started Miami New Times, it has been defined as the free, independent voice of Miami, and we'd like to keep it that way. With local media under siege, it's more important than ever for us to rally support behind funding our local journalism. You can help by participating in our "I Support" program, allowing us to keep offering readers access to our incisive coverage of local news, food and culture with no paywalls.
Make a one-time donation today for as little as $1.