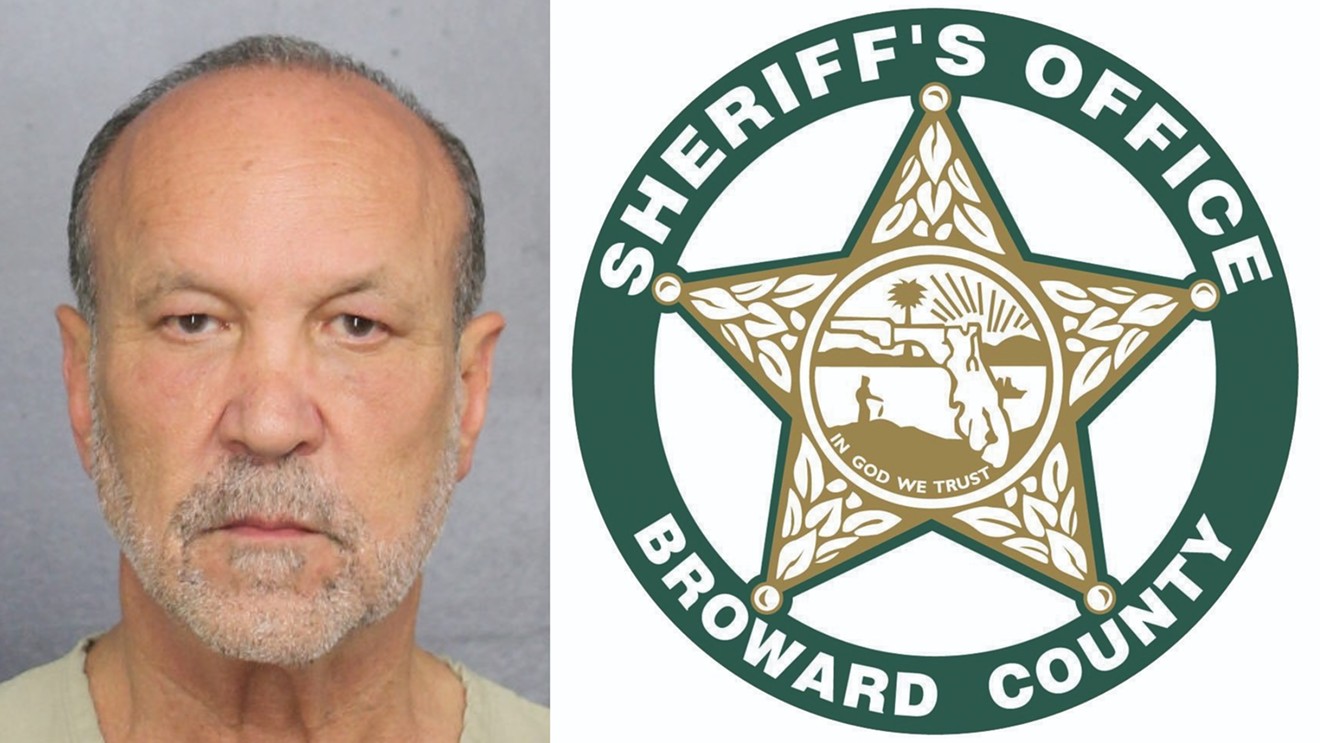 Photos via Broward County Sheriff's Office
Ron Book, one of the most powerful lobbyists in Florida, was arrested Sunday for DUI, according to the Broward Sheriff's Office online arrest database. Book is one of the most influential behind-the-scenes political figures in the state. In addition to being the lobbyist for powerful private firms such as the prison giant GEO Group, Book is also the official lobbyist for Miami-Dade County.

The Sun Sentinel first reported news of Book's arrest after a car rolled over on I-595 near Nob Hill Road. According to BSO's online records, Book was slapped with two charges: driving under the influence and damaging someone else's property. He also allegedly refused to take a Breathalyzer test. Book's bail was set at $1,500. He bonded out that night.

Notably, Book spends a great deal of time admonishing others — specifically the homeless — for similar conduct. He chairs Miami-Dade County's Homeless Trust, a position he holds despite having no background in social work, addiction therapy, or any other relevant social scientific study.

He routinely fights public programs designed to make life easier for the homeless. For example, Book once argued against the addition of more public bathrooms in Miami-Dade because in his view, making life "easier" for the homeless makes it harder for the county to reform them.

Book also drew criticism in 2017 for encouraging the arrest of homeless people as a way to give them "shelter" during Hurricane Irma. He also became nationally known as the lobbyist who put sex offenders under a bridge after New Times discovered that sex-offender-residency laws he championed forced a group of Miami's homeless sex offenders to live beneath the Julia Tuttle Causeway.

It's unlikely that Book's arrest will affect his numerous Florida lobbying gigs. This is not his first run-in with the law: In 1986, he was charged with insurance fraud after he allegedly overstated by $10,000 the value of a car that had allegedly been stolen. Book pleaded no contest to a misdemeanor and received no prison time.

Book then launched a volley of illegal political donations to local and state candidates. New Times columnist Jim DeFede wrote in 1995: "Having been scandalized in the Eighties, barely escaping the decade without a criminal conviction, and knowing that police and prosecutors were just waiting for him to trip up again, Ron Book chose to blatantly violate state law by funneling more than $30,000 in illegal campaign contributions to at least a dozen of his political cronies in state and county government. He did this not in a single campaign season, but year after year, over and over again."

He pleaded guilty to four misdemeanor charges, paid a $2,000 fine, and agreed to donate $40,000 to charity. Book, a lawyer, narrowly avoided being disbarred.

In the years since, he's become a lobbyist for Boca Raton's GEO Group, a private company that turns a profit from the arrest and incarceration of others.
KEEP MIAMI NEW TIMES FREE... Since we started Miami New Times, it has been defined as the free, independent voice of Miami, and we'd like to keep it that way. With local media under siege, it's more important than ever for us to rally support behind funding our local journalism. You can help by participating in our "I Support" program, allowing us to keep offering readers access to our incisive coverage of local news, food and culture with no paywalls.
Make a one-time donation today for as little as $1.