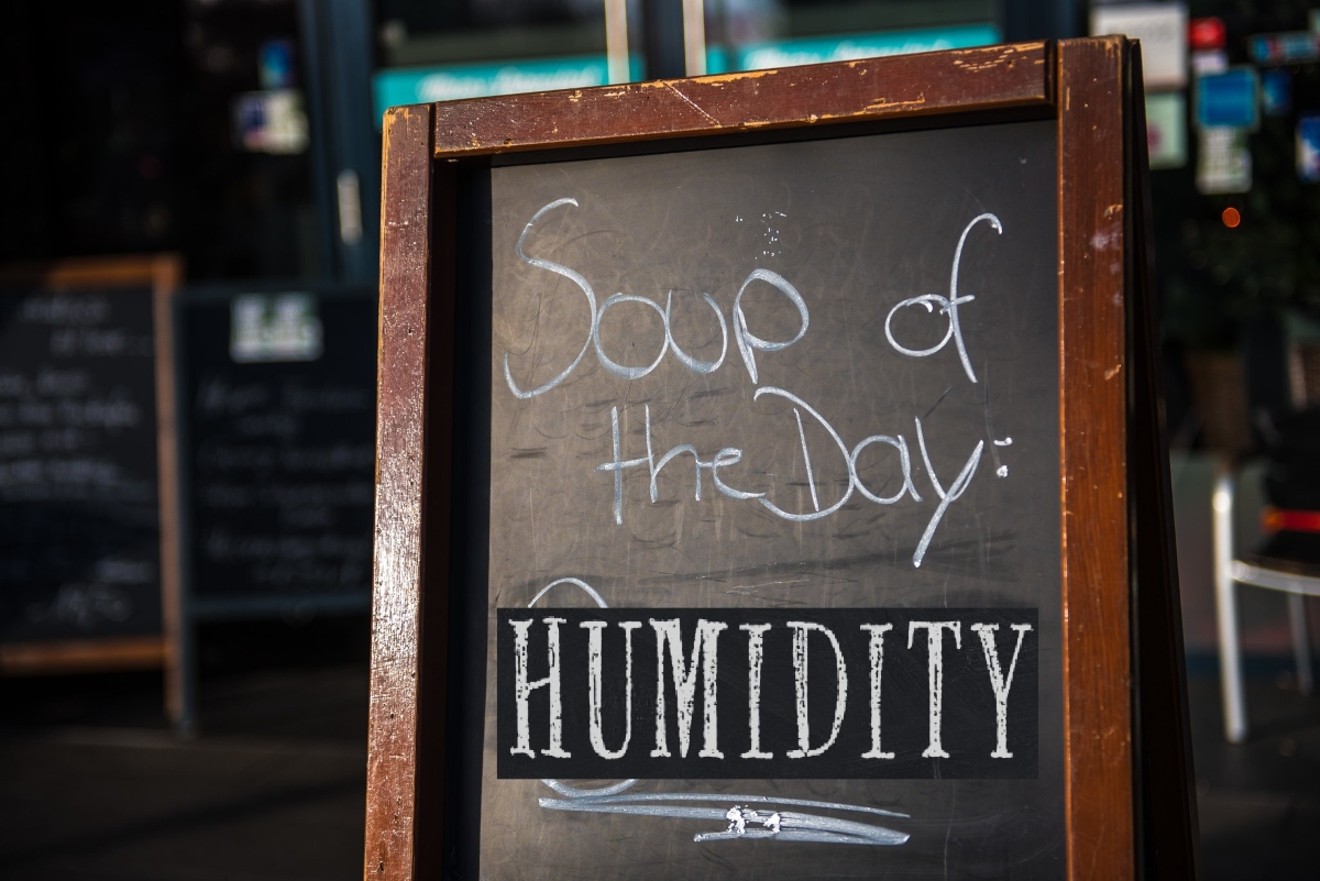 Graphic design is my passion. Photo by Christian Kothe/Flickr, graphic by Jessica Lipscomb
If you spent the past few days feeling like you were swimming through Miami's notoriously brutal humidity, you're not wrong. Although summer technically began on Sunday, temperatures in Miami are already breaking records, signaling that this could be one of the swampiest summers in years.

According to University of Miami meteorologist Brian McNoldy, on Sunday the heat index in Miami reached 108 degrees — the highest it's been since August 2015. (The heat index takes into account not only the actual temperature but also the level of humidity.)

"This is some SERIOUS and oppressive heat," McNoldy tweeted. "The old record for today was 104° and the all-time highest heat index on record here is 110.4° to put it in perspective."


#Miami reached an incredible 108° heat index on Sunday, the highest measured since August 2015!! This is some SERIOUS and oppressive heat. (The old record for today was 104° and the all-time highest heat index on record here is 110.4° to put it in perspective.) #FLwx #HEATWAVE pic.twitter.com/Q5YVQaIY53

Incredibly, that wasn't the only record-setting weather pattern Sunday: McNoldy also pointed out that the dew point — a term used to describe the amount of humidity in the air and basically how comfortable it is to be outside — reached 80 degrees in Miami, breaking the previous record for June 20 by one degree.


#Miami has reached an 80°F dewpoint twice already today, which breaks the old record high dewpoint for the date by 1°F. This is some epic swampiness. @UMiamiRSMAS @capitalweather @JohnMoralesNBC6

Yesterday got so hot that the National Weather Service issued a hazardous weather outlook for South Florida, warning that the forecast called for a heat index between 105 and 107 degrees.

The heat wave coincided with yesterday's Show Your Stripes Day, a campaign to raise awareness about global warming. The annual event, started by British climate scientist Ed Hawkins, uses a striped graphic to help people visualize how much hotter cities have gotten in recent years. Blue stripes indicate years that were cooler than average, while red stripes indicate years with above-average temperatures.

In Miami, for example, the so-called #ClimateStripes graphic shows alternating stripes throughout much of the 1900s, while the past few decades are almost all red. The Cleo Institute, a Miami-based nonprofit advocating for action on climate change, tweeted the image to show just how hot the past few years have been compared to recent history:


Hey #Miami: First day of #summer & you are looking HOTTER as the years go by! Waaayyy HOT!#ClimateStripes #SummerSolstice2021
The stripes use annual temps anomalies:????stripes are yrs above a long-term avg temperature &????stripes are yrs below.#ClimateCrisis #ClimateActionNow pic.twitter.com/cfN7Tv0R3C

While most climate scientists believe temperatures will continue to rise in Miami for the foreseeable future, local governments are trying to plan ahead to reduce the impacts of ever-hotter summers that bleed into fall, winter, and spring. Earlier this year, Miami-Dade tapped its first "chief heat officer," Jane Gilbert, to spearhead policies that will make the county more resilient in the face of that reality.

In the meantime, crank that AC, baby!

We’ve reached Too Hot To Be Alive season in miami. Please no one speak to me directly, thanks!