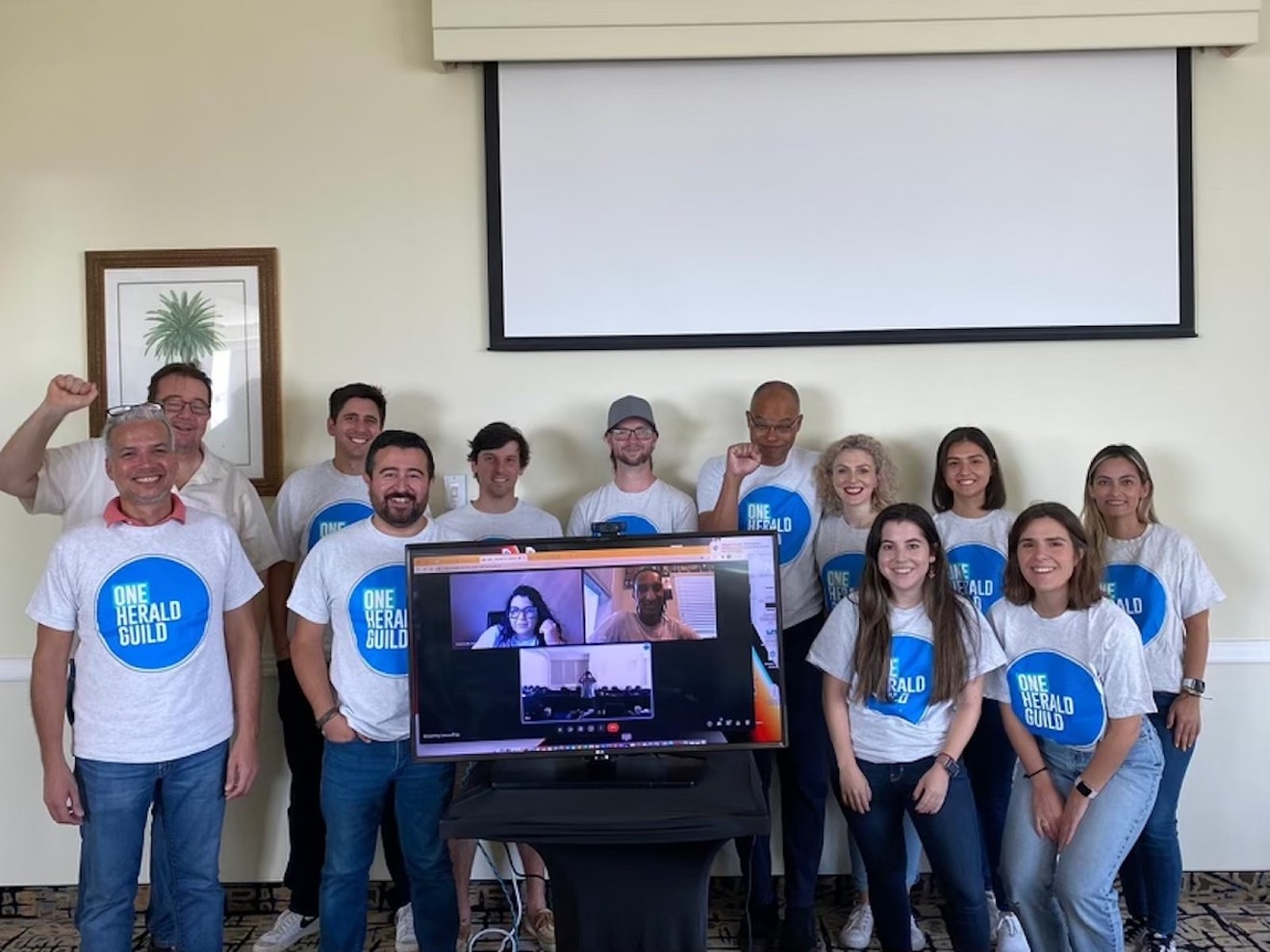 Frustrated journalists with Miami's paper of record are walking off their jobs today. Photo courtesy of One Herald Guild
Miami Herald and El Nuevo Herald journalists have been bargaining for a union contract with parent company McClatchy for more than two years, and after stalls in negotiations, they're walking out and refusing to work today.

Of course, it won't be a literal "walkout," more like a symbolic closing of the laptop, since the newsroom went fully remote in the summer of 2020 after the Herald gave up the lease at its Doral newsroom owing to budget constraints amid the pandemic.

It's unclear how this 24-hour stoppage at Miami's paper of record will affect the reporting of today's news — a day notorious for hoaxes and pranks — and publishing the print newspaper. So far, at least five articles have been posted on the Miami Herald and Nuevo Herald sites since the 24-hour work stoppage went into effect at midnight.

"It's not like we're sitting here on the pool deck drinking margaritas," Dan Chang, a health care reporter and union bargaining chair, tells New Times. "It's not like we want to walk out, it's hard to not call sources back, to not follow the things that you're passionate about."

During the walkout today, members of the One Herald Guild, which represents the Miami Herald, El Nuevo Herald, and Bradenton Herald newsrooms, are gathering at the Holiday Inn on Biscayne Boulevard in downtown Miami to speak to McClatchy and their lawyers after months of stalling in the negotiation process. According to the union, McClatchy has refused to address the introduction of paid parental leave, pay disparities between English and Spanish-language journalists, and continues to underpay colleagues who have dedicated years to the Herald. Other demands include experience-based salary floors, protections against outsourcing, and higher gas mileage reimbursement. (While their current rate is 33 cents per mile, the IRS standard mileage rate is 58.5 cents per mile.)

"We're working to get ourselves a contract that we can all be proud of," Chang says.

One of the union members' main demands has been pay equality. According to Poynter, some journalists at El Nuevo Herald make $10,000 to $20,000 less than their peers at the Miami Herald, despite having more experience.

Herald food editor Carlos Frías wrote on Twitter that he and his colleagues have made a number of compromises to do their job.

"Pay cuts. Denied raises and even cost of living adjustments. Watching young colleagues have to work as Uber Eats drivers as a side hustle," Frías wrote. "Enough is enough."


It's not an easy decision. We've all made compromises to work these jobs because we love covering our city. Pay cuts. Denied raises and even cost of living adjustments. Watching young colleagues have to work as Uber Eats drivers as a side hustle. Enough is enough.

McClatchy did not immediately respond to New Times' request for comment via email. After filing for Chapter 11 bankruptcy, the family-owned chain was purchased by hedge fund Chatham Assessment Management in July 2020.

According to CJR, nine of the 30 daily newsrooms McClatchy operates across the country are unionized. Poynter reports that One Herald Guild is the largest union within the chain.

Chang clarifies that this isn't a paid day off for the union members walking out — none of them are using personal, sick, or vacation days.

"We're doing this because we want a contract, and we feel like it's time, and we want to show the company that we're unified," Chang says. "And that we wanna get back to work, too."
KEEP MIAMI NEW TIMES FREE... Since we started Miami New Times, it has been defined as the free, independent voice of Miami, and we'd like to keep it that way. With local media under siege, it's more important than ever for us to rally support behind funding our local journalism. You can help by participating in our "I Support" program, allowing us to keep offering readers access to our incisive coverage of local news, food and culture with no paywalls.
Make a one-time donation today for as little as $1.