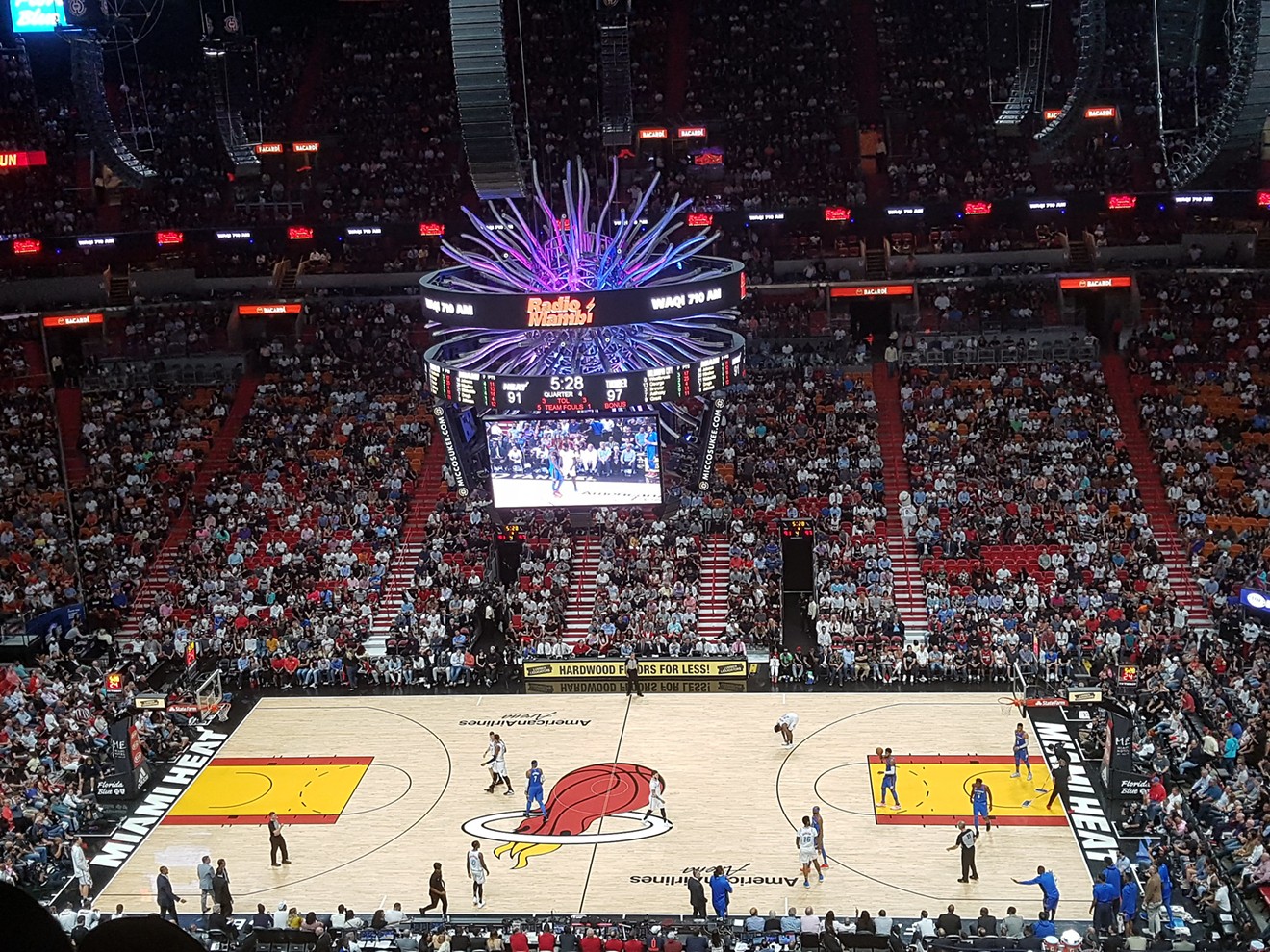 Seeing the Heat pop up on our social media timelines has brought a smile to our faces more than once. Photo by Guillaume Capron / Flickr
It's been a long time since we've seen the Miami Heat on the floor — more than seven weeks, in fact. One glimmer of interest among the boredom imposed by this period of isolation: seeing celebrities and pro athletes living a life not too dissimilar to everyone else's. Sure, they're quarantining in mansions equipped with home theater and having fresh-cut fruit delivered daily with no real financial worries on the horizon, but they've got the same Netflix and ESPN we do and Prime 112's dining room is just as closed as Panera's.

For fans, watching our beloved Miami Heat stars ride out this unthinkable tragedy right along with us has not only been entertaining but also endearing. In a way, it has actually made us feel even closer to them.

This week the NBA announced that some teams can begin practicing again as soon as May 8. When that happens, Miamians will have a newfound appreciation for their home team. Here are some reasons this quarantine has made us love the Miami Heat even more than we already did.


A must watch for @MiamiHEAT fans as we hit the final moments of our #HEATRewind replay of the deciding game in 2006 #NBA Finals.

Pat Riley recalls every second in detail coming out of the crucial last time out. From the X's and O's to the emotions with @EReidMiamiHEAT. pic.twitter.com/Jsha2tTrYH

The pause in action has made us all relive some great memories. In lieu of any new games to broadcast, we've been treated to rebroadcasts of tons of old games. For Heat fans, that includes a bunch of NBA Finals games. If you haven't heard, most of those have gone pretty well for our boys. Watching them again is OK by us, thank you.

Maybe the most fun part has been watching the players relive those moments. This past week, Heat president Pat Riley talked about how much it meant to him to win the title in Miami back in 2006. Speaking to Fox Sports Sun about his daughter finally being old enough to understand the moment actually drew some tears from the Heat's Godfather — something we've rarely seen in his nearly three decades with the team.

Heat center Meyers Leonard continues his streak of being awesome. We already knew Meyers Leonard and his wife, Elle, were incredible assets to the community. I mean, they have a tradition of skipping Christmas presents and adopting families at the Miami Cancer Institute instead. Outside of their important work in the community, though, they're a blast to follow on social media.

Over the past month, the Leonards have upped their game. By playing video games and dyeing his hair to raise money, Meyers has found a variety of ways to make a difference. It makes you proud to say he plays for the Miami Heat.

Bam Adebayo's mood thread. Sometimes words aren't needed. Heat center Bam Adebayo is going on his 50th entry in a thread that simply announces his current mood. Most are predictably related to being bored. Some pertain to losing his mind. Others have an apparent meaning only Bam understands. Whatever the case, we're here for the laughs at the all-star center's bored-ass expense.

Watch Carlos Arroyo and a few fans nail our #MyHouseChallenge on TikTok. pic.twitter.com/1StMpTLkJ5

The Miami Heat has fans re-enacting moments at home. It feels like we've all been locked up inside forever. We need more things to do.

The Miami Heat is here to help. The team recently started asking fans to re-create famous moments — including the incredible Dwyane Wade buzzer-beater against the Chicago Bulls where his signature "This is my house!" battle cry was born.

Anyone with a basketball hoop and a phone can enter, and the submissions have been fun to take in. Good on the Heat's social-media team for getting creative in the name of staying home.


Dwyane Wade told Norris Cole if you make that shot from half court I’ll give you the keys to my Porsche ???????? @pg30_Cole @DwyaneWade #theplatformbasketballpodcast pic.twitter.com/BxVTExNYvm

Quarantine and chill has brought some stories out of the woodwork. Quarantine and drinking go hand in hand. We're all at home, so why the hell not? Anyone can tell you that once a bottle of wine is uncorked, funny stories start to come out. Recently on Dwyane Wade's Instagram account, we all were treated to further proof. Former Heat point guard Norris Cole joined Wade and told a story about the time Wade challenged him to make a half-court shot. If he made it, the prize was Wade's new Porsche.

Cole made it. Wade had to make a phone call. As soon as the team arrived back home in Miami, the sports car belonged to Cole.

Jimmy Butler was not going to let his teammates get rusty while quarantined. Once it became clear the NBA would be on hold for a while, fans began questioning where Heat players were going to get up some shots. As it turns out, none of the players has a court at home, and only Goran Dragic had his own hoop.

Jimmy Butler fixed that. He sent everyone a basketball hoop so they could keep their strokes nice while staying home. The knock on Butler before he arrived in Miami was that he was a terrible teammate. Since he's been here, he's proven to be the opposite.


We wanna see how you #HEATFromHome.

The Heat has done more than play old games during this crisis. We're all starved for sports content right now, and the Miami Heat has been delivering on social media the best it can. The team has been posting photos and videos of players at home and overall keeping in touch with the fanbase in a fun way.

The little things — they've been a breath of fresh air while we wait this thing out. Seeing the Heat pop up on our timelines has brought a smile to our faces more than once.


The @Marlins and @MiamiHEAT have teamed up with suppliers and seamstresses to turn some of their apparel into masks. #COVID19 #PPE https://t.co/HvHrAOWWQ1

Amid a PPE shortage, the team started making masks. This one's self-explanatory: The Miami Heat saw an issue in the community and quickly decided to chip in. The Heat and Marlins both decided to turn old jerseys and apparel into protective masks. Amid a supply shortage, the masks went out to the healthcare facilities and people who needed them most.

Not much else to say here. The Heat went out of its way to do what it could, even if it was far outside its expertise. The team could have done nothing, but it did something.

We're getting a look into the homes of our favorite players and coaches. One of the most satisfying things throughout this pause in the NBA season has been seeing how our favorite players and coaches live at home. We've been able to see coach Erik Spoelstra's new baby and two little boys. And watching a guy like Goran Dragic jump into the pool with his family just makes you feel like you'll know him a little better when he takes the court again. That there is a bright spot.


You can only choose 3...#FLASHbackFriday pic.twitter.com/waQnyhVGiR

March and April without the Miami Heat seems wrong. They say you don't miss a good thing until it's gone. In this case, we can definitely say finding out what March and April are like without the Miami Heat qualifies. Even when the Heat misses the playoffs, the team is at least on our televisions fighting for wins this time of year. We're not even getting frustrating losses right now.

We miss seeing the Miami Heat win games. We even miss seeing them lose games. We miss it all. This time in quarantine has made Heat fans realize just how much basketball is a part of their lives. And we can't wait to see it return.
KEEP MIAMI NEW TIMES FREE... Since we started Miami New Times, it has been defined as the free, independent voice of Miami, and we'd like to keep it that way. With local media under siege, it's more important than ever for us to rally support behind funding our local journalism. You can help by participating in our "I Support" program, allowing us to keep offering readers access to our incisive coverage of local news, food and culture with no paywalls.
Make a one-time donation today for as little as $1.