"The Rent Is Too Damn High": Miami-Dade Residents Will Rally to Protest Rent Hikes 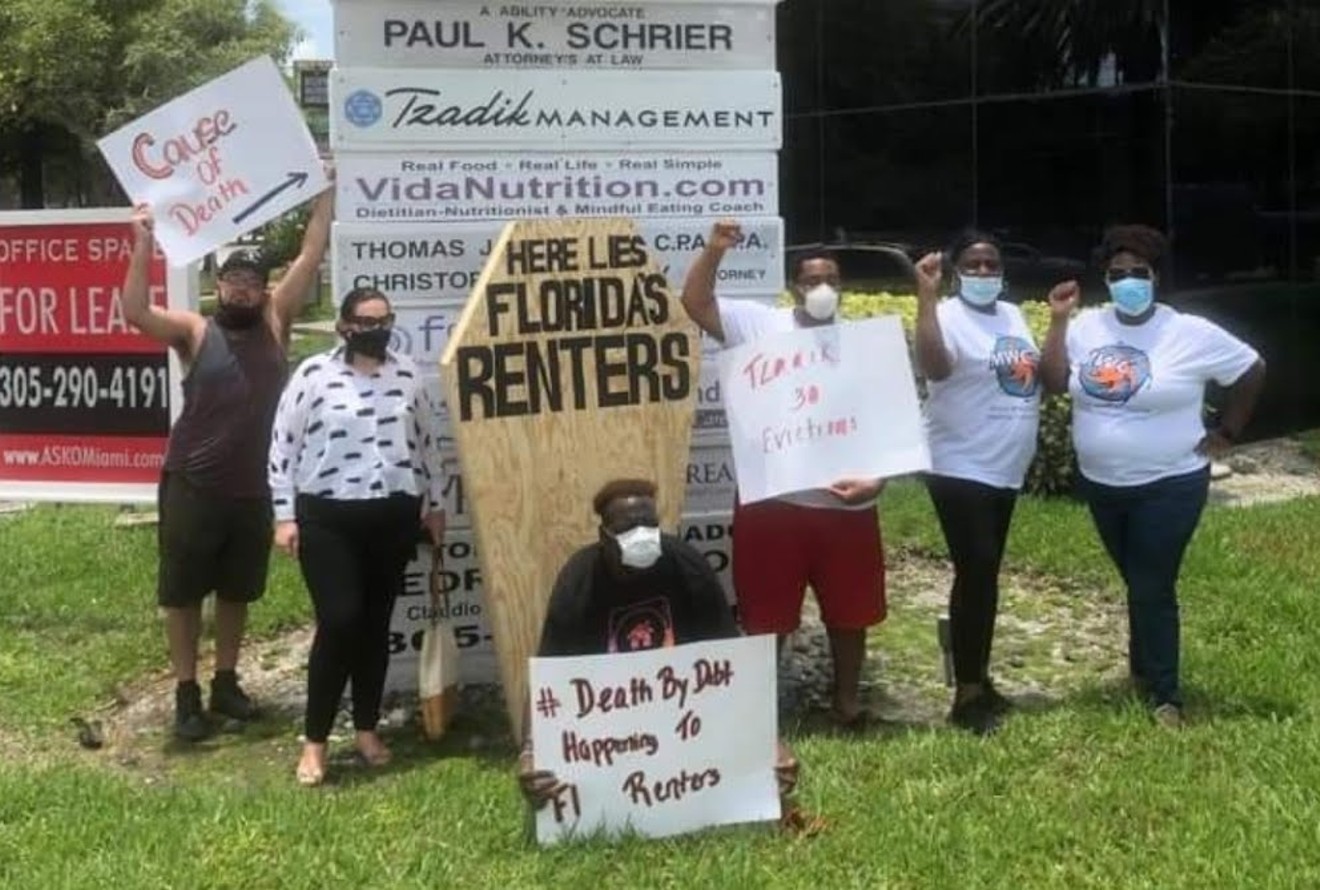 Renters at a previous protest in Miami-Dade Photo courtesy of SMASH
It's not just a meme any more: The rent in Miami-Dade is too damn high — and residents are doing something about it.

At 9 a.m. on Tuesday, March 15, county residents will meet for a "The Rent Is Too Damn High" rally outside the Stephen P. Clark Government Center in downtown Miami, where the Miami-Dade Board of County Commissioners will assemble for a scheduled commission meeting at 9:30. The rally is being organized by a coalition of community advocacy groups, including Struggle for Miami's Affordable and Sustainable Housing (SMASH), Miami Climate Alliance, and Urban Health Partnerships.

According to the event flyer, the event is "a rally against rent increases, homelessness, gentrification and the terrible housing policies that plague Miami."

Miami renters are already considered the most rent-burdened in the nation. But this year, locals experienced an estimated 34 percent increase in rents year-over-year as transplants from places with higher costs of living, including New York City and San Francisco, moved to Miami-Dade during the pandemic.

Earlier this year, tenants at a Hialeah apartment complex were given less than a month to come up with an additional $600 tacked onto their $1,000-a-month rent. The Miami Workers Center told the Miami Herald of $800-a-month apartments in Liberty City suddenly jumping to $1,700 and $500-a-month efficiencies in Little Haiti charging $900.

The sudden spikes have left residents like Nelida Jean-Baptise Pellot displaced from the places where they've lived for decades.

"A few months ago, the room I was renting burned down, and when I went to look for a new apartment, I couldn't afford anything," Jean-Baptise Pellot tells New Times. "I've lived in Miami for more than 20 years, but now I had to move to Vero Beach."

Jean-Baptiste Pellot sits on the board of directors for one of the groups leading the rally later this month: SMASH, a nonprofit that advocates for affordable and equitable housing. The rally will highlight stories of people who have been displaced or made homeless by rising rents. Afterward, demonstrators will enter the government chambers to speak to commissioners about their rent hikes and advocate for legal action to protect residents from being forced out of their homes.

"When you share a person's face and story, now you see it's not just a rent crisis, it's Juanita's rent crisis," Jean-Baptiste Pellot says.

Commissioners are considering two ordinances to mitigate the rent crisis: One would require landlords to give at the very least 60 days' notice in the event of a 5 percent rent increase at the end of a lease or for people without fixed leases; the other would create the Miami-Dade County Tenant Bill of Rights, which would establish "unlawful practices" and "enforcement procedures."

The City of Miami Beach enacted a similar ordinance last month that would require landlords to give 60 days' notice if they were going to raise rents by 5 percent or more.

The city of Hialeah is using federal coronavirus relief funds to help tenants whose rents were raised during the pandemic (the money can only be used toward rent, and only to cover the difference between a tenant's original rent and the new rate). On February 22, the city council voted unanimously in favor of a proposed ordinance that would require landlords to give tenants 60 days' notice if they were going to raise rents by more than 10 percent. It's expected to pass on the second reading on Tuesday, March 8.

At a virtual rally on Saturday, March 5, tenants will share their stories and testimonials on social media with the hashtags #RentTooDamnHigh and #CantAffordMiami. Jean-Baptiste Pellot says residents can send SMASH one-minute videos detailing their rental crisis story.
click to enlarge Protesters will gather outside the Stephen P. Clark Government Center on March 15 to advocate for an end to unsustainable rent hikes in Miami.
Screenshot courtesy of SMASH Miami
KEEP MIAMI NEW TIMES FREE... Since we started Miami New Times, it has been defined as the free, independent voice of Miami, and we'd like to keep it that way. With local media under siege, it's more important than ever for us to rally support behind funding our local journalism. You can help by participating in our "I Support" program, allowing us to keep offering readers access to our incisive coverage of local news, food and culture with no paywalls.
Make a one-time donation today for as little as $1.