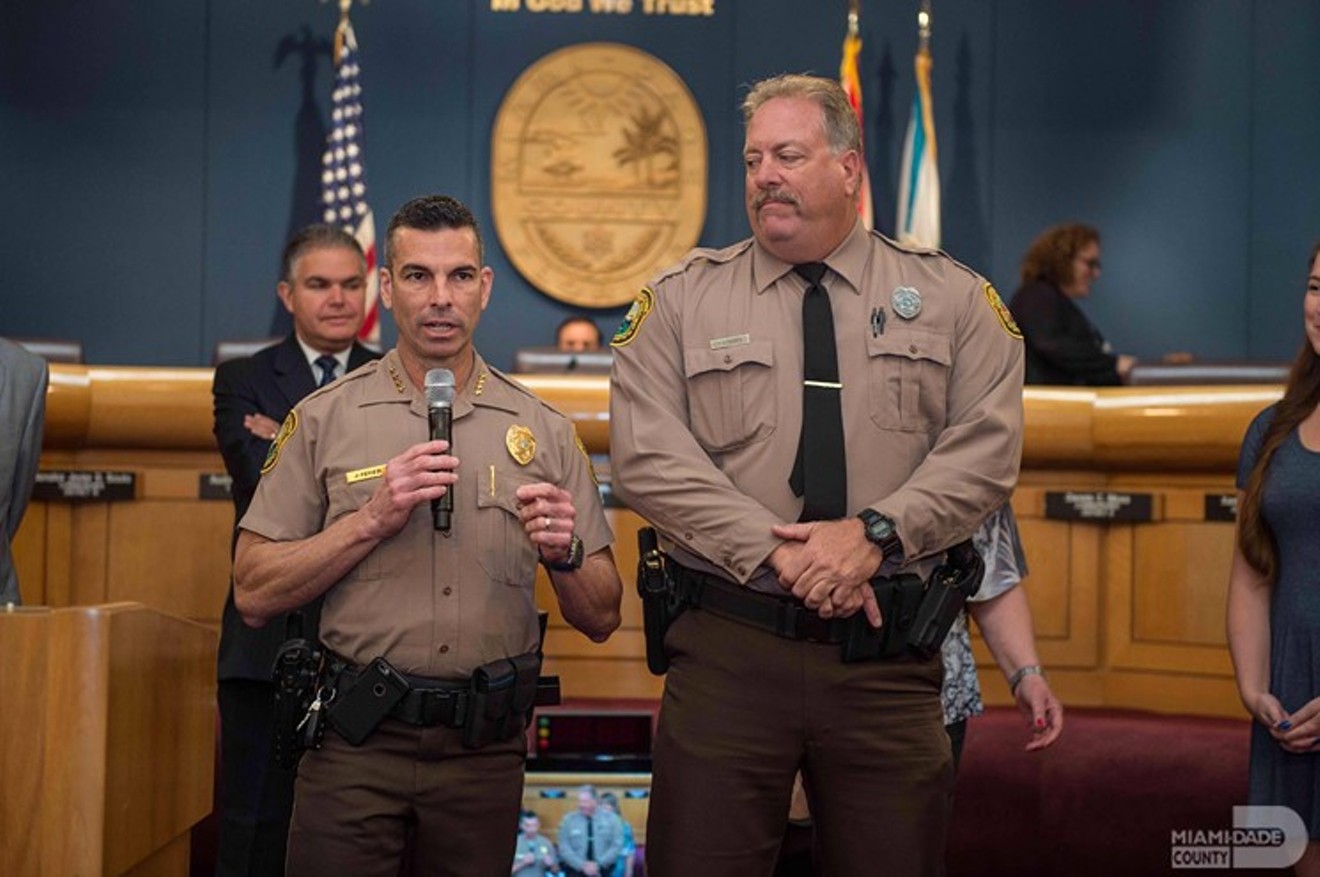 Miami-Dade County Police Director Juan Perez (left) Miami-Dade Police
Although the Miami-Dade Police Department is the eighth-largest law enforcement agency in the country, a report issued earlier this month warns that county cops are woefully underprepared to deal with transgender people. In response, the police department has confirmed to New Times it is now revising and adding new trans-rights policies designed to better protect trans people and instruct cops to treat them with respect and fairness.

On May 7, the National Center for Transgender Equality issued a report detailing whether the 25 largest police forces in America have adequate trans rights policies. Unsurprisingly, most don't.

"As we make groundbreaking advancements towards transgender equality, many members of our communities continue to be affected by disproportionate contact with, and often by bias and abuse within, policing and the criminal justice system," the organization writes in its report. "Even though transgender people are more likely to be victims of violent crime than non-transgender people, over half (57%) of all [survey] respondents feel uncomfortable calling the police for help when they need it."

The study judged each department on the ease of accessing its LGBTQ policies and whether it teaches cops how to deal with members of the LGBTQ communities, to recognize nonbinary or gender-nonconforming individuals, to transport trans-identifying people, and to care for transgender people medically. None of the agencies surveyed mandates department-wide training on interactions with trans individuals, the rights group found. Some departments, including MDPD, still allow cops to use condoms as "evidence" of sex work, a practice officers could use to further stigmatize trans people.

Few agencies performed well, although those in San Francisco, D.C., and Philadelphia scored significantly better than Miami-Dade. The MDPD currently has no policies that prohibit cops from detaining someone solely on their gender identity. Further, the department mandates detainees be searched by someone of the "same sex," but doesn't specify how this applies to trans individuals. Cops are not taught how to properly record a person's gender identity on police forms. And MDPD policies don't explain how trans people are to be kept in temporary jails or receive medical treatment in lockup.

In response to inquiries from New Times, MDPD forwarded an email Police Director Juan Perez sent the center on May 17. In the letter, he promised to reform MDPD's trans rights policies.

"Please be assured that our Department is fully dedicated to its mission of serving and protecting all Miami-Dade County's residents and visitors," Perez wrote. "In this regard, the Department is presently revising its policies and developing new policies to address both police interactions with the transgender community and transgender and gender-nonconforming employees. In an effort to learn and grow, the Department will carefully review the National Center for Transgender Equality's full report and use its model policy as a guide to revise, as necessary, our draft policies. We welcome the opportunity to contact LGBTQ leaders and advocates, and specifically your organization, as we go through this process."

The center also whacked Miami-Dade County for cooperating with Immigration and Customs Enforcement and failing to run an independent community-review panel for police complaints — two decisions made by County Mayor Carlos Gimenez.

News editor Jessica Lipscomb contributed reporting.
KEEP MIAMI NEW TIMES FREE... Since we started Miami New Times, it has been defined as the free, independent voice of Miami, and we'd like to keep it that way. With local media under siege, it's more important than ever for us to rally support behind funding our local journalism. You can help by participating in our "I Support" program, allowing us to keep offering readers access to our incisive coverage of local news, food and culture with no paywalls.
Make a one-time donation today for as little as $1.