Courtesy of Jessica Cruz
For the better part of a year, a group of more than 50 residents in the Glenvar Heights area of Miami-Dade County say they've been trapped living next to off-campus dormitories and frat houses illegally housing trash-spewing, beer-chugging University of Miami students. As New Times reported last week, the predicament in which these residents find themselves bears an extremely striking resemblance to the 2014 Seth Rogen comedy Neighbors.

But those residents will be relieved to know the neighborhood's days as a hot spot for illegal dorms might be coming to a close: County Commissioner Xavier Suarez's office confirmed to New Times over the weekend that his office, Miami-Dade Police, and county code enforcement have been investigating the ring of properties for weeks, and a staffer in Suarez's office confirmed Monday that the county expects to close the case in the next few weeks.

Questions remain as to how the well-heeled family of property owners — the Del Rey clan — was able to build so many huge student-centered homes in single-family residential areas in the first place. The elder Del Reys — brothers Julio and Jorge — rose to prominence in the county for owning Executive Fantasy Hotels, a chain of sex-themed motels with rooms featuring kitschy, exotic decor such as Arabian- and forest-themed rooms.

But last week, Glenvar Heights resident Jessica Cruz told New Times that the Del Reys also rent out four houses near her home that more than 50 residents have protested by signing a petition. The neighbors have even hired a lawyer to demand the county take action and shut the houses down. Cruz provided photographs of a massive ten-bedroom, ten-bathroom property on SW 67th Avenues that show Miami-Dade Police shutting down raucous parties in the middle of the night, as well as images of rented yellow school buses full of college kids showing up to drink and tailgate during this year's University of Miami football game against Notre Dame.

"If I wanted to live among a bunch of frat boys, I’ll go ask UM if I can rent a room," Cruz told New Times last week. "It just becomes unsafe.”

She says the blocks near the party house are constantly strewn with garbage and random cars either parked the street or zooming at unsafe speeds through the neighborhood. She also provided photos that show Pi Kappa Phi fraternity materials hung about the home. 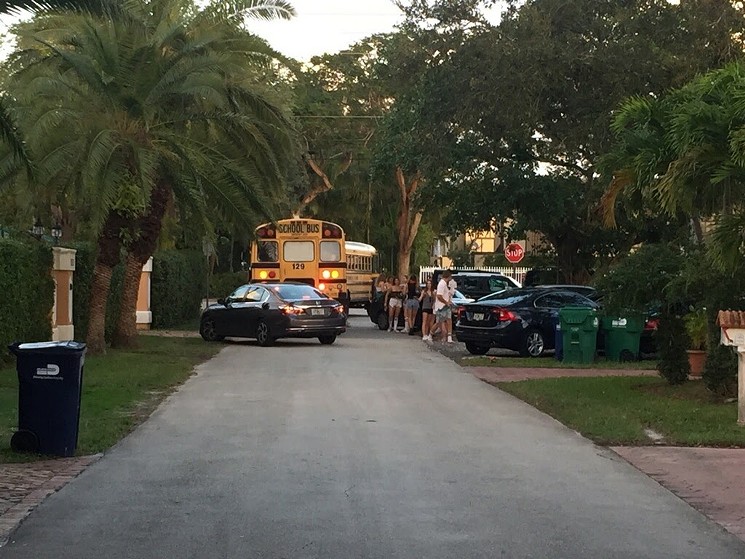 Courtesy of Jessica Cruz
She also says the homes are illegally zoned: County records show the houses in question are zoned "RU-1," a designation reserved for single-family homes. Renting to unrelated college kids is not allowed under the law.

Neither Julio nor Marcia Del Rey responded to New Times' requests for comment. But Cruz says she and her lawyer have sat down with the family and demanded the allegedly illegal renting stop. The neighbors say the family instead seems as if it plans to build more large homes — and Miami-Dade code enforcement may soon get involved.

After New Times published its initial story about the houses last week, the website Total Frat Move, a collection of the internet's worst, most entitled male creeps, published a hot take that bragged about how "cool" it is that a bunch of frat bros might be able to contact a local judge to help them get away with crimes!

"When you’re constantly dealing with law enforcement, having a judge to look out for you is an ace in the hole," wrote the anonymous TFM blogger "Doctor Franzia," named for the dirt-cheap wine popular among underage drinkers. "This is probably why even after repeated code violations, nobody’s gotten shut down yet."

Another discussion, on the r/Frat Reddit thread, included advice for other frat members considering renting "live-out" homes away from their respective campuses: Make sure you "try to find a house in the correct zoning," because "if you break the zoning code, its much easier for municipalities to get involved and evict you."