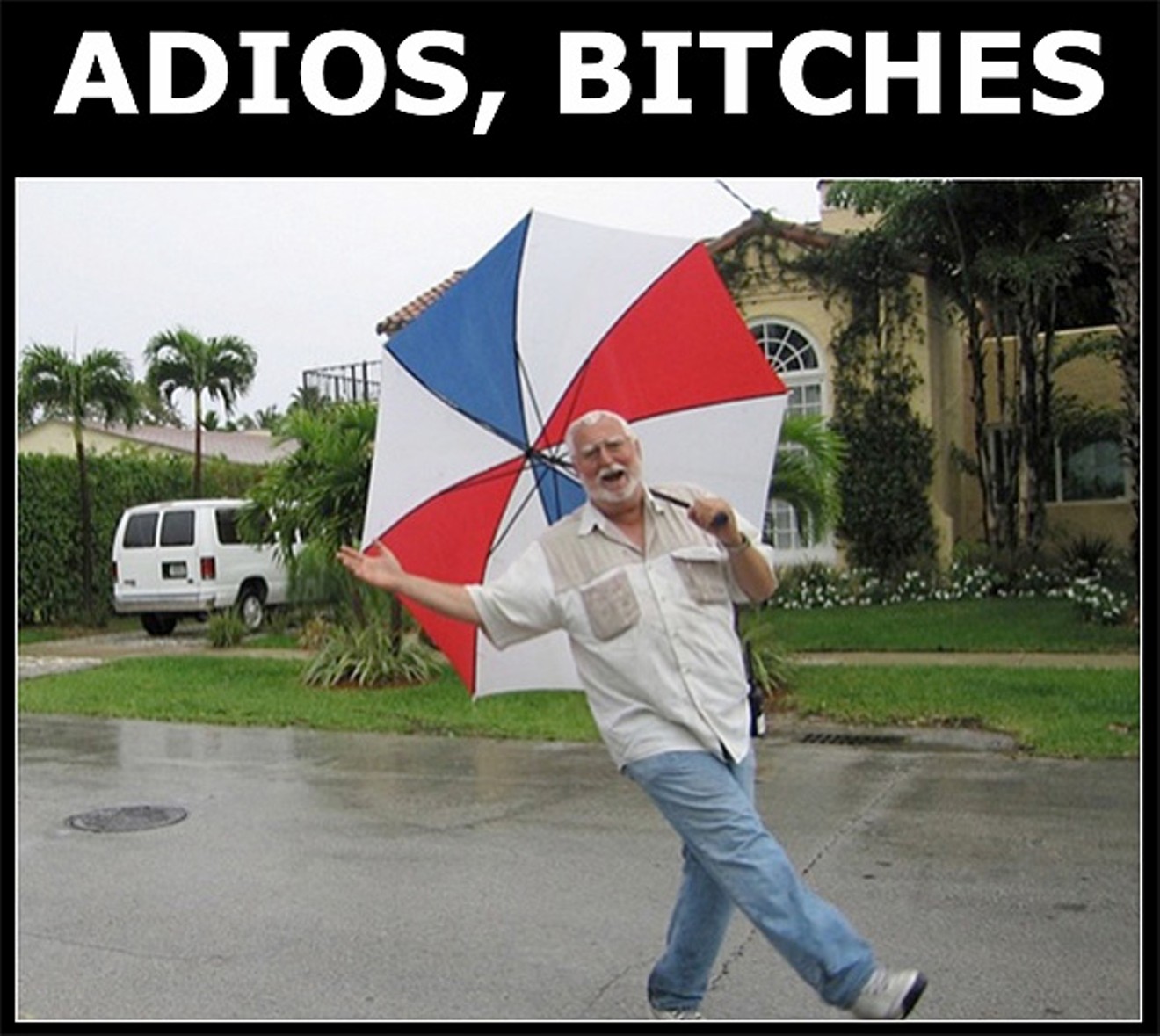 Al Crespo Photo courtesy of Al Crespo / Crespogram
It's the end of an era for Miami's political news scene. Al Crespo, the irreverent writer behind the Crespogram news blog, announced yesterday that he's stopped writing after a decade of breaking stories about public corruption and general douchebaggery in the Magic City.

Crespo took to Twitter yesterday and announced his departure to his nearly 6,000 followers. The accompanying photo included a play on his famous blog sign-off: "It's Miami, bitches!"

In a post elaborating on his announcement, the 78-year-old blogger wrote that he is retiring from writing to move on to new projects he hopes to accomplish before he's "too old" to do so.

A self-described ex-con and former film producer, Crespo never received professional journalism training, nor has he ever worked for a newspaper. But he has nevertheless been the first to write about some bombshell stories. His scoops include stories on former City of Miami mayor Tomás Regalado's alleged $400,000 bribe of then-Miami Police Department Chief Miguel Exposito in 2011, the theft of 11 revolvers from the police department in 2016, and the MPD's use of a rotting storage container under I-95 to store police evidence, also in 2016.

Crespo started his blog in April 2010, he tells New Times, while he was producing music videos, including one for the song "All I Want" by La Bouche. At the time, Regalado appointed Harry Emilio Gottlieb as director of the City of Miami Film Office, which handles permitting and logistics for professional film projects in the city. Crespo says his friends in the film industry would tell him horror stories about Gottlieb and his handling of the film office, so he decided to start writing about them in a blog.

His first story was about Gottlieb using the film office's official pool car for personal use.

"I had an Apple computer with a program called iWeb and I thought, 'Let me start this blog with stories about Harry.' I drove to his house, found the car, and took a picture. That was my first story," Crespo says.

After his first few stories about Gottlieb, Crespo says, people would come to him with information and documents about corruption and unethical activity in the city. He would often chase stories that weren't covered in mainstream outlets like the Miami Herald.

Crespo's story about Regalado's $400,000 bribe, however, gave him true legitimacy. He retrieved records that showed a $200,000 deduction from the city's general fund for a check addressed to Chief Exposito. The scheme, according to Crespo, was that Exposito was to be paid $400,000 in two installments in exchange for resigning from office. After Crespo blogged about the bribe, other news outlets seized on the story.

"At first I was just an ex-con, troublemaking loudmouth, but this gave me real credibility. I broke a story no one else could break," Crespo says today.

Crespo isn't shy about past. His first arrest was at age 17 for armed robbery. He says he robbed banks and jewelry stores from the late 1950s to the 1970s and served multiple prison stints before deciding change course in 1984, when he completed a 15-year sentence. He mounted an unsuccessful bid for the state house of representatives in Columbus, Ohio, and eventually moved back to South Florida in the '80s to care for his aging parents.

He says people will often throw his past in his face and distrust him because he was a convict. That lack of trust shaped how he goes about writing his blog posts.

"Given who I am and my past, I've never expected people to believe me. In order to convince you, I have to provide you with more than just a story," Crespo explains.

Crespo has a reputation in Miami, even among journalists, as a master at procuring public records. Most of his blog posts include PDFs of public documents, or video and sound clips, to support his writing. He says he goes the extra mile because people aren't likely to believe him otherwise.

"Finding documents is like following the money. Documents will tell you the story," he maintains. "The way I constructed my stories was based on documents or videos. I didn't just want you to believe me. I wanted to provide you with all the info to make your own opinion."

Now the devil-may-care writer is looking to go back to his old hobbies of filming and painting. He intends to take some time to write a Miami-centric TV show about the stories he's covered, in the style of the HBO series The Wire, and he speaks of visiting places he's never been, including Lagos, Nigeria.

The Crespogram website will remain up for about a year, Crespo says, until the domain expires. He says he's still getting news tips and there are stories he never got to write, but it's time to move on.

"I'm just a guy who had some skill in writing and an attitude and opinion," Crespo says. "I tried to do the right thing, even though some people didn't appreciate it."

It may still be Miami, but it's no longer the Crespogram, bitches.
KEEP MIAMI NEW TIMES FREE... Since we started Miami New Times, it has been defined as the free, independent voice of Miami, and we'd like to keep it that way. With local media under siege, it's more important than ever for us to rally support behind funding our local journalism. You can help by participating in our "I Support" program, allowing us to keep offering readers access to our incisive coverage of local news, food and culture with no paywalls.
Make a one-time donation today for as little as $1.