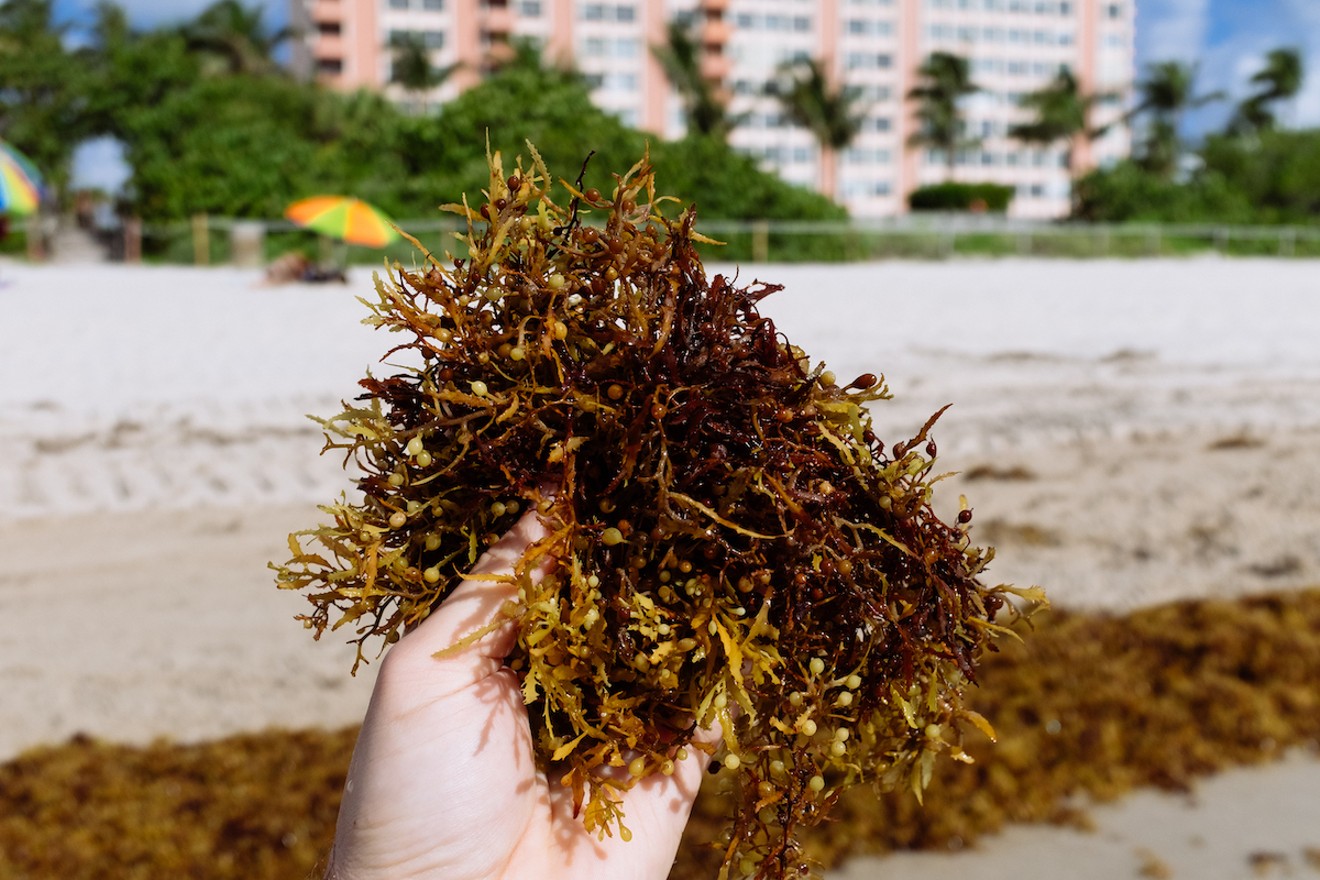 The latest on the stinky seaweed that has been clogging up Miami's beaches. John Peabody / Getty Images
Depending on the time and day, Miami's beaches can smell like several things: saltwater, weed smoke, or the sunblock-smeared flesh of scorched tourists.

And if the stench of rotten eggs is the shoreside odor of the hour, it's likely courtesy of sargassum seaweed, smelly, brown algae that has overwhelmed shorelines from Miami to the Caribbean in recent years. A July report from the University of South Florida's (USF) Optical Oceanography Lab found that in June, a record 24.2 million tons of the seaweed covered the Atlantic. And as first reported by Axios, Miami-Dade County beaches recently saw the highest levels of the pesky algae since 2019, when the county began closely tracking seaweed data.

But after months of sargassum stinking up Miami's beaches and spoiling the aesthetic that tourists seek out in droves, its levels appear to be subsiding — for now, at least.

"We are already in the decline phase," Dr. Chuanmin Hu, a professor of optical oceanography who coauthored the USF report, tells New Times. "Hopefully in the coming months, we will experience less, and by October or November, the amount should be minimum."


Over the past few weeks, you may have noticed a heavier influx of brownish sargassum (seaweed) along our shoreline. The city continues to coordinate with Miami-Dade County Parks to safely remove excess seaweed from our beaches.

Hu explains that while a moderate amount of sargassum in the ocean is good for fish and other marine animals — providing critical habitat for sea turtles, for example — too much is harmful.

Over the past decade, the seaweed has clogged Caribbean and South Florida shores, trapping turtle hatchlings and blocking sunlight from penetrating to coral reefs. Though more research is needed to pinpoint why sargassum blooms have rapidly intensified since 2013, Hu and other scientists have suggested that outflows of nutrients from the Amazon River, potentially exacerbated by deforestation and increased fertilizer use, are partly to blame.

In 2019, following years of complaints from residents, Miami-Dade County's Parks, Recreation and Open Spaces department began efforts to clean up decomposing sargassum, spending an estimated $45 million per year to remove mounds of the seaweed from a 15-mile stretch of county beaches. Cleanup crews currently operate on "a daily basis" to remove seaweed, which is then transported to a landfill or a designated staging area, where it dries and is recycled into fertilizer.

According to the Florida Department of Health, as sargassum decomposes, it emits a substance called hydrogen sulfide, which gives off that familiar rotten-egg smell and can irritate the airways of beachgoers, particularly those who have asthma. Although the seaweed itself isn't harmful, tiny sea creatures that live in it, such as jellyfish larvae, can cause skin rashes and blisters.

Hu emphasizes that while sargassum blooms have ecological impacts and prove to be a nuisance on the beach, they are not toxic to marine animals and humans the way that red tide is.

"So if you see sargassum in the water, there is no need to panic," Hu advises. "Just get away."
KEEP MIAMI NEW TIMES FREE... Since we started Miami New Times, it has been defined as the free, independent voice of Miami, and we'd like to keep it that way. With local media under siege, it's more important than ever for us to rally support behind funding our local journalism. You can help by participating in our "I Support" program, allowing us to keep offering readers access to our incisive coverage of local news, food and culture with no paywalls.
Make a one-time donation today for as little as $1.