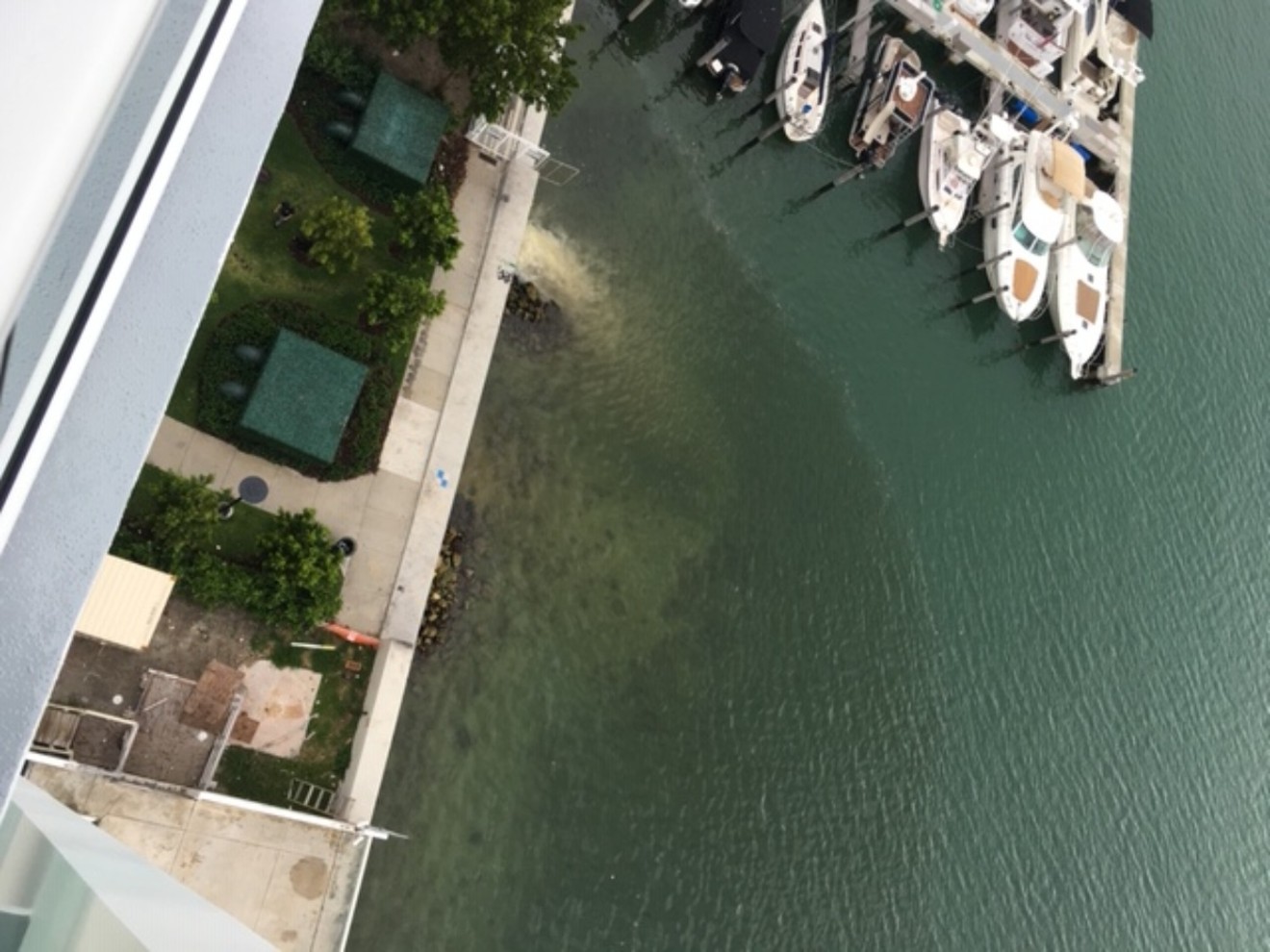 Stormwater outfall at West Avenue and Tenth Street in Miami Beach. Mike Alvarez
For years, environmentalists have complained the pumps Miami Beach uses to keep streets from flooding are polluting Biscayne Bay. Photos and videos from residents show plumes of dirty runoff being discharged into the water — and in one case, swallowed by a manatee.

Mike Alvarez, who served as both Miami Beach infrastructure and assistant public works director, says the problem is the design of the city's stormwater pumps. Although they filter out large pieces of trash, they pretty much expel water from the streets directly into the bay — depositing oil, dirt, debris, dog feces, pesticides, and other runoff into the water.

While Alvarez and activists have urged city officials to update the pump system, emails recently obtained by New Times show Miami-Dade's Department of Environmental Resources Management (DERM) is also concerned about Miami Beach's stormwater pumps. Following an April 25 meeting, DERM directed the city to "submit a design for a system that can meet County and State water quality criteria."

"DERM noted that the ...system is only intended to collect plastics and larger particulates and not bacteriological or nutrient inputs that impact water quality," county officials wrote. "This is an issue that requires immediate attention."
The emails are the clearest indication yet that Miami-Dade officials believe there's a problem with the stormwater pumps, which were supposed to be the legacy of former Miami Beach Mayor Philip Levine. The "action items" from the April meeting spell out that Miami Beach must submit plans to DERM showing how the city will stop sediment from being flushed out into the water. And DERM has given Miami Beach a four-page to-do list to improve water quality and pump operation, with a 45-day deadline for most tasks.

Lisa Spadafina, DERM's chief of natural resources, says in an email that the timeline for those items will begin after her office sends official correspondence to Miami Beach. (Miami Beach officials have previously told New Times that the city proactively cleans up its streets to stop potential sources of pollution from getting into the stormwater system.)

While Alvarez says he continues to meet with DERM every few weeks to discuss the problem, for now, he has stopped doing his favorite water activities near Miami Beach.

"I'm a boater. I'm a jet-skier. I do a lot of things in Biscayne Bay," he says. "Now I don't come over here, because I know it's more polluted than ever before."

Although DERM is finally taking action, Alvarez says the bay will continue to be polluted unless the pumps are redesigned.

"To me, DERM is not really putting the foot to the ground with Miami Beach," he says. "But Miami Beach continues to put in stormwater pump stations, and the water quality issue continues to be dirty water into Biscayne Bay."
KEEP MIAMI NEW TIMES FREE... Since we started Miami New Times, it has been defined as the free, independent voice of Miami, and we'd like to keep it that way. With local media under siege, it's more important than ever for us to rally support behind funding our local journalism. You can help by participating in our "I Support" program, allowing us to keep offering readers access to our incisive coverage of local news, food and culture with no paywalls.
Make a one-time donation today for as little as $1.