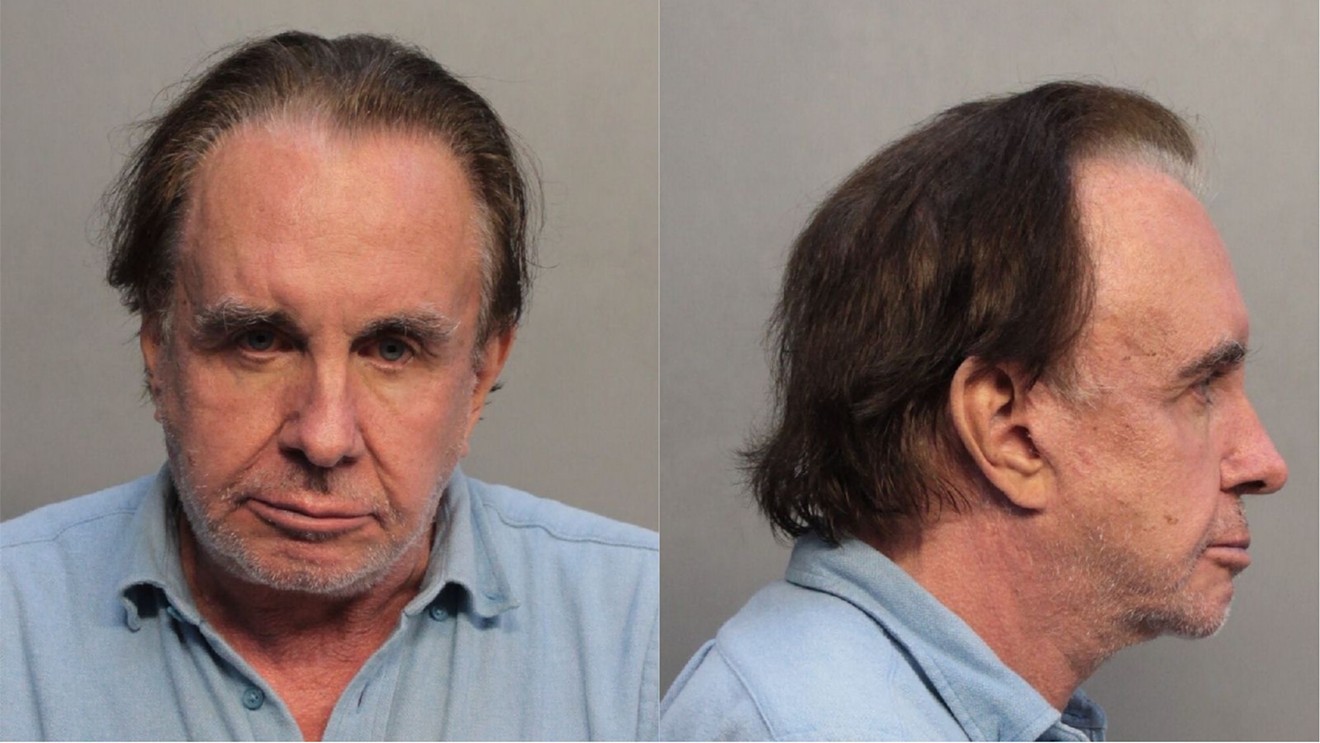 Miami-Dade County Corrections
A man with an apartment full of swastikas and Nazi memorabilia damn near blew up a Miami Beach condo building yesterday, according to Miami Beach Police, who say they arrived literally minutes before 72-year-old Walter Edward Stolper lit the Pavilion Residences at 5601 Collins Ave. on fire. Officers said they got there shortly before 4 p.m. yesterday to find that Stolper had already begun spraying gasoline around the building and had brought padlocks to lock down the building's fire hoses and ensure the place burnt to the ground with people inside.

"Our investigators eventually identified and then actually intercepted the suspect in the parking garage of the building," MBPD spokesperson Ernesto Rodriguez said in a news release, which CBS Miami first reported on earlier today. "At that moment, he was in possession of two gasoline containers. He had already dumped other containers with gasoline down a trash chute, and residents could smell the fumes of gasoline throughout the building."

Stolper's condo complex has apparently been trying to evict him for some time. His "motivation appears to have been a combination of anger at an upcoming eviction and anger toward fellow residents who are Jewish," MBPD says. Officers said in an arrest report that they were called to the scene after witnesses said they heard Stolper say he was going to burn down the building "with all of the fucking Jews." Officers wrote that Stolper had apparently "shown his anger" at his neighbors in the past.

A second witness told the cops Stolper had expressed a desire to "kill all Jews" and had told a neighbor he was going to pour gasoline down the building's garbage chute and light the place up.

Investigators say they confronted Stolper in the middle of his act. At 3:45 p.m., the cops say they found Stolper inside the parking lot with two gasoline containers in a shopping cart. (The cops say they smelled a strong odor of gasoline.) The cops then checked the garbage chute and found eight more gas cans.

"Gas had been poured down the garbage chute from the 15th floor down," the arrest form reads.

The officers then interviewed Stolper inside his apartment, where they say they found the black electrical fans. They also found "artifacts with swastikas and books of Nazi ideology." Despite the seemingly obvious nature of the attack, Stolper told the police he had "bought the gas to make a small barbecue."

He was arrested at 4 p.m. yesterday and charged with attempted first-degree arson. Beach PD at 4:43 p.m. today posted a clip of a storage locker they found containing 28 additional canisters of gasoline, plus sulfur powder and potassium nitrate. After the cops found those items, Stolper was charged with an additional count of attempted murder.

UPDATE: Detectives have located a storage room linked to the defendant. The room located within the same building contained 28 additional containers with gasoline, sulfur powder, and potassium nitrate. He has now been charged the with Attempted Murder. pic.twitter.com/9cXvNkWwiU


This is far from the first arrest of a neo-Nazi in Florida in the last few years. According to the FBI's latest data-dump in November 2017, hate crimes across Florida jumped 33 percent in 2016, hitting a then-four-year high. Last fall, the Anti-Defamation League warned that Floridians made up a comparatively large portion of Charlottesville "Unite the Right" rally attendees. In the last 14 months, a Cuban-American white nationalist was arrested last year for charging at a group of civil-rights protesters in Hollywood and trying to stab them with a flag; a Cutler Bay man with an affinity for the Confederate Flag was arrested for calling a bomb threat into a mosque; and a neo-Nazi former member of the National Guard was arrested in the Florida Keys while holding "radioactive material" he was allegedly trying to use to create a bomb.

The Southern Poverty Law Center warned in a February 2018 report titled "The Alt-Right Is Killing People" that white supremacists have murdered 43 people and injured more than 60 since 2014.

Miami Beach Police called yesterday's attempted attack an "imminent crisis that would have put many lives in jeopardy."
KEEP MIAMI NEW TIMES FREE... Since we started Miami New Times, it has been defined as the free, independent voice of Miami, and we'd like to keep it that way. With local media under siege, it's more important than ever for us to rally support behind funding our local journalism. You can help by participating in our "I Support" program, allowing us to keep offering readers access to our incisive coverage of local news, food and culture with no paywalls.
Make a one-time donation today for as little as $1.