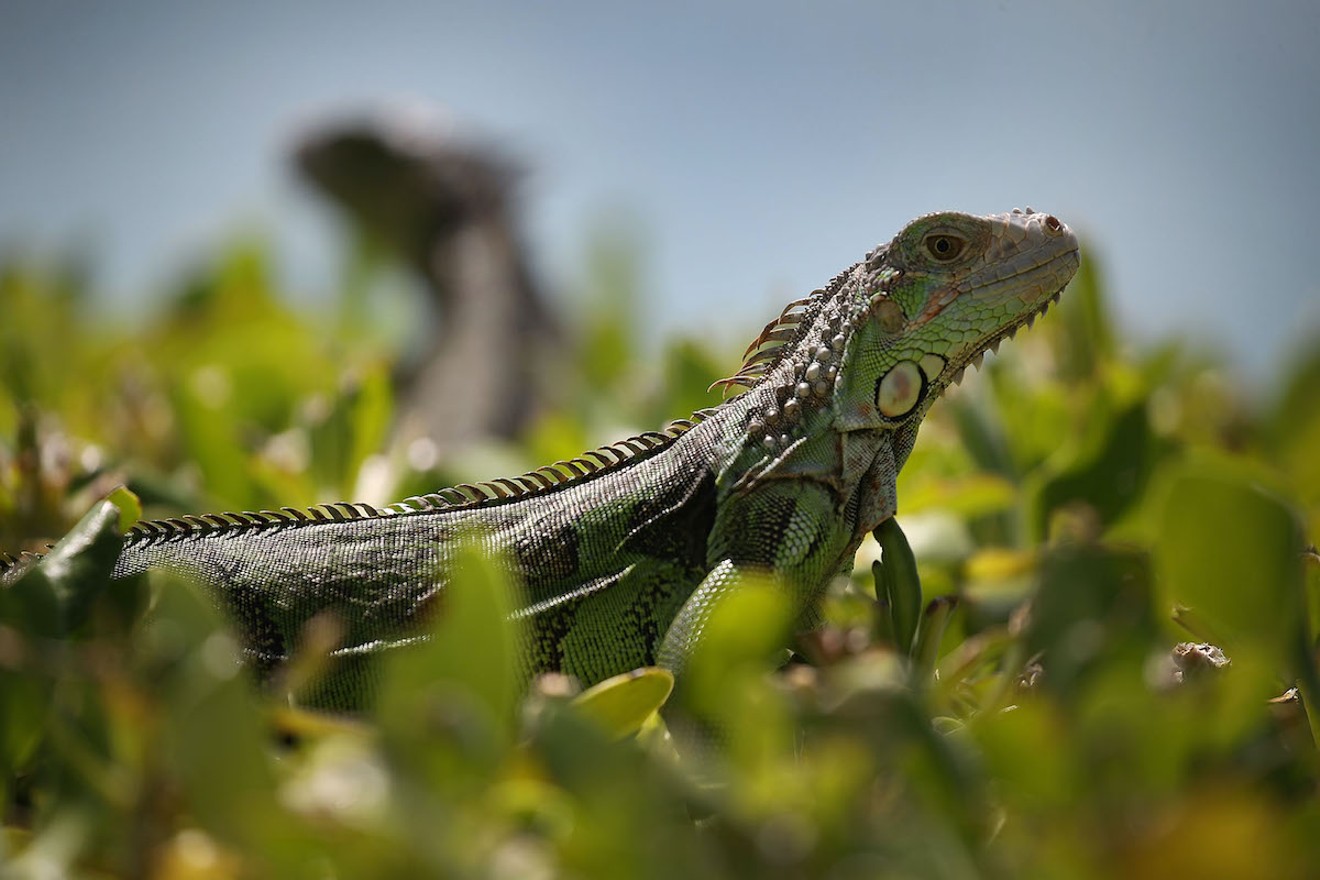 Iguanas aren't welcome in Miami Beach. Photo by Joe Raedle/Getty
Iguanas immobilized during last week's cold snap are in for a rude awakening. The City of Miami Beach has officially contracted a private removal service to hunt the reptiles in public parks across the island.

City Manager Jimmy Morales announced the decision in a recent letter to the mayor and members of the commission. The city has hired the Hollywood-based Redline Iguana Removal to try to stymie the rapidly growing iguana population in Miami Beach. The $75,000 contract, which began January 13, will expire at the end of September, according to city spokesperson Melissa Berthier.

Iguana populations have surged in South Florida since they were introduced to the area as exotic pets in the 1960s. Warm weather and a lack of natural predators have allowed the reptiles to proliferate, causing homeowners serious headaches. Iguanas can grow up to five feet long, and their droppings can spread diseases such as salmonella. The reptiles have been known to chomp on landscaping plants and damage sidewalks and seawalls by burrowing under them.

Miami Beach first experimented with using a termination service following some serious iguana drama in July 2019. That month, the Florida Fish and Wildlife Conservation Commission (FWC) declared open season on green iguanas, which are considered an invasive species, but then tempered its approach after complaints from animal advocates and an incident in which an iguana hunter in Boca Raton accidentally shot a pool boy in the leg. The agency has continued to encourage homeowners to kill iguanas on their own property or on public land without a permit, but only if they are capable of doing so safely — "this is not the Wild West," the FWC said.

Miami Beach decided to take on a more regulated approach. It launched a pilot program last summer with Redline to trap or snare iguanas in five locations: Muss Park, Pinetree Park, Brittany Bay Park, Scott Rakow Youth Center, and Flamingo Park. The pilot was successful — more than 200 iguanas were removed during the trial period — and the city decided to continue working with the company. According to Morales' letter, Redline has already captured more than 200 adult iguanas this year.

Animal advocates view the use of professional removal firms as an improvement over the wanton killing of iguanas by the general public, but they still worry some of those firms might not have the training and guidance needed to ensure the reptiles are euthanized appropriately. Iguanas are protected by Florida anti-cruelty laws and must be killed humanely, but FWC has yet to offer explicit directions on which methods of killing are humane and instead deferred to guidelines on euthanasia published by the American Veterinary Medical Association.

"Our concern is that these guidelines are written for veterinarians, not the general public or unregulated iguana hunters. They require personnel to be highly trained and skilled," says Lori Kettler, vice president and deputy general counsel of regulatory affairs for People for the Ethical Treatment of Animals (PETA). "Iguanas have the ability to suffer a great deal if they're not killed humanely."

Redline cofounder Perry Colato maintains that his company humanely kills every iguana it captures, but he would not reveal which methods are used to euthanize the reptiles.

"We follow all rules and regulations set by FWC. We keep in close contact with them throughout the process," Colato tells New Times.

Last year, PETA sent a letter to FWC condemning the agency's decision to allow the public to hunt iguanas and demanding the agency provide more details on humane methods of killing the reptiles. An FWC spokesperson told New Times there was an "ethical obligation to ensure iguanas and other nonnative species are killed in a humane manner that results in immediate loss of consciousness and destruction of the brain" but did not offer any approved methods.

As a public service, FWC keeps a list of wildlife trappers and hunters such as Redline Iguana Removal but lacks a certification process for any of the iguana hunters listed and does not exercise oversight of iguana removals.
KEEP MIAMI NEW TIMES FREE... Since we started Miami New Times, it has been defined as the free, independent voice of Miami, and we'd like to keep it that way. With local media under siege, it's more important than ever for us to rally support behind funding our local journalism. You can help by participating in our "I Support" program, allowing us to keep offering readers access to our incisive coverage of local news, food and culture with no paywalls.
Make a one-time donation today for as little as $1.