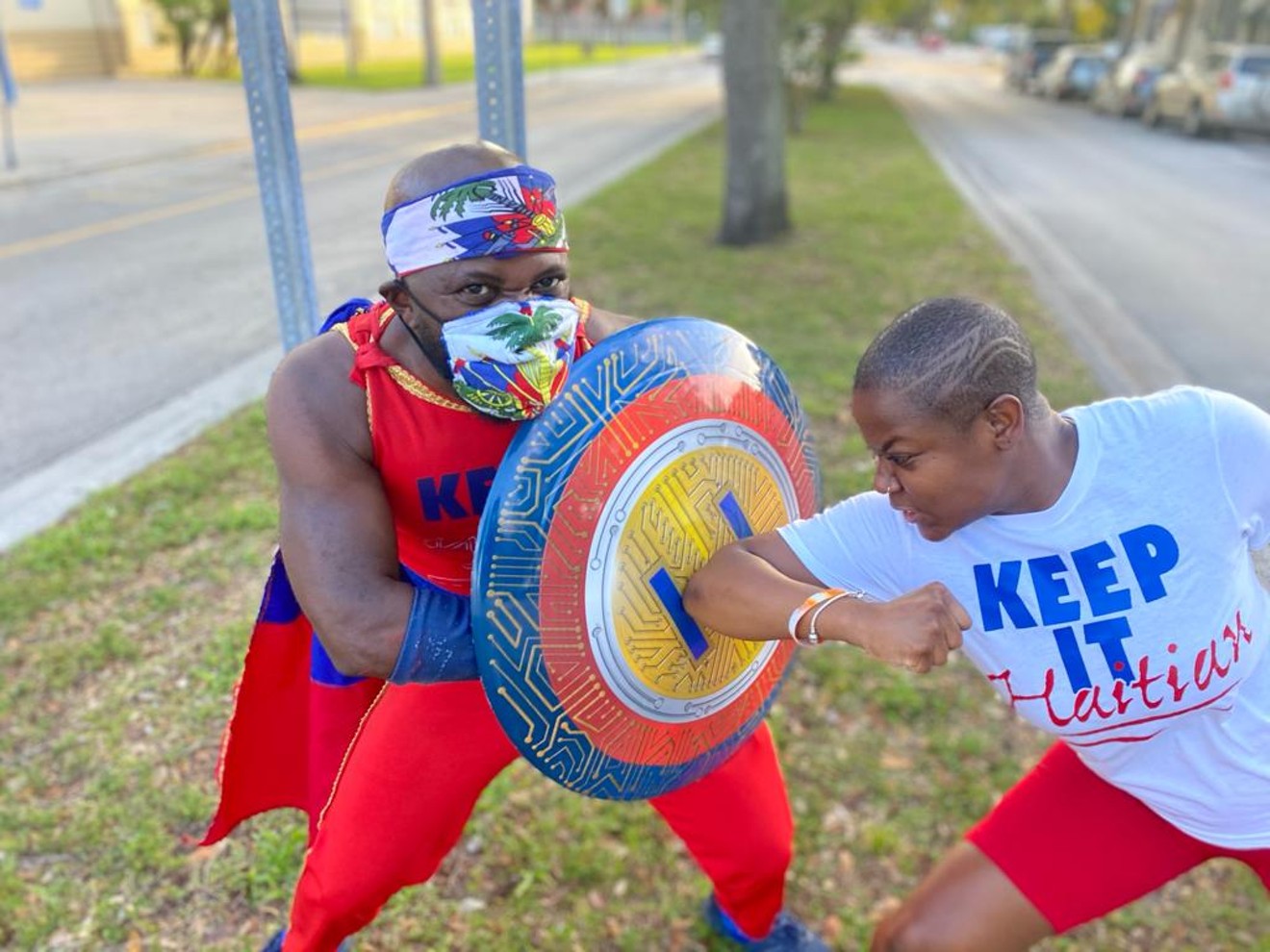 Captain Haiti is a Little Haiti superhero who wants to clean up the neighborhood using cryptocurrency. Photo courtesy of Nandy Martin
Little Haiti has its own superhero, and he's trying to help the community with an unlikely superpower: cryptocurrency.

Nandy Martin, who prefers to be known by his alter ego, Captain Haiti, has been a resident of Miami's Little Haiti neighborhood for the past five years. Easily recognizable when he walks or bikes down the street, Martin wears a cape, a red jumpsuit, and a circular shield adorned with the red and blue of the Haitian flag, in tribute to the Marvel Comics character Captain America.

"Everybody calls me Captain Haiti now, especially kids. But even my friends don't realize who's calling them unless I say, 'It's Captain Haiti,'" Martin says.

Martin is a Haitian-Canadian entrepreneur who's been looking for ways to promote Haitian businesses in Miami and to improve Little Haiti through economic development. He came up with the idea for the Captain Haiti character when he read about the growing spending power of Haitians in South Florida. When his young cousin talked to him about Captain America, he linked the two ideas to create a persona that would act as equal parts marketing tool and symbol for his vision of what Little Haiti could become.

"My superpower is to activate that spending power to benefit our community," Martin tells New Times.

Through his company, Keep It Haitian LLC, and its partner company, the Keeping It Haitian Vendors Association, Martin and other Little Haiti business owners are working to beautify the neighborhood and encourage local investment even as large-scale developments descend upon the area.

One tool in their utility belt is the $Little-Haiti-Coin, a cryptocurrency created by Keep it Haitian LLC that Martin calls a "social-economic cryptocurrency," meant to simultaneously fund beautification efforts and enrich local residents.

The price of one $Little-Haiti-Coin is currently $30. For each purchase of a coin on the currency's website, Martin and his partners — Ashley Toussaint and Jonathan Salomon, president and vice president of the Keeping It Haitian Vendors Association — will go out with volunteers to clean up one square foot of Little Haiti and, if desired, plant a flag with the name of the coin buyer's business at the site.

People can also earn a coin by volunteering to pick up trash and landscape the clean-up sites. And Martin says each Little Haiti resident will receive one coin free of charge.

There are only 1 million $Little-Haiti-Coins and about 96 million square feet encompassing the Little Haiti neighborhood. As more people buy up the currency, Martin says they'll have to sponsor more square footage to earn a whole coin. Cryptocurrencies can be purchased in fractional amounts, and a square foot of Little Haiti will only net fractions of a coin after a certain threshold of coins are sold. Martin hopes the scarcity of coins will add value to them, and, in turn, add value to the residents and the community.

With local politicians jockeying to make Miami the next cryptocurrency hub, Martin says he wants $Little-Haiti-Coin grab the attention of officials like Miami Mayor Francis Suarez and show them some positive uses of crypto at the community level.

"The goal is to let people know that Haitian-owned businesses do care about Little Haiti," Martin says.

Ashley Toussaint grew up in and around Little Haiti for much of his childhood. His father, Elisson, was a known figure in the community for decades as the owner of Toussaint Immigration Services, a business that helped Haitian migrants establish themselves in Miami. When his father fell ill in 2019, Toussaint moved back home from New York and took over the business. He saw a need for Haitian business owners to come together to protect the community from the effects of outside development.

"I saw gentrification in Brooklyn and the Bronx. When I came back, I saw those same patterns forming in Little Haiti. I know what comes with a quick land grab," Toussaint tells New Times.

Two major commercial and residential developments have their sights set on Little Haiti: the Magic City Innovation District and Eastside Ridge. The projects have promised urban revitalization, but some fear the large-scale developments and new businesses might push out the existing Haitian population.

Toussaint says that by getting local businesses involved with the vendors' association and preparing residents to take advantage of the new jobs, they can preserve the culture of the area and push back against invasive gentrification.

The Keeping It Haitian Vendors Association has advocated on behalf of local businesses, suggesting that the developers seek out businesses from Little Haiti for its contracts before looking elsewhere, a provision the Magic City developer added to its development agreement in 2019.

Toussaint says the association is also putting the finishing touches on a website it has launched called LittleHaitiJobs.Com, where real estate developers and new businesses can post job opportunities in the neighborhood and residents can apply directly.

"As developers come to the area, they have a responsibility to engage the local community first. The website is to take the load off of the developers as they seek employees," Toussaint says.

The group has high aspirations for what $Little-Haiti-Coin can become and how it can help the community. The organizers hope large companies invest in the cryptocurrency, and, by extension, in Little Haiti. Part of the proceeds go toward projects sponsored by the vendors' association.

"We want to invite Publix to buy $Little-Haiti-Coin, and we want the top 100 companies in Florida that Haitians have supported for generations to invest in our community," Martin says.

For Salomon, who owns Fernandine's Variety Store, a Little Haiti business named for his great-grandmother and given to him by his grandmother when he turned 18, the cleanups and the association's efforts are a way to give back to the home he's always known.

"It's more about investing in the community I was raised in. I've been in this area since I was young, and it means a lot to have the Haitian community reap the benefits of the development coming in," Salomon says.
KEEP MIAMI NEW TIMES FREE... Since we started Miami New Times, it has been defined as the free, independent voice of Miami, and we'd like to keep it that way. With local media under siege, it's more important than ever for us to rally support behind funding our local journalism. You can help by participating in our "I Support" program, allowing us to keep offering readers access to our incisive coverage of local news, food and culture with no paywalls.
Make a one-time donation today for as little as $1.