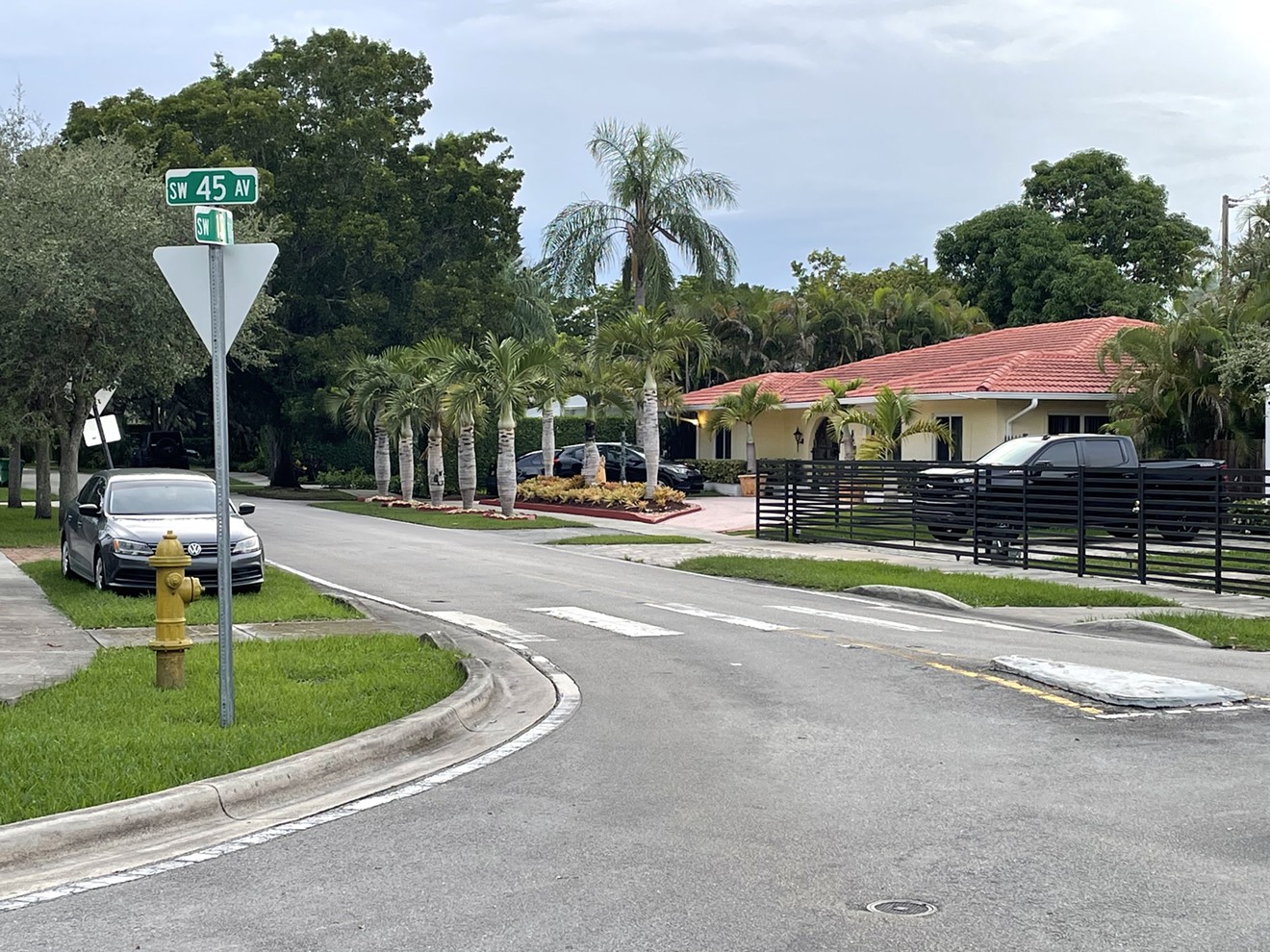 "This has been going on for 30 years in the making," Shane tells New Times.

Now, Coral Gables Mayor Vince Lago is making another attempt at annexation. On August 24, the city commission approved a resolution authorizing the city attorney and city manager to "re-initiate the annexation process for Little Gables."

"The intent is to do all of the legwork upfront now and move it in a direction where we will never step on the floor of the [board of county commissioners] if we don't have a sure understanding of what the commission at minimum is going to be pushing forward," the mayor said at the city meeting.

Back in 2017,  Coral Gables submitted an application to the county to annex the unincorporated area after 24 percent of the neighborhood's residents voiced their support of the measure. Two years later, the county rejected the proposal because the city would close the neighborhood's Gables Trailer Park, displacing the more than 200 elderly residents.

For this latest attempt, the mayor will serve as the city's representative in meeting with county officials to see if annexation is possible. The city has authorized spending $170,000 on consulting in connection with the planned annexation, which is already more than half of what the city spent in the two years exploring the issue for the 2017 application.

"Last time around, they were not fully prepared," Little Gables resident Luciana Gonzalez tells New Times. "They now want to spend the money on professionals who can put together something for Coral Gables to move ahead."

Shane points to public safety as one reason why annexation is necessary. As president of the Little Gables Neighborhood Association, she tells New Times she has received countless emails from residents complaining of slow emergency response times, including one incident in which a woman said she waited two hours for the police to arrive after her house was burglarized.

"When you call 911, it doesn't go to the county straight away," Shane says. "Most of the time, it goes to the city of Coral Gables and gets bounced around."

Gonzalez adds that the county police "is stretched too thin." The Little Gables neighborhood has been served by the Miami-Dade Police Department out of its midwest district station, which is seven miles away.

The Coral Gables public safety facility that houses both police and fire rescue is little more than a mile away. Despite its proximity, it cannot serve the residents of Little Gables until the community is annexed.

"All we want is safety and security — the kinds of services that we are paying for that the county just cannot provide because we're too far away," Shane says.

But not all Little Gables residents are in favor of annexation. Madeline Dominguez fears many of the longtime residents living on fixed incomes will be unable to afford the increase in property taxes and associated fees that comes with joining the "City Beautiful."

"I don't think it is fair they may have to sell because they won't be able to afford the taxes in the tax increase," says Dominguez, who has lived in the area since 2007.

According to a recent Miami Herald report, the millage rate per $100,000 of taxable value for this year in unincorporated Miami-Dade is $191 versus $556 in Coral Gables.

Dominguez also worries about the fate of the trailer park residents if annexation does go through. She says she does not want the park area to fall victim to the rapid redevelopment that has taken place throughout South Florida.

"Those people have been in a trailer park longer than my sister who has been living in this neighborhood since 1985," Dominguez tells New Times. "They have the right to live here too."

Little Gables resident and affordable housing developer Doug Mayer tells New Times he cannot support annexation if there is not a plan to relocate the trailer park residents. In the meantime, he plans to meet with county public housing officials to develop an affordable housing solution for them.

"I don't want those people to just end up on the street or at the homeless shelter," Mayer says.
KEEP MIAMI NEW TIMES FREE... Since we started Miami New Times, it has been defined as the free, independent voice of Miami, and we'd like to keep it that way. With local media under siege, it's more important than ever for us to rally support behind funding our local journalism. You can help by participating in our "I Support" program, allowing us to keep offering readers access to our incisive coverage of local news, food and culture with no paywalls.
Make a one-time donation today for as little as $1.