We Really Hope This Isn't the Miami Heat’s Newest Jersey 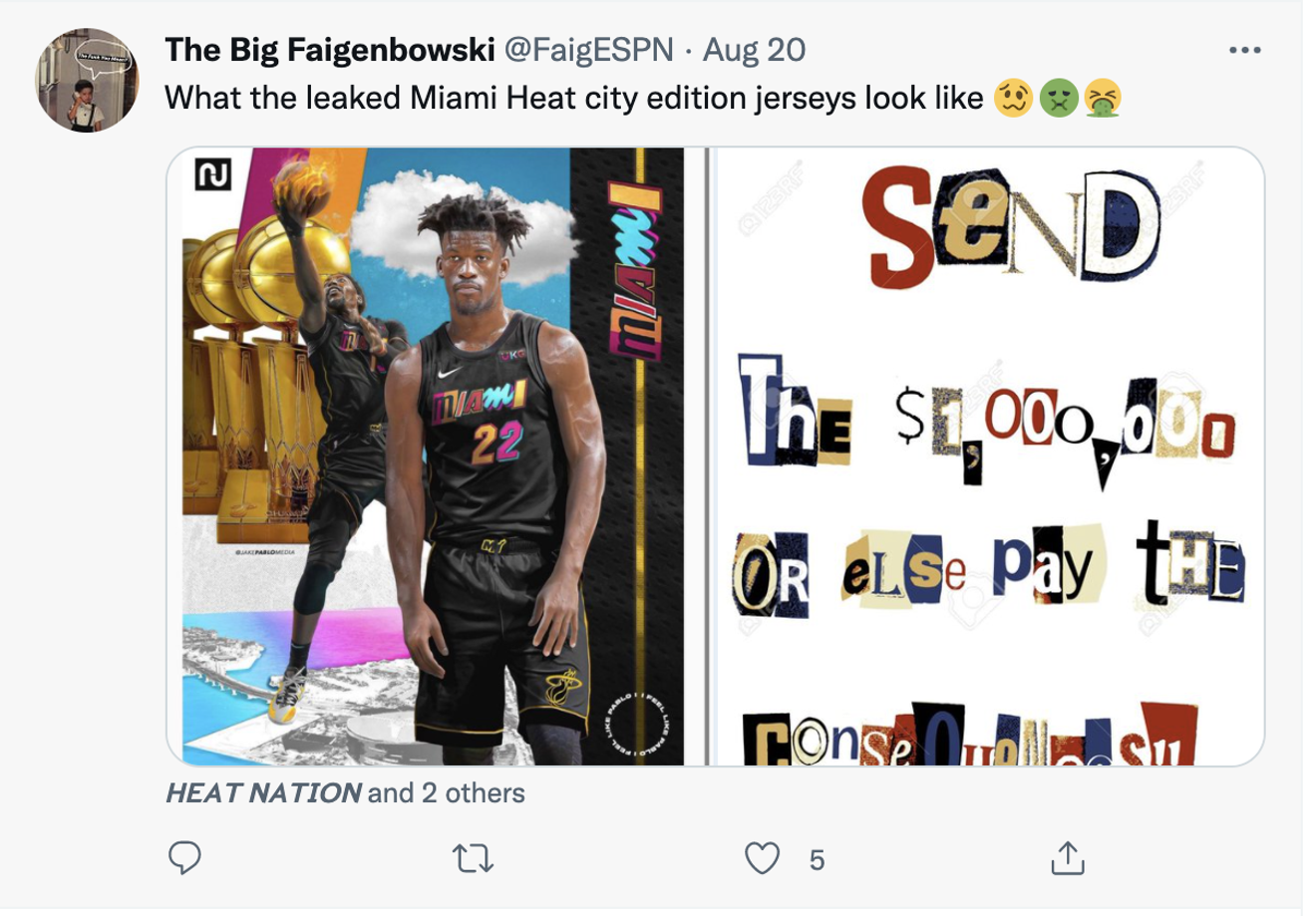 It is indeed reminiscent of a ransom note. Screenshot via Twitter/@FaigESPN
The Miami Heat are traditionally the undisputed heavyweight champions of alternate basketball jerseys. Over the years, the Heat have always been the leader in best annual one-off looks, but the true knockout punches commenced in 2017 when Miami unveiled and sold more of its 'Vice' jerseys than the City Edition uniforms of all other 29 NBA teams combined.

From the black “Vice Nights” edition to a fuchsia “Sunset Vice” edition to a blue “ViceWave” edition, the most recent and final installment in the Vice series — called the “ViceVersa" jersey — had the rest of the league probably wishing the Heat would disappear from the alternate jersey game, leaving only a ransom note.

That may explain why the newest alternate Heat jersey appears to be coming from a dungeon in the FTX Arena. The leaked images of them appear to be a cry for help.


It might be too soon to alert the authorities, but someone please tell Micky Arison. It seems someone has taken the Miami Heat hostage, and the City of Miami needs to pay between $21 million and $22 million for their safe return.


This is reportedly a Miami Heat alternative jersey for next season. 👀

That said, it also seems unfathomable that a group of high-level executives sat at a boardroom table and decided these ransom jerseys were it.

If you haven't picked up on it yet, these (hopefully fake) jerseys seem to be a combination of all of Miami's past designs. From Vice to the Floridians, all of the throwbacks are in there. All of them. Imagine every single past alternate jersey lining up for a group photo. That's what this monstrosity is.

Predictably, the Miami Heat are being dragged on social media. It's not the best marketing when the collective first thought fans have when looking at your new merchandise is: kidnapping.

Blink twice if the Milwaukee Bucks have you tied up in an industrial warehouse, Miami Heat. We'll call Liam Neesom or something. There is still time to rescue you and stop these from happening.

After last season's 'Earned Edition' alternate jerseys that claimed to be "trophy gold" but wound up looking more like a knockoff of the Indiana Pacers, we seem to be on an alternate-jersey losing streak.

Perhaps a second-grade teacher will claim copyright infringement from their arts-and-crafts homework?

Unless these are fake — or burned and never spoken of again.
KEEP MIAMI NEW TIMES FREE... Since we started Miami New Times, it has been defined as the free, independent voice of Miami, and we'd like to keep it that way. With local media under siege, it's more important than ever for us to rally support behind funding our local journalism. You can help by participating in our "I Support" program, allowing us to keep offering readers access to our incisive coverage of local news, food and culture with no paywalls.
Make a one-time donation today for as little as $1.