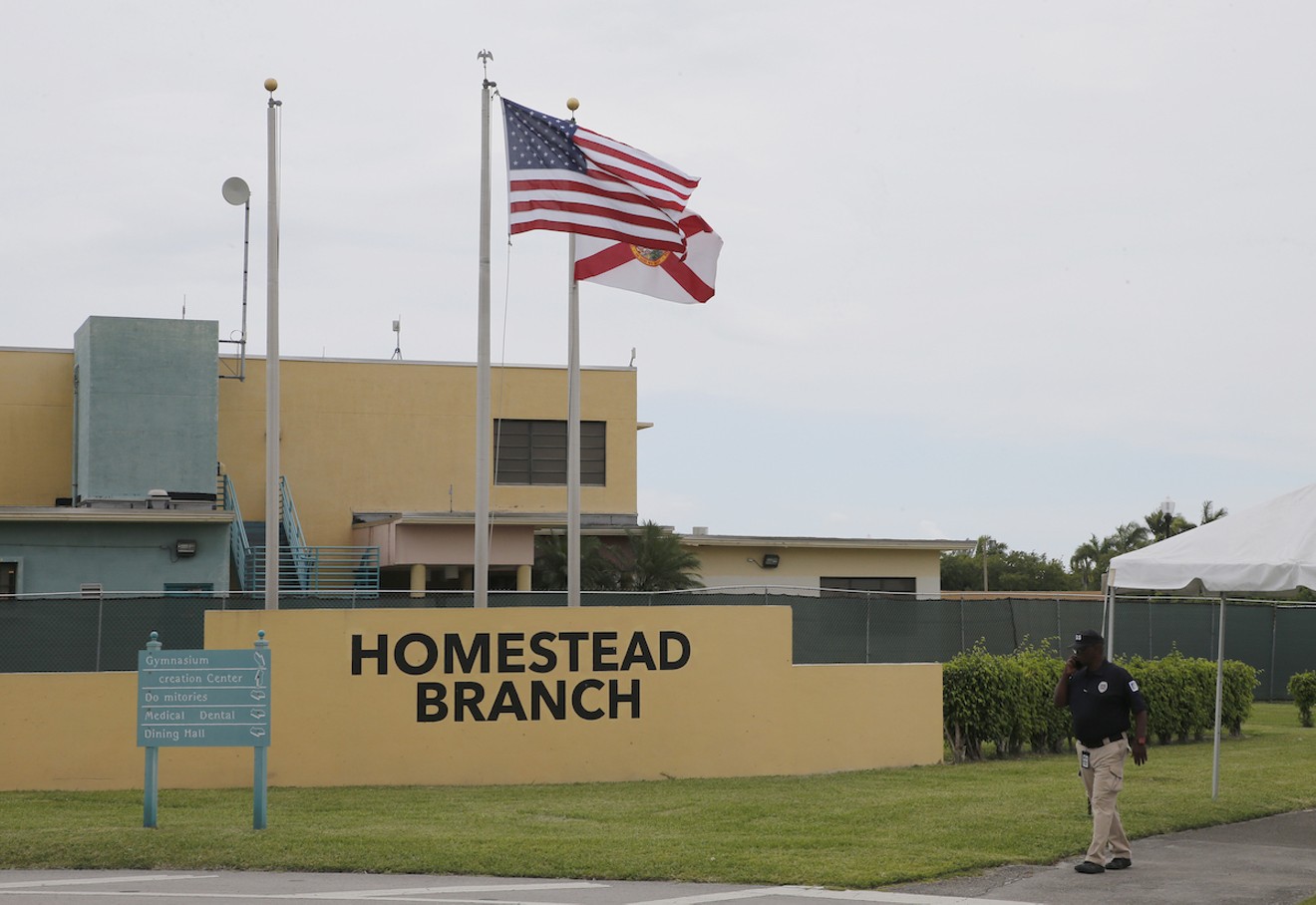 Homestead Temporary Shelter for Unaccompanied Children Photo by Joe Skipper / Getty Images
Advocates for the kids held at the Homestead Temporary Shelter for Unaccompanied Children have already said conditions inside the facility have likely left migrant kids with permanent psychological trauma. Now, a new report issued by an activist group suggests the children might have also been poisoned there.

This week, scientists and analysts with the American Friends Service Committee released a 12-page report showing the Homestead detention facility, which was recently shut down for hurricane season, stands next to multiple U.S. military Superfund pollution sites. They include areas known to contain dangerous levels of arsenic, lead, mercury, polycyclic aromatic hydrocarbons (PAHs), and trichloroethene. The report does not state there is direct evidence that kids held at the Homestead camp were exposed to toxic chemicals, but the activists say the federal government needs to show it has conducted extensive soil and pollution testing to prove the children there did not come into contact with trace amounts of lead or arsenic.

The Shelter is directly adjacent to the Homestead Air Force Base EPA Superfund site (EPA ID FL7570024037). Eight Superfund contaminated areas (called operable units, or OUs) are directly west, east and south of the Shelter. These contaminated OUs were once part of the Homestead Air Force Base and were used for the storage of hazardous materials, including munitions and industrial waste, and for aircraft maintenance, testing, and disposal. The EPA reports that “additional measures are needed for long-term protectiveness from direct exposure” and that these OUs are “located in an unpopulated area, with no residences located on the site or nearby.” These sites are in fact directly adjacent to a residential facility for migrant children.

In fact, according to a map attached to the report, multiple sites sit along the edge of the migrant compound:

WeCount
Reached by phone yesterday, one of the report's authors, New York University Ph.D. student Emma Shaw Crane, told New Times she'd been interviewing soldiers and paramilitary officers for separate doctoral research when some of them mentioned they'd heard that Homestead Air Reserve Base, which stands next to what is now the detention center, was situated dangerously close to multiple sites where the military dumped hazardous chemicals. Those locations are listed in the federal government's toxic-waste cleanup program, Superfund, because of the risk they pose to human health and the environment. Shaw Crane began looking into the idea in 2015 but told New Times yesterday she started examining the evidence in detail once the Trump administration reopened the site and began placing children there in 2017.

"We're asking that the government conduct soil and groundwater testing at what was until recently the shelter, and we're demanding that children not be returned to this site under any circumstances," she said. "We've also heard rumors this could potentially be used for some sort of women’s detention facility or women’s prison, and we're demanding the site not be used for that as well."

Toxic parks are not a new phenomenon in Miami-Dade County. In 2013, New Times wrote that numerous public parks had been built directly on top of dumpsites full of dangerous, cancer-causing incinerator ash. In 2017, a group of Coconut Grove residents sued the City of Miami for forcing black residents in a segregated neighborhood to live next to "Old Smokey," a trash incinerator that belched cancerous smoke into the air. And last month, the Miami Herald reported that arsenic pollution at Melreese Park, the proposed site for David Beckham's Miami Major League Soccer stadium, is so bad the park might not be safe for city residents to use.

The Homestead detention center is currently empty, but the Miami Herald has reported that the federal government will likely begin returning kids there as early as next month. Spokespeople for the Department of Health and Human Services (HHS) did not respond to a request for comment this week about the study. But earlier this week, HHS commented on a separate report alleging kids at the Homestead camp did not have adequate mental-health care or avenues to report abuse. In response to that story, HHS told New Times there are "no current plans to resume operations at the Homestead temporary emergency influx facility" but said it could not rule out the possibility that Homestead would fill with children again by the end of the year.

The American Friends Service Committee demands the federal government conduct extensive soil testing before kids are placed there. The report points out that plots of land close to the facility contain levels of arsenic "at concentrations significantly greater than EPA screening levels" and that it's possible soil on the facility's grounds is similarly poor. In fact, the report notes that when the Air Force transferred portions of the land to Miami-Dade in 2005, the county was told it had to '“protect human health and the environment with regard to residual contamination remaining on the property" and that the county "shall not use the property for permanent residential purposes, hospitals for human care, public or private schools for persons under 18 years of age, or day care centers for children." In 2011, the federal government's Special Operations Command South (SOCSOUTH) planned to build a structure near the site where the Homestead camp now stands, and SOCSOUTH was warned it had to '“avoid accidental exposure to arsenic contamination in soils and groundwater onsite" at nearby plots of land.

Separately, the activists also allege noise pollution at the Homestead encampment seems to be as bad as or worse than any potential environmental pollution. Because the site sits close to the Homestead Air Reserve Base, the report notes that decibel levels from the runway are consistently so loud they violate Miami-Dade's 2017 land-use restrictions. Shaw Crane told New Times yesterday she's spoken to children formerly stuck inside the camp who said the noise from the runway kept them awake at night and made them feel anxious.

James Brinkman, another scientist consulted for the study, said in a news release that he believes the soil on the Homestead facility's grounds likely contains some level of contamination, especially after Hurricane Andrew tore up the land there in 1992.

"The Homestead Shelter is located within a Superfund site with at least 16 known sources of contamination within two-thirds of a mile from the shelter," he wrote. "In August of 1992, Hurricane Andrew impacted the area and further spread contamination. Given the widespread distribution of contamination around the shelter and the lack of data at the shelter, children housed at the shelter will likely be exposed to unsafe levels of hazardous chemicals both in the soil and emanating from the soil and shallow groundwater into the air."
KEEP MIAMI NEW TIMES FREE... Since we started Miami New Times, it has been defined as the free, independent voice of Miami, and we'd like to keep it that way. With local media under siege, it's more important than ever for us to rally support behind funding our local journalism. You can help by participating in our "I Support" program, allowing us to keep offering readers access to our incisive coverage of local news, food and culture with no paywalls.
Make a one-time donation today for as little as $1.