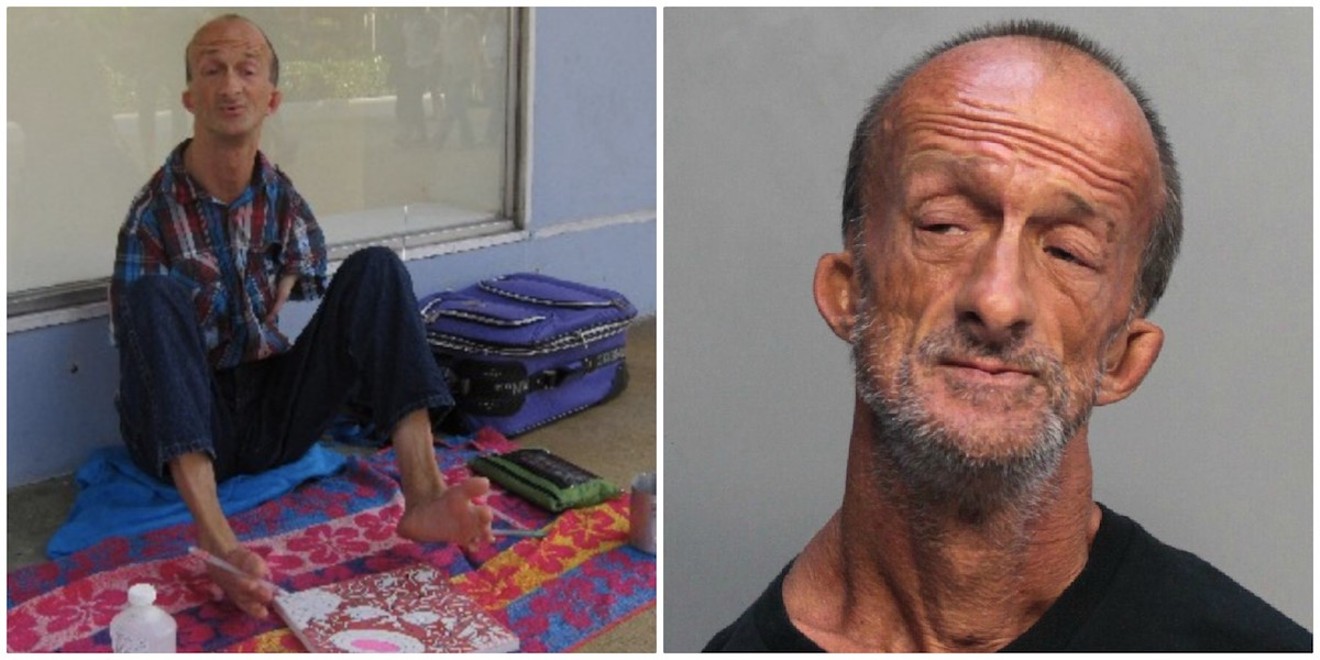 Jonathan Crenshaw is a well-known homeless street artist in South Beach. Photos: Camille Lamb/Miami-Dade Corrections
Anyone who's ever wandered down Lincoln Road has probably seen Jonathan Crenshaw at work. A homeless man with no arms, Crenshaw has spent years in South Beach painting colorful canvases using his feet while tourists circle and gawk at the work.

But early yesterday morning, one of those tourists ended up bleeding on the ground after police say Crenshaw grabbed a pair of scissors with his feet and stabbed the man. Crenshaw told police the man, a Chicago resident, had punched him, but the victim told police he'd only asked for directions before the attack.

Crenshaw is now charged with aggravated battery with a deadly weapon.

It's not clear when Crenshaw arrived in Miami Beach, but he has a long string of arrests dating back to at least 2008 for everything from trespassing and disorderly intoxication to multiple charges of battering police.

A New Times writer profiled the artist in 2011 but didn't have much luck getting straight answers from him about his background. The 46-year-old said he was born in Alabama but moved around repeatedly as a child, and accused his mother of feeding him "rat poison," though he declined to discuss the condition that left him with short, wing-like limbs in the place of arms.


The Lincoln Road-based Art Center/South Florida gave him painting supplies, he said, though he blamed city officials for repeatedly hassling him about getting permits to paint on the bustling pedestrian mall. He said tourists often bought his work — colorful mosaics with a regular theme of eyes — for up to $60.

But in the interview, it was also clear that Crenshaw was profoundly troubled. "Sometimes I wish I were dead," he told the reporter. "I'm not trying to kill myself or anything. But then I wouldn't have to suffer."

Court records show Crenshaw has repeatedly clashed with police and has been charged with violent crimes in the past. He's been charged at least four times since 2010 with battery on police, firefighters, and city code inspectors. In 2011, he was caught on-camera trashing a hotel lobby.

Most recently, he was convicted of felony battery on a police officer in 2014 and sentenced to 180 days in jail.

His latest case started just after midnight on Monday, when 22-year-old Cesar Coronado, the visitor from Chicago, says he and a female friend stopped at Collins Avenue and 16th Street to ask Crenshaw for directions. Instead of helping, Crenshaw grabbed a pair of scissors, stabbed Coronado in the arm, and then ran off, they say.

Police found Crenshaw nearby a few minutes later. He told the officers "he was lying down and a guy came up and punched him in the head," so he pulled out the scissors to defend himself.

But with Coronado's friend backing up his version of the story, police arrested Crenshaw. He's now facing one felony county of .
KEEP MIAMI NEW TIMES FREE... Since we started Miami New Times, it has been defined as the free, independent voice of Miami, and we'd like to keep it that way. With local media under siege, it's more important than ever for us to rally support behind funding our local journalism. You can help by participating in our "I Support" program, allowing us to keep offering readers access to our incisive coverage of local news, food and culture with no paywalls.
Make a one-time donation today for as little as $1.