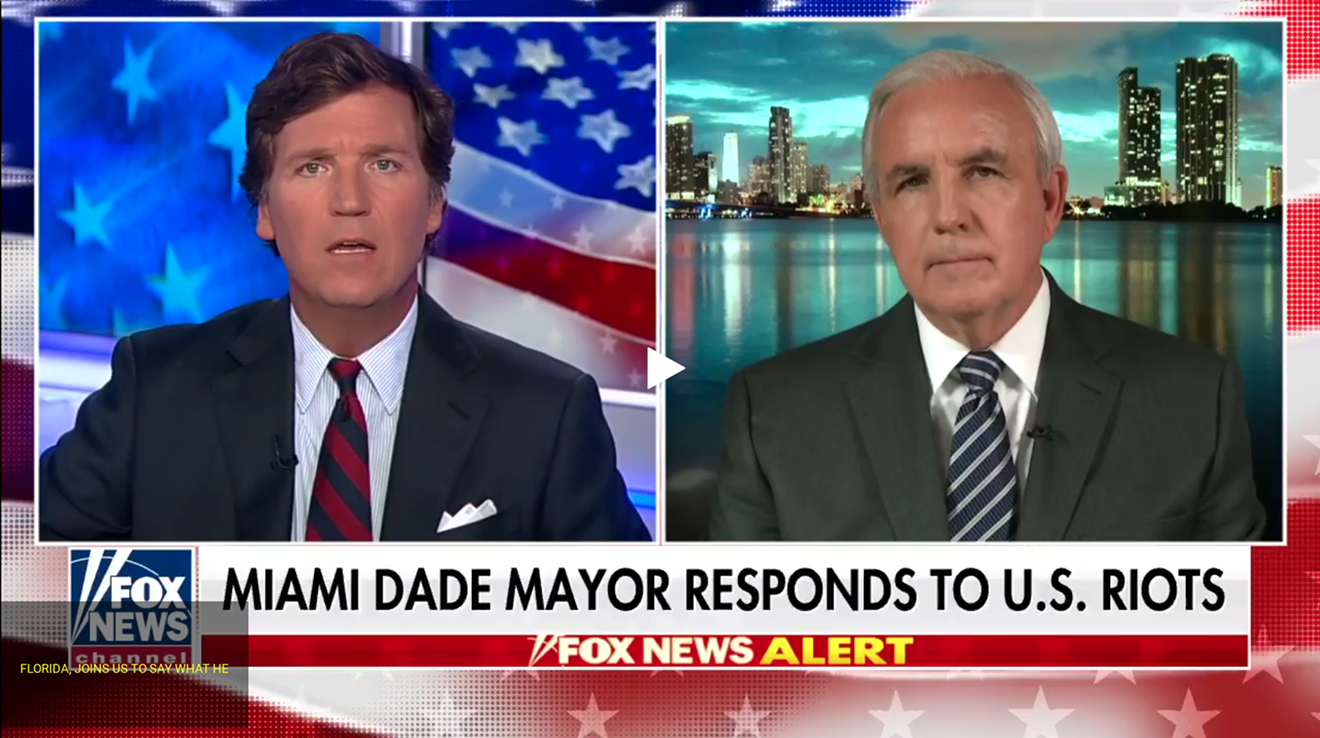 Tucker Carlson asked Miami-Dade Mayor Carlos Giménez how leaders kept Miami from being "sacked" like other cities. Screenshot via Fox News
Miami had its share of moments in the national spotlight this week following days of protests demanding justice for George Floyd, the 46-year-old black man who died after a Minneapolis police officer pinned him to the ground with a knee to the neck on May 25.

And City of Miami Police Chief Jorge Colina and Miami-Dade County Mayor Carlos A. Giménez made the rounds on Fox News yesterday to talk "law and order," outside agitators, and what made Miami's protests peaceful and successful in the eyes of Fox host Tucker Carlson.


I’m proud of #OurCounty coming together to denounce the horrific crime committed against George Floyd in Minneapolis, and as you’ll see in this interview with @TuckerCarlson I’m also proud of how we've worked together to keep our protests peaceful. https://t.co/UYFVk7vpAm

Carlson, whose political talk show Tucker Carlson Tonight airs at 8 p.m. each weekday, interviewed Giménez, asking the county mayor why Miami-Dade didn't get "sacked" like other places across the nation that are experiencing unrest.

"The difference is that we're embedded in the community, and the community here does not want to see what's happened in Minneapolis and those other cities," Giménez said. "And so, when we have outsiders here, we know that they're here."

Giménez also said the county has "strict parameters and borders" when it comes to acceptable behavior.

"We will protect your right to protest, but we will not protect your right to ransack and loot and set buildings on fire and put lives in danger," Giménez told Carlson. "...We have been embedded in the community for a long time here. They trust us, and so they don't want outsiders agitating them into destroying, you know, this beautiful city, which we've built."

In a separate interview on the morning show Fox & Friends earlier in the day, host Brian Kilmeade asked Colina about the arrests in Miami over the past weekend. The city's police chief echoed what departments across the U.S. have said about disturbances mostly being caused by outsiders looking to make trouble, stoke division, and drown out the message of peaceful protesters.

"Well, what we already know from across the country, that you have a group of individuals that are really the ones that want to create chaos," Colina said. "They're the ones that end up creating that mob mentality that we see in many places. Some of the folks that come out really, probably intended to protest peacefully, and they kind of get caught up in that nonsense. And those people, by the way, they don't care anything about George Floyd or justice — they just want to create destruction and divide us further."

After peaceful protests devolved into chaos Saturday night in Miami, officials said most of the "agitators" were outsiders. Colina stated that only 13 of the 57 people who were arrested Saturday live inside Miami's city limits. The Miami Herald provided more context, reporting that 30 of the 57 live in Miami-Dade County, 11 have addresses in Broward or Palm Beach, 7 had out-of-state addresses, 6 were homeless, and 3 did not list an address.

Although most of those arrested were from South Florida, Colina told New Times last night that he still considers anyone who came into Miami and destroyed property or otherwise committed a crime to be an outsider, including those who reside in Miami-Dade County. He said he believes it's significant that few of the people who were arrested live within the city limits and that he doesn't think it's disingenuous to call the remainder "outsiders."

"People who wanted to loot, burn a car, smash a window, graffiti cars — those are the people we arrested," Colina said. "Why are you damaging something where it becomes so easy because you don't have any nexus to it? If that was your neighborhood, or you worked there, would you smash it?"

President Donald Trump has blamed "radical-left" groups for acts of violence and looting during protests. Reuters reports that while loosely affiliated groups like Antifa could be contributing to violence and white supremacists are stoking tensions online between law enforcement and protesters, the Department of Homeland Security has found that most of the violence has been opportunistic.
KEEP MIAMI NEW TIMES FREE... Since we started Miami New Times, it has been defined as the free, independent voice of Miami, and we'd like to keep it that way. With local media under siege, it's more important than ever for us to rally support behind funding our local journalism. You can help by participating in our "I Support" program, allowing us to keep offering readers access to our incisive coverage of local news, food and culture with no paywalls.
Make a one-time donation today for as little as $1.