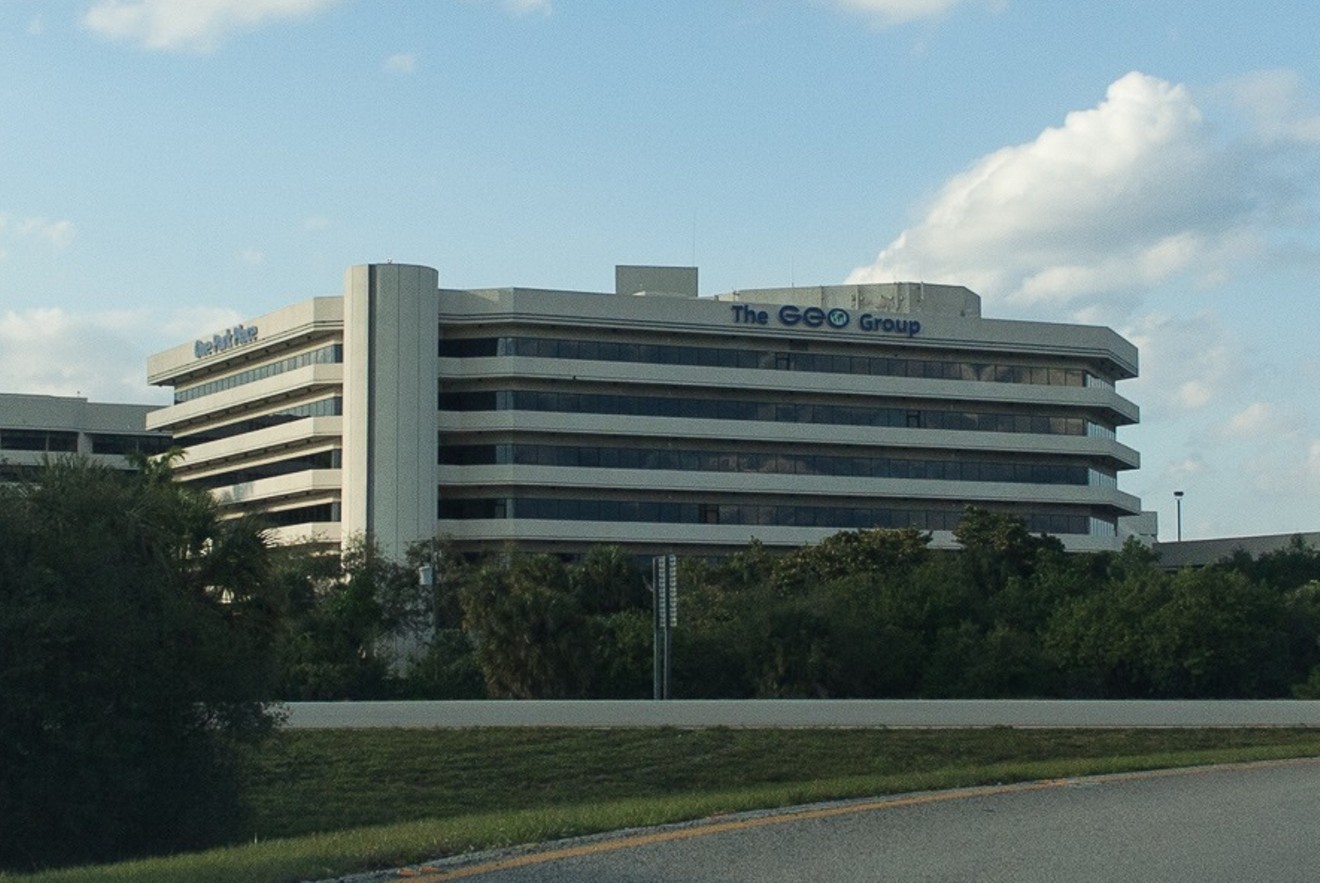 Now even the company's own shareholders say they're concerned. GEO, a Boca Raton-based company now considered the largest private, for-profit prison firm in America, held an annual shareholder meeting today — and a majority of shareholders passed a resolution demanding that GEO better report human rights policies and violations to investors.

The activist shareholders — who work with the Interfaith Center on Corporate Responsibility (ICCR), a group founded to force companies to divest from apartheid South Africa — pushed GEO in 2013 to develop its first human rights policy. Because reports of human rights abuses have continued, the investors now want GEO to release a new human rights report by September.

"We’re not experts in running their business, and we’re not trying to be," Pat Zerega, an investor with a religious company called Mercy Investment Services, tells New Times. "But we want to be able to make a judgment that the company is moving forward on this stuff."


The GEO Group (“GEO”) represents itself as “the world’s leading provider of correctional, detention, and community reentry services” and promotes itself as having “always been committed to protecting human rights.” However, the company faces increasing scrutiny and expectations from investors and clients regarding its human rights performance.

The Department of Homeland Security’s Office of Inspector General in October 2018 reported “serious issues relating to safety, detainee rights, and medical care” at a GEO-owned and operated immigration detention center in Adelanto, California. Inspectors found nooses made from twisted bed sheets in 15 of 20 cells inspected, despite 1 suicide and 7 attempts at the facility last year. In addition, during their visit officials found that all 14 detainees in administrative segregation had been placed inappropriately.

GEO's board initially told investors to vote against the resolution, according to documents filed with the Securities and Exchange Commission. The company claimed its internal abuse-monitoring protocols are already adequate and that the fall 2019 report deadline was too soon.

"Our Board has carefully considered this shareholder proposal and does not believe that its adoption at this time is in the best interests of GEO and its shareholders," the company's statement said. "We believe the timing of the report requested of September 2019 is arbitrary and does not give us sufficient time to develop a meaningful report. Additionally, and more importantly, any report that we produce must give due consideration to the legal, contractual, and statutory obligations GEO has with respect to the confidentiality of information about those in its custody and care, and we believe the shareholder proposal does not give due consideration to these obligations."

GEO later revoked that statement. In a filing with the SEC, GEO wrote that the company's "position has evolved" and that "our Board is withdrawing its original recommendation to the shareholders to vote against" the idea.

GEO, previously known as Wackenhut, was founded in Coral Gables by ex-FBI agent George Wackenhut. The company has since grown into a government-contracting juggernaut. In addition to housing prison inmates, the company is the single largest contractor for Immigration and Customs Enforcement. According to the Tampa Bay Times, GEO is now also investing heavily in inmate rehabilitation to turn a profit from the nation's growing "decarceration" movement.

The Miami Herald reported last month that GEO turned a $618 million net profit in 2018. Business is booming under President Donald Trump, and it's not exactly a coincidence the firm donated heavily to his campaign. (Watchdog groups alleged some of those donations were illegal because federal contractors aren't allowed to donate to federal races.) Most infamous, GEO held a 2017 annual meeting at the Trump National Doral Miami.

But the company is also hated by civil rights activists, who say the company shouldn't be allowed to turn a profit from caging other humans. And activists warn that the company's political donations unfairly skew the political process in GEO's favor. (GEO recently hired former Florida Senate President Joe Negron to serve as its chief lawyer, too.) The company's reputation has become so politically toxic that every major Democratic candidate for Florida governor in 2018 loudly refused to take GEO's money. Even the Florida Democratic Party last year banned all donations from private-prison firms. Activists for the past few years have also staged massive protests at GEO facilities, including demonstrations outside the Broward Transitional Center in Pompano Beach. GEO later threatened to sue the activist group Dream Defenders for criticizing the company. (The American Civil Liberties Union said those threats were laughably weak.)

It turns out, though, a handful of GEO's investors come from 12 religious or human rights groups that belong to the Interfaith Center on Corporate Responsibility. The shareholders wrote in the aforementioned resolution that they are concerned about three lawsuits in California, Washington, and Colorado that accuse GEO of forcing immigrant detainees to perform menial labor so they can afford food and basic toiletries while behind bars. (GEO has long denied that amounts to forced labor.)

The investors' letter doesn't mention some other major issues that have sprung up at GEO facilities recently. Most notably, José Ibarra Bucio, a 27-year-old immigrant detainee at GEO's Adelanto Processing Center outside of Los Angeles, fell into a coma and died earlier this year. Ibarra's family previously told the Los Angeles Times they felt ICE was keeping them in the dark as to what actually happened to him. In 2017, three different detainees at the same California facility died within a three-month span.

Though GEO says it's doing all it can to cut down on abuse allegations, Zerega says many investors see negative reports about the company appearing at a constant clip.

"We want to be able to make a judgment that the company is moving forward," she says. "It's still not clear to me what’s going to be in this report, but they claim they have very good attention to human rights issues. We want to be able to verify that that’s true. It's like that old saying: Trust but verify."
KEEP MIAMI NEW TIMES FREE... Since we started Miami New Times, it has been defined as the free, independent voice of Miami, and we'd like to keep it that way. With local media under siege, it's more important than ever for us to rally support behind funding our local journalism. You can help by participating in our "I Support" program, allowing us to keep offering readers access to our incisive coverage of local news, food and culture with no paywalls.
Make a one-time donation today for as little as $1.