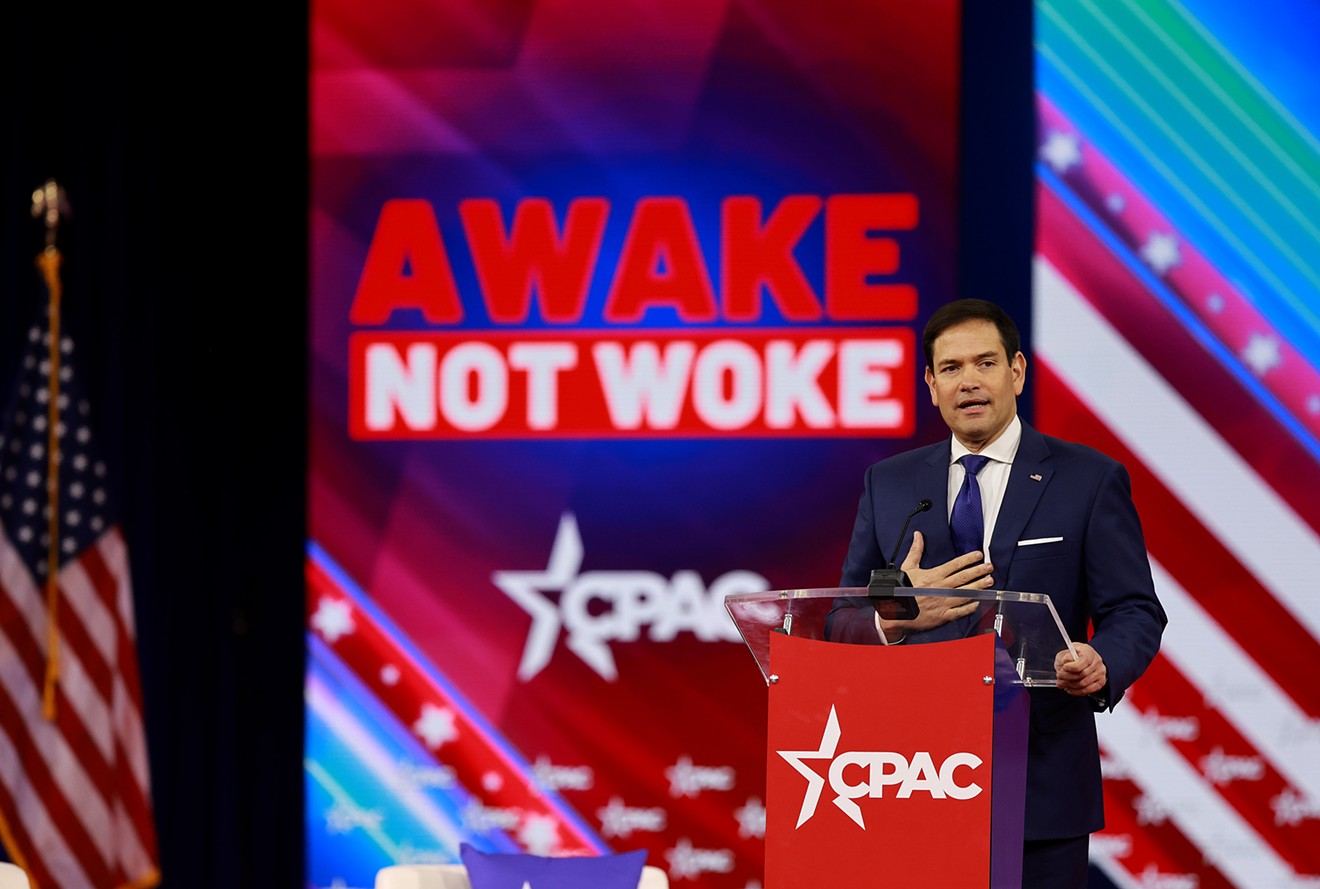 Marco Rubio, "stupid waste of time" expert Photo by Joe Raedle via Getty Images
On Tuesday, July 19, the U.S. House of Representatives passed a bill that would enshrine same-sex and interracial marriage nationwide.

Following the Supreme Court’s decision to overturn Roe v. Wade and Justice Clarence Thomas’ assertion that other rights, like same-sex marriage, could be next, forty-seven Republicans joined every single House Democrat in support of the bill, formally known as the Respect for Marriage Act. Among the GOP supporters were a number of Floridians, including U.S. Representatives Kat Cammack, Carlos A. Giménez, Brian Mast, and Maria Elvira Salazar.

But U.S. Sen. Marco Rubio indicated that when the bill reaches the Senate, he won't follow their example. Far from it, in fact. He told CNN reporter Manu Raju on Wednesday that the bill was "a stupid waste of time."

A number of Rubio's critics would likely use similar adjectives when referring to pieces of legislation the senator himself has proposed over the years.

In light of that blast of cognitive dissonance, New Times offers a rundown of five Rubio-sponsored bills that many would be likely to deem either "stupid" or a "waste of time" — or both.


Marco Rubio told me that he is a NO on House’s same-sex marriage bill, calling it a “stupid waste of time”

A Bill to Create a "Space National Guard"

The U.S. Space Force requires its own National Guard, no? In May of 2022, three years after then-President Donald Trump insisted on establishing the universally mocked Space Force, Rubio and California Sen. Dianne Feinstein proposed a new component to the agency: the Space National Guard. "At a time when China and Russia are seeking to overtake the United States in space...we cannot afford any setbacks in our own space program," reads a recent news release touting the bill. Specifics, including whether Guard uniforms will be as Battlestar Galactica-like as the force's, remain unclear.

Protecting gay and interracial marriage isn't the only thing Rubio finds "stupid." For the past several years, the senator has been on a quest to abolish what he has called a "dumb" and "stupid" time change, which led him to introduce the Sunshine Protection Act in March of 2021, seeking to make daylight saving time permanent across the United States.

Though the bill unanimously passed the Senate a year later, it's bound to have a harder row to hoe in the House of Representatives, perhaps because claims that brighter evenings would benefit Americans' health by reducing car crashes and risk for cardiac issues, stroke, and seasonal depression haven't been studied too well, much less proven.

A "Parental Leave" Bill That Taxes the Dead

After Roe v. Wade was overturned in June 2022, Rubio introduced a parental leave bill he described as a "pro-family framework." But as recently noted by attorney Matt Brueing, founder of the think tank People's Policy Project (3P), the bill would quietly force families of those who die young to cough up some sort of death tax.

Buried deep within the bill is a detail that says if a person dies before reaching old age, all of the parental benefits they received during their lifetime will be deemed "overpayments" and the Social Security Administration will demand the deceased's estate repay them.

A Bill to Remove Tax Breaks for "Woke Corporations"

In May, after the Roe v. Wade decision was leaked and some of the nation's largest companies — including Amazon, Disney, Citigroup, and Uber — announced that they would cover travel expenses for employees seeking abortions or gender-affirming procedures, Rubio introduced the No Tax Breaks for Radical Corporate Activism Act to ban employers from deducting expenses related to their employees' abortion travel costs or gender-affirming care for young children of employees.

A Bill to Make Child Support Begin at Conception

On July 14, Rubio and fellow Republican Sen. Kevin Cramer of North Dakota introduced the Unborn Child Support Act, which would allow mothers to receive child-support payments before they give birth. Per the bill, the obligation would be backdated so as to "begin with the first month in which the child was conceived, as determined by a physician (and shall begin with that month if the mother so requests)."

Critics have noted that the bill could serve as a strategy to redefine a fetus as a person from the moment of conception.
KEEP MIAMI NEW TIMES FREE... Since we started Miami New Times, it has been defined as the free, independent voice of Miami, and we'd like to keep it that way. With local media under siege, it's more important than ever for us to rally support behind funding our local journalism. You can help by participating in our "I Support" program, allowing us to keep offering readers access to our incisive coverage of local news, food and culture with no paywalls.
Make a one-time donation today for as little as $1.