Father of FIU Bridge Collapse Victim: Statue "Doesn't Look Like Anything Close to My Daughter" 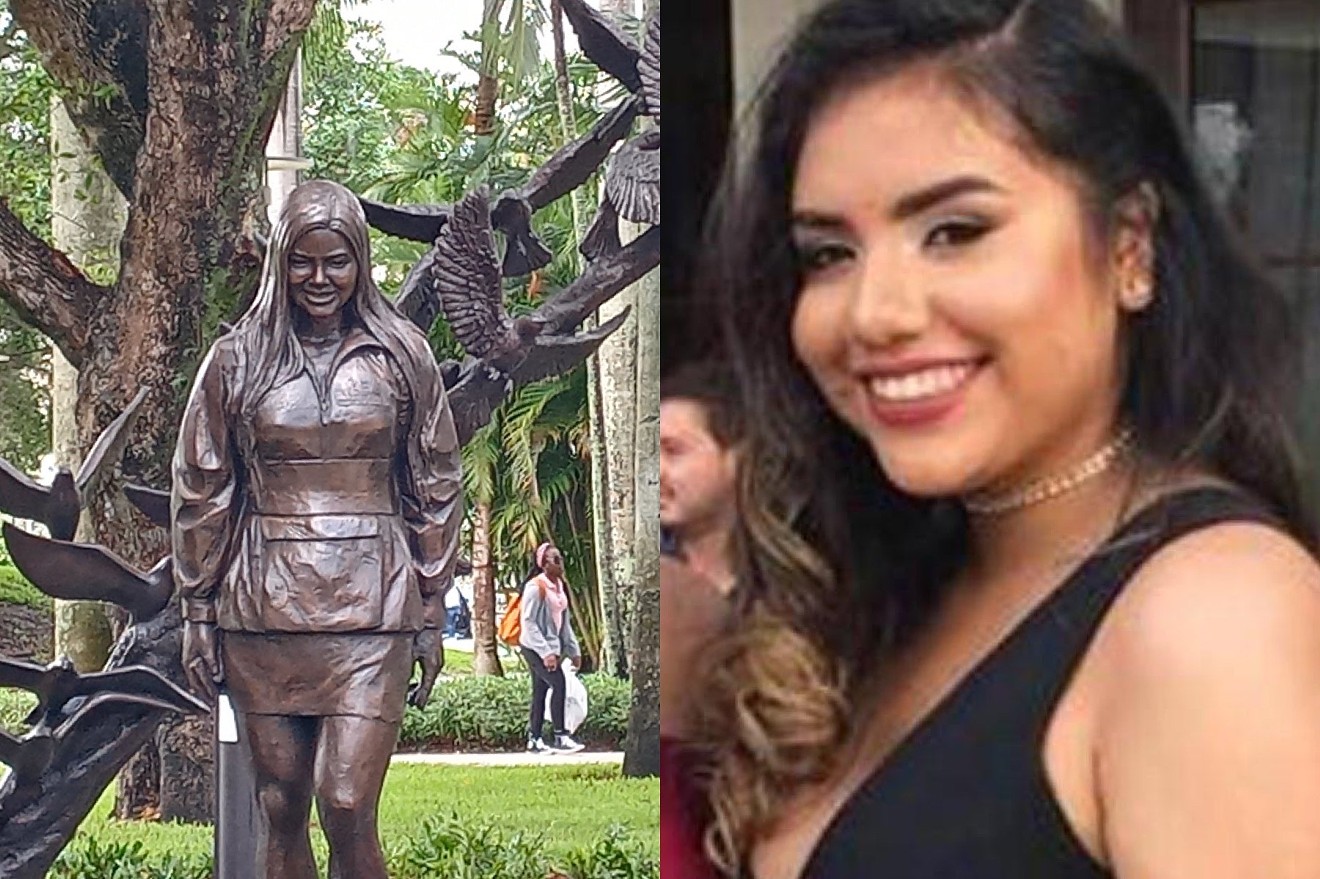 The Alexa M. Duran Memorial statue was unveiled on the four-year anniversary of the FIU bridge collapse. Photo by Joshua Ceballos, Screenshot via @MoniqueOMadan/Twitter
At 1:47 p.m. on Tuesday, a crowd gathered around a bronze statue of a young woman outside the Green Library on the main campus of Florida International University (FIU). They stood in silence memorializing the exact moment four years ago when just a third of a mile from where they now stood, a pedestrian bridge collapsed over Tamiami Trail, killing 18-year-old FIU student Alexa Duran and five other motorists.

On the fourth anniversary, FIU unveiled the Alexa M. Duran Memorial statue, cast in her image. It includes 18 doves representing each year of her life and five pillars to commemorate the other five people who died that day: Navaro Brown, Brandon Brownfield, Rolando Fraga Hernandez, Osvaldo Gonzalez, and Alberto Arias.

Some of Alexa Duran's family traveled from as far as New Jersey to commemorate their young relative, who would have been 22 years old if she were alive today. Though her father, Orlando Duran, says the statue was a bit off the mark in terms of capturing Alexa's appearance, its message was clear.

"The statue is a symbol. It doesn't look like anything close to my daughter, but it does represent her and the other five victims," the elder Duran tells New Times. "We don't want this to be forgotten."
click to enlarge Orlando and Gina Duran stand beside a statue of their daughter, Alexa, who died on March 15, 2018.
Photo by Joshua Ceballos

FIU interim president Kenneth Jessell, who was the university's chief financial officer at the time of the collapse and a proponent of the bridge, told attendees the statue would serve as the center of a memorial plaza for the victims and the tragedy, which he says has not been forgotten.

"This will serve as a place to remember what made Alexa so special," Jessell said. "Seldom does a day go by that myself and others at FIU don't think of what happened to Alexa and the five others."

In a corner away from the statue stood Alexa Duran's sorority sisters from Alpha Xi Delta. They cried as the statue was unveiled and the family released pink balloons into the air. In the weeks after Alexa's death, the sorority held a memorial for their sister, where she was remembered as selfless and outgoing.

Speaking to the family members of other victims of the collapse, Orlando Duran was adamant in asserting that the same fate that befell their loved ones would not be repeated.

"We are here for one reason," he told Eric Rojas-Gonzalez, Osvaldo Gonzalez's nephew. "We don't want this to happen anywhere else ever again."

Though it's been four years since the disaster at FIU, the more recent structural failure that claimed the lives of 98 people at the Champlain Towers in Surfside less than nine months ago was not far from everyone's thoughts.

"Both of those events were extremely shocking — to see them happen in our country," says attorney Paul Layne, who represented the family of FIU bridge collapse victim Brandon Brownfield. Layne works at the Silva & Silva law firm, which also represents the families of the Champlain Towers victims. "If people ignore warning signs like some of the engineers in the Champlain case, people can die. Warning signs were ignored in Surfside, and the same thing happened with the FIU bridge."

Duran tells New Times he and his wife have been in talks with the Florida Department of Transportation (FDOT) and FIU about safety measures for future pedestrian bridge projects, particularly the new bridge FIU plans to build over SW Eighth Street.

He says it's crucial that streets are closed when new bridges are installed. One of the main criticisms to come out of the bridge collapse was that vehicle traffic was allowed on the roadway as the bridge was installed. In an investigative report after the collapse, the National Transportation Safety Board argued that all of the parties involved — including FIU, FDOT, the construction companies, and engineers — had the authority to close SW Eighth Street when they noticed cracks in the bridge structure, yet failed to do so.
click to enlarge "It's still very painful. It's still a hard process," says Rojas-Gonzalez, who was an FIU student at one time. "There's not really any consolation. You just have to live day by day and step by step, believing life has a purpose for things that happen."
KEEP MIAMI NEW TIMES FREE... Since we started Miami New Times, it has been defined as the free, independent voice of Miami, and we'd like to keep it that way. With local media under siege, it's more important than ever for us to rally support behind funding our local journalism. You can help by participating in our "I Support" program, allowing us to keep offering readers access to our incisive coverage of local news, food and culture with no paywalls.
Make a one-time donation today for as little as $1.