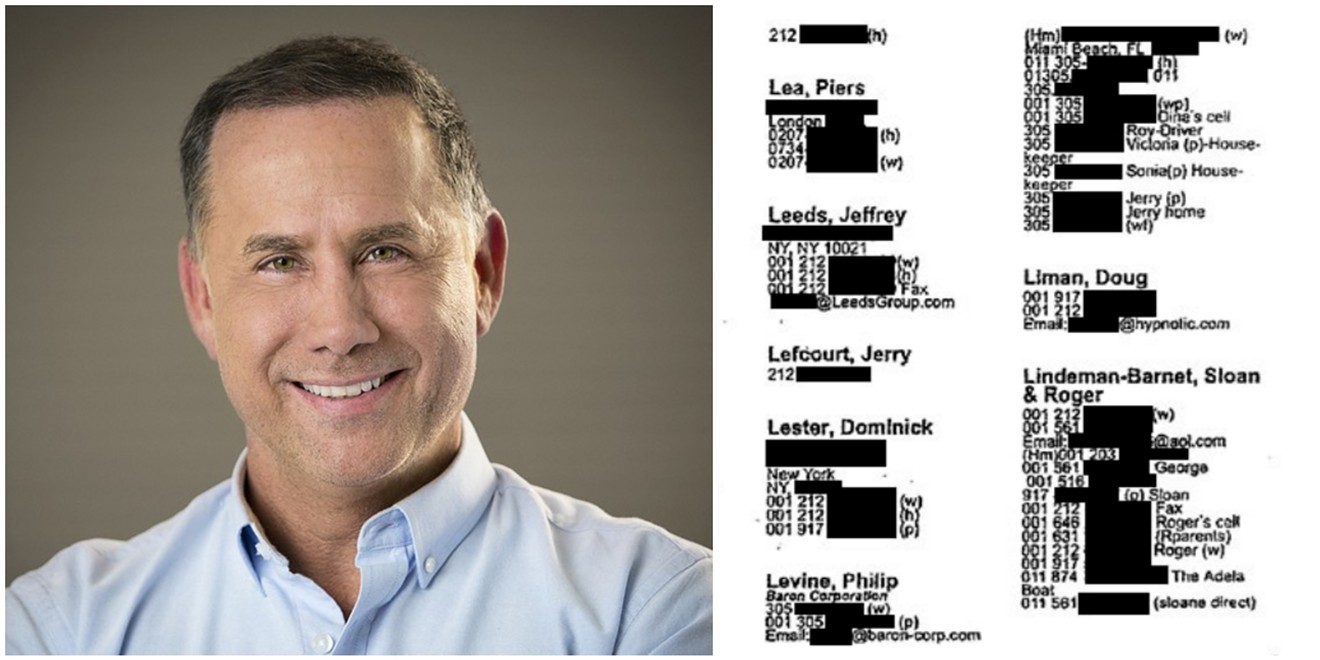 "Think I met him possibly only two or three times, but briefly maybe over 15 years ago at events," Levine wrote. "Never had a friendship or business relationship with him. Don’t remember ever giving him my full contact info but possibly did give him my contact card."

Some of those 13 phone contacts include numbers for people listed as Levine's driver and two housekeepers. Asked how Epstein obtained contact information for those people, Levine said he had no idea.

An unredacted copy of the black book was leaked online recently. The contact information in Epstein's book matches phone numbers, emails, and addresses Levine has used on multiple official government documents, including the paperwork he filed to run for Florida governor in 2018. But there is no allegation Levine knew of or was involved in Epstein's known or alleged crimes.

The now-defunct news and gossip blog Gawker first published a redacted version of Epstein's black book in 2015. It revealed Epstein had collected a smorgasbord of contact info for celebrities ranging from Hole singer Courtney Love to actors Alec Baldwin and Ralph Fiennes to former Secretary of State Henry Kissinger. There is no allegation that any of the people referenced in Epstein's contacts knew of or were involved in Epstein's crimes. Epstein was arrested this past July after a Miami Herald investigative report revealed staggering flaws in his first prosecution. Epstein then reportedly hanged himself last weekend while imprisoned in Manhattan's Metropolitan Correctional Center as he awaited trial.

But Levine's entry in Epstein's book is notable for two reasons. First, Levine is a longtime friend of Bill Clinton, one of the central figures caught up in the Epstein scandal. Clinton himself is known to have flown repeatedly on Epstein's private jet, which had been disgustingly nicknamed the "Lolita Express." Multiple Epstein victims allege that, in general, Epstein used the jet to sexually assault underage girls. Though Clinton has never been directly accused of taking part in Epstein's crimes, questions about his connection to Epstein have swirled for more than a decade — especially because Clinton has been accused of rape in a separate incident.

Over the years, Levine and the Clintons have traded political favors. Bill Clinton endorsed Levine when he initially ran for Miami Beach mayor in 2013. In 2016, Hillary Clinton used one of Levine's Wynwood properties as her Miami campaign office. Levine was a prominent surrogate for Hillary Clinton's 2016 presidential campaign and repeatedly appeared on television and at high-profile events to stump for her. Levine then ran for Florida governor in 2018 — but Bill Clinton's reputation had taken a nosedive in the post-#MeToo era, and Levine seemingly distanced himself from the Clinton family.

According to a New Times profile from 2018, Levine was born near Boston in 1962 and grew up in a working-class household before moving to South Florida and landing various jobs in the cruise industry. He then struck pay dirt when he founded Onboard Media, a lucrative company that sold magazines and ads on cruise lines. In 2000, he sold Onboard to the international luxury conglomerate Louis Vuitton Moët Hennessy (LMVH) and now runs a firm in the same field, Royal Media Partners. He's also invested in Miami-area real estate through his Baron Corporation. The profile noted that by 2000, Levine had "developed a reputation for dating beautiful women" and had at one point been engaged to the TV host and journalist Lisa Ling.


Ex-Miami Beach @MayorLevine refuses to explain why Jeffrey Epstein had 13 numbers for him — his housekeepers, driver, assistants, address, email, etc. — in his phonebook https://t.co/ntBvHzIgpX pic.twitter.com/3Yb1KdvOVx

Second, Levine's entry in Epstein's black book is particularly long. Thirteen phone numbers are listed under Levine's name, including those for Levine, his driver, two housekeepers, and multiple contacts for his businesses, including the Baron Corporation and Royal Media Partners. The book also contains his Baron Corporation email and his home address.

In text messages to New Times (via one of the phone numbers listed in Epstein's book), Levine said he had met Epstein a few times more than a decade ago at unspecified gatherings. But the former gubernatorial candidate claimed to have no idea how Epstein obtained all of the contact info under his name.

New Times called Levine multiple times, but he didn't answer. By text, he wrote, "Like I said, I don't remember ever giving him my full contact info but possibly did give him my contact card. With family out of town. Sorry. Thanks."
KEEP MIAMI NEW TIMES FREE... Since we started Miami New Times, it has been defined as the free, independent voice of Miami, and we'd like to keep it that way. With local media under siege, it's more important than ever for us to rally support behind funding our local journalism. You can help by participating in our "I Support" program, allowing us to keep offering readers access to our incisive coverage of local news, food and culture with no paywalls.
Make a one-time donation today for as little as $1.