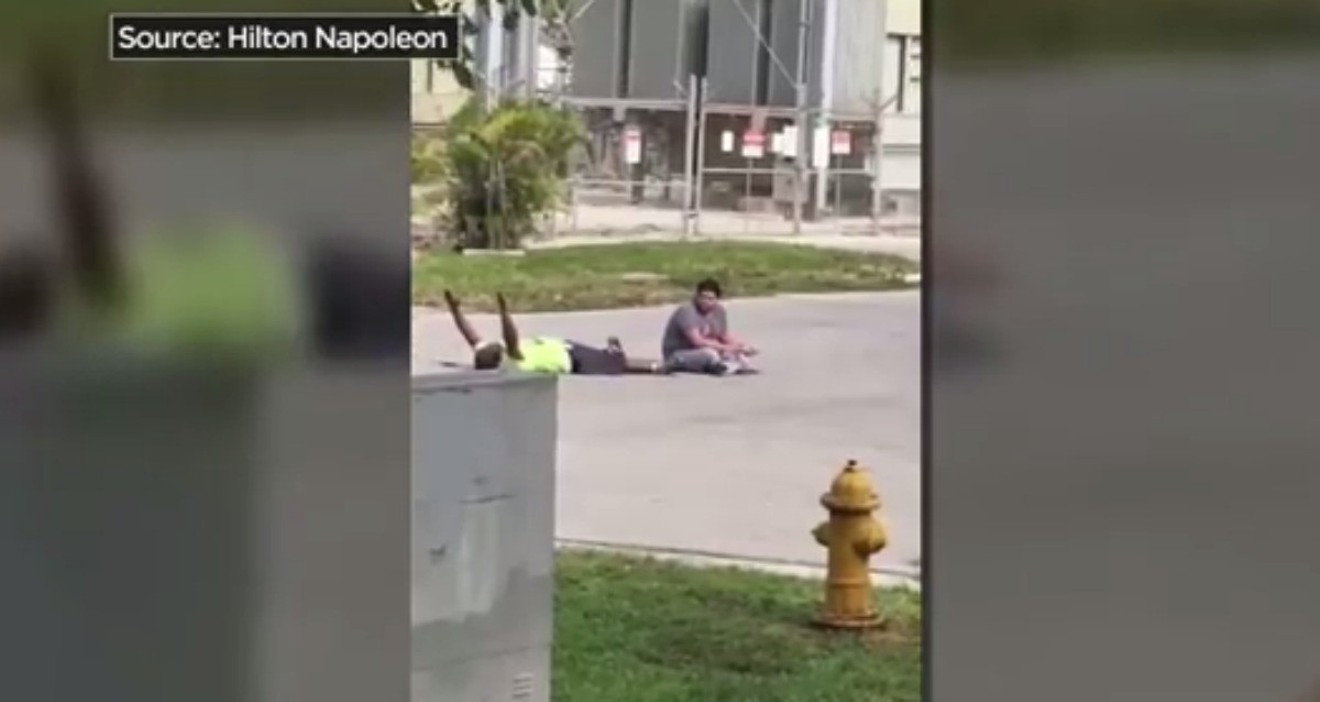 Charles Kinsey, pictured with his arms raised, was shot by North Miami police Officer Jonathon Aledda in 2016. Screenshot via Hilton Napoleon
As officers pointed their guns at Charles Kinsey during an encounter in 2016, the behavioral therapist calmly explained that he was not a threat. He made it clear that there had been some sort of mixup: Police had been dispatched under the assumption that Kinsey's autistic patient had a gun. Kinsey told them the object was simply a toy truck.

"I am a behavior tech at the group home," he enunciated in an encounter captured on video by a bystander. "That's all it is."

The image of Kinsey lying on his back in the street with his hands stretched toward the sky became iconic because of what happened next: Without explanation, Officer Jonathon Aledda fired his gun, striking Kinsey in the leg. Aledda's attorneys later said the officer intended to shoot Kinsey's patient, believing him to be a threat to Kinsey.

Nine months after the shooting, Aledda was charged with attempted manslaughter and culpable negligence, marking the first time Miami-Dade State Attorney Katherine Fernandez Rundle had charged an officer for an on-duty shooting since she took office in 1993. The first trial ended with a hung jury. A second jury acquitted Aledda of manslaughter charges and convicted him on one misdemeanor count of culpable negligence in June 2019.

After the killing of George Floyd in police custody in Minneapolis last month, the Kinsey case has received renewed attention on social media. That's largely because of the lenient sentence Miami-Dade Circuit Judge Alan S. Fine handed down: one year of probation, 100 hours of community service, and one 2,500-word essay.

Fine also stipulated that adjudication would be withheld, meaning Aledda's criminal record will not show the conviction.

New Florida Majority, an advocacy group that seeks to engage Black and brown voters, was among those reposting the details of the North Miami case on Instagram, calling it an example of the need to defund the police.

"Do ya'll [sic] remember when the cops shot Charles Kinsey, an unarmed social worker laying on the ground with his hands up trying to help his autistic patient?" the Instagram post said. "Well the cop who shot Mr. Kinsey was sentenced to write a 2,500 word essay on why shooting people is bad. It's ACTUALLY what he was sentenced to after being charged with a misdemeanor. You can't make this stuff up."

THIS is why we need to #defundthepolice. It's ridiculous that the officer basically got a slap on the wrist for putting a completely non-threatening individual's life at risk.

Although local news outlets reported the details of Aledda's sentence — and in November, followed up with a story when he was released from probation after just four months — the result of Judge Fine's essay assignment was never made public.

Citing Florida's public-records law, New Times requested the essay from the Miami-Dade State Attorney's Office. The full essay is embedded in a PDF attachment at the bottom of this post.

While the gist of New Florida Majority's Instagram post is correct, it oversimplified the instructions given to Aledda about the essay.

Court records show Judge Fine asked Aledda to reflect on "the importance of proper communication between officers arriving on scene when the situation is not consistent with the information provided over police radio," as well as "the difference in physiological response between shooting at human silhouettes at the range and shooting at a living person and its implications for accuracy at distances over 100 feet."

The judge didn't suggest that Aledda consider expressing remorse or offering an apology to Kinsey. Nor did Aledda go there.

Instead, in his six-page typed essay, Aledda explained the basic mechanics of policing, from the time the dispatch center receives a 911 call until officers arrive on the scene. He wrote that in many cases, including the call about Kinsey's patient in 2016, the information repeated by police dispatchers is incomplete or inaccurate. And he described how police radios can malfunction, breaking up communication between officers.

Moving on to the more relevant issue of how to properly handle a weapon, Aledda started off on an odd note, saying that while officers typically carry handguns on their hips, "it has become more common for police officers to have a shotgun or rifle in their vehicles to combat the increasingly violent criminal landscape." (FBI data shows that rates of violent crime have been dropping for decades.)

The next few paragraphs examined how the paper silhouettes used at gun ranges during police training are not a good approximation for real-life scenarios that require officers to decide whether to fire their weapons. Aledda concluded that "police officers are human."

"[W]hile improving equipment and training is a step in the right direction and will hopefully assist police officers in conducting their duties; one must not lose sight of the dynamic nature of police work.... [M]any times their decision to act must be made in a split second and/or with only the information they have available to them at that times [sic] which can cause misunderstandings and mistakes to occur," he wrote. "That is not to say that law enforcement officers are unprepared, negligent, or careless; but instead it should be understood that police officers are human."

In an email to New Times, Ed Griffith, a spokesperson for the Miami-Dade State Attorney's Office, reiterated the office's disappointment with the judge's sentence. Prosecutors had asked that Aledda be found guilty, sentenced to at least 30 days in jail, receive the maximum amount of probation time, and serve at least 200 hours of community service at an organization for people with disabilities.

"Instead, Judge Fine chose to sentence Aledda to a withhold of adjudication [and] one year of administrative (non-reporting) probation (which the prosecutors quickly told Judge Fine was not legal and he changed to reporting probation)," Griffith writes.

Griffith noted that the State Attorney's Office also objected when Aledda petitioned the court to end his probation before a full year had passed.

"[I]t was granted over the prosector's objections," he writes.

The Miami Herald reported last summer that Aledda was fired from the North Miami Police Department the day before his sentencing. At the July 2019 hearing, he teared up as he addressed the court.

"I was trying to save [Kinsey's] life, not injure him or hurt him in any way," Aledda said.

Kinsey, meanwhile, said he was still traumatized by the shooting, telling CBS Miami, "I can't sleep, you know. I have nightmares. I mean, it's unbearable."

Kinsey, who had filed a federal lawsuit against the City of North Miami and its officers, reached an undisclosed settlement in the case shortly after Aledda was sentenced.