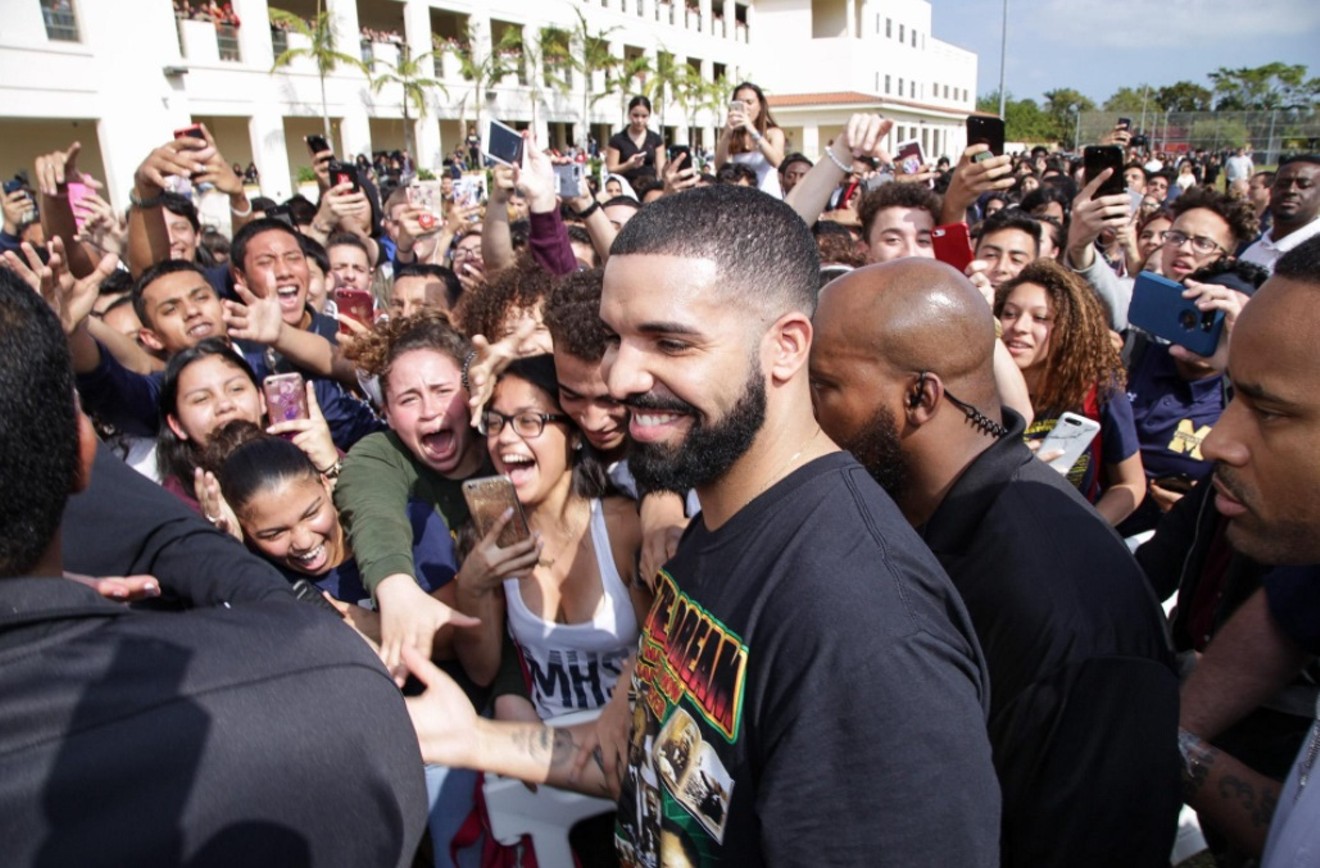 Miami-Dade County Public Schools
Being in high school sucks. You're nervous all the time, you get sweaty when Bobby from math class makes eye contact with you in the hallway, and sometimes you get shoved inside a gym locker.

But hey: If you attend Miami Senior High School, at least Drake sometimes shows up out of the blue to make a random Monday the most lit day in your young life. The 6 God has the number one song in America — a one-off single called "God's Plan" that's topped the Billboard Hot 100 thanks to an astronomical number of plays on streaming services such as Spotify. Number one singles call for number one videos, and Drizzy apparently flew to Miami to make a few hundred high-school kids lose their absolute marbles for a few hours.


Say what you want but @Drake said the high is the best high school in Miami pic.twitter.com/DPFnAfGBR7

Drake was really at Miami High for this music video bro pic.twitter.com/oK2wFtS9wE

Miami Senior High has actually been used for other music-video shoots. It's a beautiful campus with breezeways and tastemaking students with encyclopedic pop-music knowledge. *Nsync even filmed a video there with Gloria Estefan in 1999.

For his shoot, Drake performed on a crane while a drone buzzed around his head for some reason. Afterward, he whipped out a gigantic check with his October's Very Own owl logo on it, donated $25,000 to the school, and then took things to the next level by announcing OVO will design the school's new uniforms.


@miamiseniorhigh will be the first high school in the U.S with school uniform made by @Drake @welcomeOVO pic.twitter.com/KFSh0PvRP6

From there, Drizzy popped over to the University of Miami in Coral Gables. According to the school's student newspaper, the Miami Hurricane, rumors swirled around campus that the Donna Shalala Student Center had been shut down for some sort of film shoot — the Hurricane snapped photos of Cash Money Records employees posting signs around the building that anyone standing in the center was consenting to being filmed. The Hurricane said Drake also gifted a UM predentistry student with a $50,000 scholarship.

The rapper eventually popped out onto the student center's Moss Terrace to perform for the shoot. By then, a massive crowd had gathered, and he chucked up a "U" sign to make everyone go :

THROWING UP THE : @Drake shows some UM pride during his performance on the Moss Terrace. pic.twitter.com/KQ9W0455fC

HAPPENING NOW: students singing to @Drake who is on the Moss Terrace in the Shalala Student Center. pic.twitter.com/VvNxYUQNhN

HAPPENING NOW: students singing to @Drake who is on the Moss Terrace in the Shalala Student Center. pic.twitter.com/VvNxYUQNhN

The Hurricane also hung around the quad interviewing students who'd witnessed the event. The kids basically acted as if they'd been touched by the pope:

The shoots thankfully, way more fun than Drake's 2011 "I'm on One" shoot, where he, DJ Khaled, Lil Wayne, and Rick Ross simply hung out in Drake's real, unfinished Miami apartment and stared into the distance while it rained outside. The members of his entourage looked like they'd just watched Requiem for a Dream and were trying not to cry.

How was this all just on a random Monday? is canceled this week. Everyone go home.